Plans to add an extra floor to a modern building in The Lanes were turned down because of the impact on a conservation area.

A company called Dawn View Ltd applied for planning permission to add an extra floor of office space and a roof terrace on Nile House, a 1980s block in Nile Street, Brighton.

Officials advised the Planning Committee to reject the scheme.

Green councillor Tom Druitt supported the application, saying that it would rejuvenate an “unloved part of The Lanes”.

He said: “It is a real tragedy we have such a resource going through quite a downhill period.

“This is for more than a roof extension. It will justify more than £5 million of investment, bringing the building up to modern standards.”

Councillor Druitt said that many of the ground floor units were empty and the landlord was in talks with Caffe Nero about its future at the site.

Mike Ford, of Morgan Carn architects, spoke for the applicant and said that the proposed terrace was not intended as a meeting space but as a small spill-out space with a pleasant view.

Mr Ford said that the extra floor would be set back from the listed building at 16 Prince Albert Street.

Planning officials recommended refusing the plans because they would obstruct the “traditional and historic roof forms” of the surrounding properties when viewed from Black Lion Street and Prince Albert Street.

Conservative councillor Joe Miller said that more office space was needed but he was concerned about noise.

He said: “I do agree with the heritage team. I do not think it is appropriate to have a roof terrace.”

Independent councillor Tony Janio disagreed about the noise and said: “If there is sound on the roof terrance, you would struggle to hear it at street level.

“There is nowhere you can see the facade of this building. It is unremarkable and we would get a new office development.” 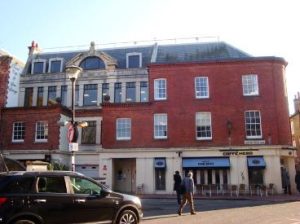 Green councillor Phélim Mac Cafferty said that there was a need to support small businesses in the area but not at the cost of conservation.

He said: “We have a lot of policies on the impact of roofs on conservation areas.

“We have really strident policies on architectural features on listed buildings and conservation areas.

“We should not be changing the roof form on a building by a listed building in a conservation area.”

He added it would harm the integrity of the building.

Labour councillor Daniel Yates also opposed the plans. He said: “I am not convinced there is a need for office roof terrace facilities in the city.

“I am convincing it would add to a 1980s building or add to the amenity of people in offices on other floors.”