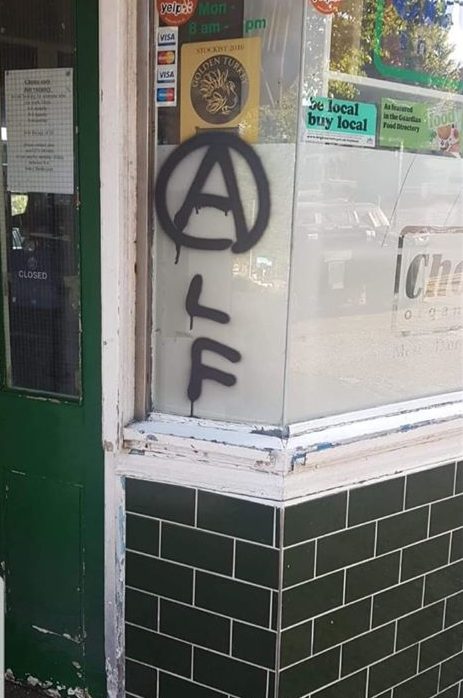 Graffiti was sprayed on the Choice Cuts Organic Food Centre

Two Brighton businesses had their windows smashed in within days of each other this month.

Choice Cuts Organic Food and Reptylers, both near Preston Park, both had their windows smashed in.

Reptylers pet shop in South Road was hit on Saturday, June 20 at 1.30am when a window was smashed with a large rock.

Choice Cuts in Preston Drove was attacked overnight from Sunday, June 21 to Monday, June 22 when as well as smashed windows, graffiti reading ALF – or Animal Liberation Front – was sprayed on the front door.

Both businesses reported the vandalism to Sussex Police, but were told there was not evidence to pursue an investigation. The force is not linking the two incidents

The smashed window at Reptylers

Jessica Mallows from Choice Cuts, who lives above the shop with her children, said: “It caused quite a lot of damage and we had to get rid of some stock because the glass went over it.

“We have not had anything like this for years since my dad had the windows put in 20 years ago.

“We have got such a good community around here being so supportive. We have gone above and beyond in lockdown to get things for our customers and then things like this puts a bit of a downer on it.”

Luke Tyler from Reptylers said the rock had caused up to £1,500 worth of damage, which he will have to foot himself as he cancelled the shop’s insurance when lockdown started in March to save money.

He said: “We only opened during the lockdown because our other business [taking reptiles to schools etc] had stopped.

“I don’t believe it’s random as the rock they used was quite heavy and big and didn’t look like it came from anywhere in our road.

“I assume we were more of a target than a random attack.”

A police spokeswoman said: “Sussex Police received a report of a window being smashed at a business premises in South Road, Brighton, in the early hours of Friday, 19 June.

“No viable lines of enquiry were identified and the matter has been filed pending further information.

“Anyone who witnessed any suspicious behaviour in this area at this time should report it online or call 101 quoting 357 of 19.06.

“Sussex Police received a report of windows being cracked and graffiti at a business premises in Preston Drove, Brighton.

“The damage is believed to have been caused between midnight and 7am on Monday, 22 June.

“No viable lines of enquiry have been identified and the case has been filed pending further information.

“Anyone who witnessed any suspicious behaviour in the area at the time can report information online or by calling 101 quoting reference 193 of 22/06.”