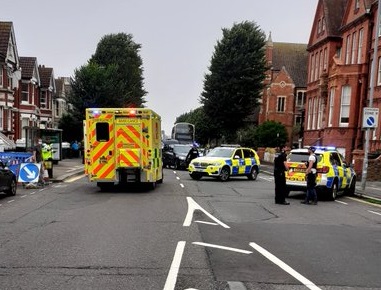 Armed police have closed a busy Hove road after a man was reportedly attacked.

Buses are being diverted from Portland Road because of the incident at the junction of Westbourne Street, which happened shortly before midday.

Four police cars and two ambulances were at the scene at midday.

Elaine Evans was on the number 49 bus which was stopped by police. She said: “There were armed police standing next to the police car, and three men in handcuffs.

“The police took handcuffs of of the them and he was allowed to go, but the other two were up against the police car.

“The ambulance was there, and a man who I imagine was the one who was attacked sitting looking very dazed with blood on his forehead.”

❗ Due to a police incident at Westbourne st, #BH49 services are diverted in both directions. Westbound services will carry along Church road into New Church road then right into Westbourne Gardens and left onto Portland road where they will resume their normal route. ❗

On Monday, a spokesman for Sussex Police said: “At 11.30am on Saturday (4 July) police were called to an address in Portland Road, Hove, after a 40-year-old man living there had sustained a head injury.

“He was treated at the Royal Sussex County Hospital where his condition was not described as life threatening. An investigation is under way to establish the cause of the injury and the full circumstances.

“The man was discharged from hospital on 5 July and enquiries continue to establish how he came by his injury and whether or not a crime was was involved.

“No arrests and no weapons found.”