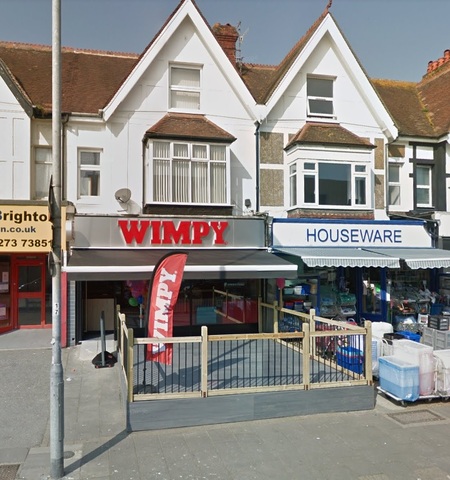 A Wimpy restaurant has lost its alcohol licence after a catalogue of breaches uncovered after an attempted rape on the premises.

A panel of three Brighton and Hove City Councillors agreed the multiple problems occurring during a short period at the Portslade branch was too severe for a yellow card warning.

Sussex Police called for a review into the Station Road, Portslade, Wimpy’s licence after the attempted rape at the business on 8 March.

Investigations revealed two of the three staff working at the site were undocumented illegal immigrants.

Officers also discovered the designated premises supervisor Ketheesan Tharmasseelan, who is supposed to have day-to-day responsibility for alcohol on the premises, did not realise he was responsible for the Portslade outlet.

Brighton and Hove City Council licensing department sent a formal warning to the premises licence holder Kapilraj Vigneswaran in January after a routine licence check found there was no evidence of working CCTV or record of staff training.

Mr Vigneswaran took over the licence in October 2019 and did not declare a drink-driving conviction, which is another breach of licensing law.

During the review hearing on Tuesday 7 July, Sussex Police’s barrister Peter Savill told the three-councillor licensing panel the attempted rape was a “ghastly demonstration” of what could happen when licence holders fail to obey the rules.

Mr Vigneswaran’s barrister Duncan Craig said his client had installed CCTV after receiving the warning letter, but this was removed before the offence.

In its decision, the panel said: “Overall in relation to this review the panel find the evidence of the police and those supporting the review to be compelling and proof of a complete failure of management in relation to these premises which has had serious consequences and undermined the licensing objectives.

“The panel appreciates that the licence holder was not in the country at the time of the incident on 8 March, but the management of the premises remained his responsibility, and it was his failure to discharge that responsibility and manage the premises in accordance with the legal requirements that led to the incident.

“He did not, for example, have a working app connected to the CCTV system when he went to India, which was, as it turned out, a very significant failure.”

Mr Craig asked for a three-month suspension, but the panel did not consider this action appropriate considering the number of serious failures within less than six months.

Mr Vigneswaran has 21 days to appeal the decision.

He is treated as an absconder by the Immigration, Compliance and Enforcement service after overstaying a visitor’s visa in 2010.