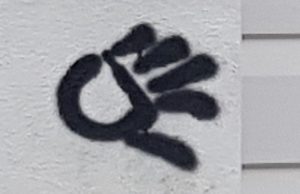 A graffiti tagger from Brighton has been landed with a bill for £2,000 after going on a spraying spree across Hove.

Sussex Police said: “A man who sprayed graffiti on a bed shop and properties in Hove has pleaded guilty in court to 11 counts of criminal damage.

“The court heard that Carvell initially sprayed graffiti on the Brighton Bedding shop, in Portland Road, Hove, before going on to daub properties with his graffiti tag in Portland Road and the Poets Corner area of the city causing hundreds of pounds worth of damage.

“Investigating officer PC Andy Newman said that Carvell was identified as a suspect as he used his own personalised tag on numerous front walls and shops fronts in September last year.

“Magistrates ordered Carvell to pay his victims a total of £1,940 in compensation and £85 court costs.”

Brighton and Hove divisional commander Chief Superintendent Nick May said: “We are determined to bring to justice anyone who commits offences of criminal damage in the city.

“The graffiti and tagging does have victims as their property is damaged and defaced.

“The presence of such graffiti also makes the area feel uncared for and unsafe for our communities.

“We are determined to work with Brighton and Hove City Council and other partners to improve this situation and take tough action to prevent offences – and when we have the evidence to take matters to court.”