Plans for a £67 million housing scheme are due before councillors next week – with an offer of more than 200 flats in blocks up to 18 storeys high close to Hove station.

Officials have given their backing to the “build to rent” project, subject to conditions, including an agreement that 10 per cent of the flats will be “affordable”.

Tenants in the affordable flats should pay rents set at 75 per cent of the “market” rate for the proposed “Hove Gardens” complex in Ellen Street, backing on to Conway Street.

And a report to councillors said that the company behind the scheme, Watkin Jones, may be asked to hand over “developer contributions” totalling almost £800,000.

Almost £500,000 of this money would go towards sport, recreation and open spaces while a further £125,000 would be available for schools such as Hove Park and Blatchington Mill.

At least 10 of the flats are expected to be wheelchair accessible.

The scheme also includes community rooms, commercial units for shops, offices or cafés – and a basement car park, with space for 36 cars, including 20 for blue badge holders, and 323 bicycles.

The site’s previous owner, Matsim, owned by the Lambor family, already had permission for 186 flats in a 17-storey scheme.

The Matsim scheme was approved by a government planning inspector in January last year after the council refused permission because the plans included too few affordable homes.

The current plans, which include cream or white buff bricks and green ceramic tiles, took shape after feedback from design experts.

Three letters of objection have been sent to Brighton and Hove City Council, criticising the height, scale and design of the scheme.

They criticised the lack of affordable housing – government policy is for at least 20 per cent of the homes to be affordable in a “build to rent” scheme where viable. In a conventional scheme, the council has a 40 per cent target.

The report said that Watkin Jones may be allowed to pay a “commuted sum” for affordable homes to be built elsewhere in Brighton and Hove. 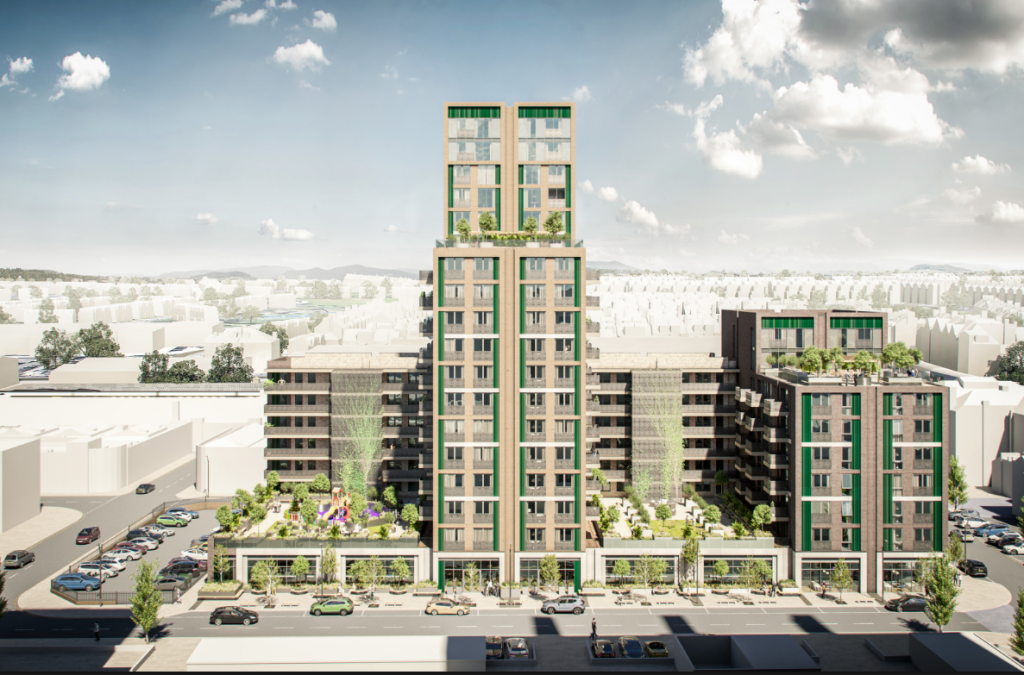 Objectors were also worried about a lack of parking and increased traffic, the impact on “heritage assets” to the east and the impact on “the amenity of surrounding residents”.

A report to the council’s Planning Committee said: “This site lies immediately to the west of the Hove Station Conservation Area, which adjoins the Denmark Villas Conservation Area to the east.

“The special character of the Hove Station Conservation Area derives from the relationship between the station itself and the surrounding late Victorian buildings which connect the station with the main part of the town along Goldstone Villas.”

The council has received one letter in support of the project from the public and a further supportive letter from the three ward councillors – John Allcock, Marianna Ebel and Jackie O’Quinn.

The Ellen Street site has been used for warehousing and is currently overshadowed by 10-storey Livingstone Court – part of the Clarendon Estate.

The plans are due to be decided at a “virtual” meeting of the council’s Planning Committee which is scheduled to start at 2pm next Wednesday (2 September). The meeting is expected to be webcast.