People living in streets where not everyone has a green council wheelie bin say that binmen have refused to take their rubbish for three weeks.

Residents are kicking up a stink over what appears to be an unofficial boycott by binmen in streets between Viaduct Road and Ditchling Rise, Brighton.

Some people, who are allowed to leave their rubbish in traditional metal or plastic bins, said that they first found that they weren’t being emptied early last month.

When people challenged the refuse lorry crew about unemptied bins, the binmen said that drivers had ordered them to collect from wheelie bins only.

Gerard Street residents Pete and Elaine Webster ended up putting their black bags into the dustcart themselves on Monday (7 September).

Mr Webster said that he had tried for three weeks to persuade the binmen to take their rubbish.

When he spoke to them on Monday, the driver told Mr Webster that the crew would collect only from wheelie bins.

But Mr Webster said that he had received an email from Brighton and Hove City Council saying that their rubbish would be collected even from homes without a green bin.

He said: “We’ve been reassured our refuse would be taken and they will continue to take waste while we wait four to six weeks for a wheelie bin.

“The first week they didn’t take it. Last week they took it because I was talking to them and this week I had to do it myself.”

The Websters and their neighbours have contacted Cityclean and their councillors about the stand-off.

Green councillor Sue Shanks, who represents St Peter’s and North Laine ward, said: “What I have done so far is find out that the crew action was not an official council one.

“They have been told they must collect the rubbish as usual and residents will be given green bins when there is availability.”

People in Shaftesbury Road, Warleigh Road and Vere Road were equally frustrated to find their bins left full of rubbish on collection day. 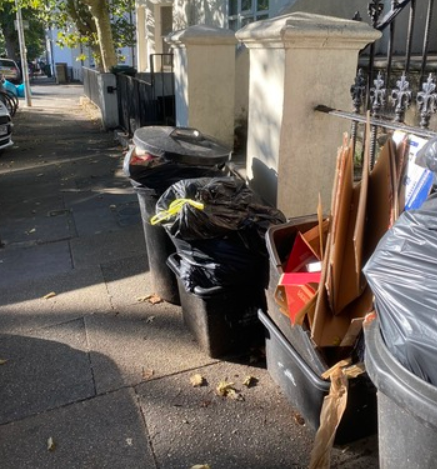 Green wheelie bins have never been compulsory in the area because most of the houses have been converted into flats and do not have front gardens.

Most of those with wheelie bins store them on the street where they block the pavement.

One resident, who did not want to be named, said: “The bins are a health hazard and breach covid rules.

“They block pavements making social distancing only possible if you walk in the roads. Passers-by use our bins incorrectly all the time, contaminating the recycling.”

GMB union boss Mark Turner said that there was no industrial action of any sort, either official or unofficial, by his members working at Cityclean.

He said that there were health and safety concerns for crews when it came to emptying anything other than an official council wheelie bin. He said that the trucks were not designed to accept bin bags as the backs were closed.

Mr Turner said: “The crews would be instructed by the service that they have to collect from a wheelie bin if there is a wheelie bin provided.

“The crews are not staffed up to collect by another method.

The council said: “We apologise to residents whose bin collections have been disrupted. This is due to health and safety concerns raised by the crew about emptying the bins.

“We are working with the crew and unions to ensure full collections are resumed next week and properly maintained.”

The council added: “We are also exploring options to improve the collections service in this area and are hoping to consult staff, trade unions and residents in the near future.”