A Brighton charity has raised more than £13,000 in just five days as part of its effort to provide food for children who are entitled to free school meals.

Chomp thanked donors and called for a co-ordinated city-wide response to help families in the school holidays like the half-term break.

Chomp project lead Vanessa O’Shea said: “When we heard that the government weren’t going to extend free school meals vouchers throughout the half term, I just set up the Just Giving page and thought, we’ll just do it ourselves.”

Over the weekend, the wave of public feeling about became apparent, not least with food businesses from across Brighton and Hove posting offers of free and discounted food to eligible families.

And since Chomp was mentioned on the Brighton and Hove City Council website, the charity became inundated with new requests for help with food.

Vanessa O’Shea said: “We were overwhelmed by the generosity of people in Brighton. Because we are a small team reaching out to a lot of families … things were crashing and there were a few problems with the logistics of it all.”

But the charity decided to ensure that £15 food vouchers were offered to all of their current 200 families in need while referring new inquiries to the council.

One mother of two, from Hove, who received her voucher on Monday, said: “I started receiving food from Chomp three years ago when I was living with two children in one room.

“Now my children are aged 4 and 6. I can’t drive due to my medical epilepsy and therefore there’s not so much choice of where I can go to buy food.

“I also can’t afford to do online shopping which requires you to spend at least £40 at one time.”

Although the charity received extra funding from the council during lockdown, it mainly relies on charitable grants such as those from the likes of the National Lottery and Children in Need.

Vanessa O’Shea said: “We have done what we can at Chomp – but we are just one small resource.

“We need the city to come together now with a more co-ordinated, joint response in order to provide free school meals for kids.” 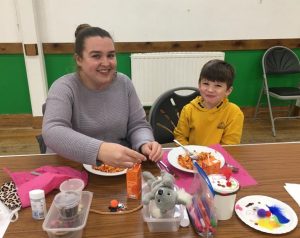 The club’s chair Imogen Wallace said: “We wanted to broaden the membership of the club and offer people from different backgrounds access to running.

“And to make it more accessible to women from different areas of the city, we decided to hold it at the seafront.”

The council said: “We don’t want any child to go hungry this half term. Help is available in the city for those in need.

“The national campaign against food poverty led by Marcus Rashford has highlighted the harsh reality faced by families reliant on free school meals during the school holidays.

“This year, the pandemic has added to the pressure on families to manage over the school breaks. Struggling to buy food is sadly increasingly common and could happen to anyone.”

The council also said: “Brighton and Hove Food Partnership has a wide range of information about local food banks and hubs that are running in local neighbourhoods across the city.”