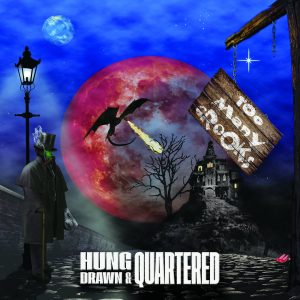 Album review – Hung, Drawn & Quartered by Too Many Crooks

Five stars out of five

If you live in Sussex and love ska, you’ll be a Too Many Crooks fan.

This is the fifth album from the Sussex-based seven-piece but if you’re expecting traditional ska beats and nothing more, you’ll have to open your lugholes a bit wider.

Hung, Drawn & Quartered is more of a cinematic concept album than ska by numbers. Having five songwriters and four singers in the band means the album segues seamlessly from one theme to another driven by the rattling tubs of Whitehawk’s own MM McGhee.

And when you’ve got so many songwriters in one band, it isn’t any wonder the album shines in the eternal fight to show off the most.

Kicking off with The Great Pretender, written by Marlon Johnson, the Crooks mash up Madness with Sergio Leone before launching into Alan Perry and Bradley Tullett’s Behind You, a camp Halloween knees-up Bobby ‘Boris Pickett’ would be proud of.

Dave ‘Cookie’ Cook then kicks it punk rock style with Ifs & Buts And Maybes – a one-minute, 30-second dust-up between the Ruts and Rezillos before Tony Fish (no relation) takes us back to classic Madness-era ska with The Sentinel before the band swings ice rink-style into House On The Hill.

Other stand-out tracks include spaghetti western-inspired, seven-minute operetta Son Of A Gun, featuring rip-roaring guest vocals from Lynn Stenning, and Cook’s atmospheric builder Blow It All Away, which reminds me, whisper it, of The Astronauts (there’s no higher praise from me).

With two Fish Brothers stuffed into the space, what a cracking hairy stocking filler. Why, it’s even got a Krimbo song. Ding dong verily.

The album is available to buy on Spotify.