Brighton roads were closed and an innocent man was arrested after a 999 hoaxer said that he had seen a man waving a machete around. 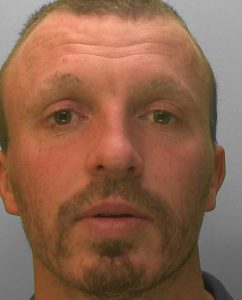 Ashley Hall, 26, a labourer, made the hoax emergency call out of spite having fallen out with a colleague at work and because he wanted to get him into trouble.

Hall said that he had seen a man wave a machete out of a car window and gave the police his colleague’s number plate details.

The claim was serious enough for police to trace the car to Brighton where they closed roads so that they could safely detain a suspect they believed to be armed.

The innocent victim was shocked to be arrested by armed police but Hall had not told police that he knew the man he had falsely reported.

Hall pleaded guilty to perverting the course of justice when he appeared before Judge Anne Arnold at Hove Crown Court on Wednesday 2 December.

And on Friday 26 February he was jailed for 10 months by Judge Mark van der Zwart at Lewes Crown Court.

Sussex Police said: “A man who made a hoax call in attempt to get his colleague into trouble with police has been jailed for 10 months.

“Ashley Hall, 26, a labourer, of The Nurseries in Bognor Regis, dialled 999 at 4.07pm on Friday 26 June and reported seeing a man waving a machete out of the window of a car in the Burgess Hill area.

“Due to the seriousness of the report, this triggered a significant emergency response involving over 20 officers, including armed police.

“The defendant gave officers the vehicle registration and it was traced to a location in Brighton, prompting police to close roads so the suspect, thought to be in possession of a weapon, could be safely detained. At no point did he claim to know the victim.

“The victim was detained in Brighton and interviewed by officers who determined he was not in possession of a weapon and had not been in Burgess Hill at the time of the allegation.

“In police interviews, Hall admitted the report he made to police about the victim was untrue.

“He confessed that he wanted to get the victim in trouble following a workplace disagreement and wished to scare him by calling police.”

“Our priority is to ensure callers get through as quickly as possible so we can respond swiftly to genuine emergencies and be where we are needed the most.

“We will not let people get away with putting lives at risk through hoax calls and I’d like to thank the officers who worked on this investigation and helped to bring Hall to justice for his irresponsible actions.

“We take every call we receive seriously so would urge people to make the right call and please only dial 999 in a genuine emergency. For non-urgent police matters please report online or call 101.”