The team behind the transformation of Circus Street, in Brighton, said that work had been completed on building 142 “green” homes and 450 student bedrooms. 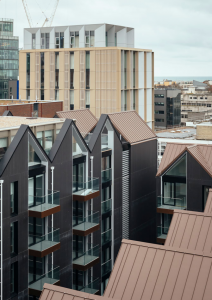 The regeneration specialist behind the £130 million project, U+I, estimated that it would create 400 jobs and add more than £200 million to the local economy over the next 10 years.

As well as the student flats, the former fruit and veg market site includes a 30,000 sq ft office building and a new cultural hub for South East Dance.

U+I worked with Brighton and Hove Council as well as masterplanners ShedKM and architects TP Bennett.

They said that, of the 142 “green” homes, 114 were build-to-rent flats which would be operated by M&G Real Estate. The four blocks of flats also include 28 “affordable” homes.

U+I development director Rob Sloper said: “Completing the new homes at Circus Street is an important step as part of the transformation of this strategically important site in the city as we look forward to the opening of the new office and dance space later this year.

“The relationships we have built with Brighton and Hove City Council and the local community have helped us to create an exciting and thriving place which will be home to healthy and happy community. We are exceptionally proud of what we are delivering in, and for, Brighton.”

ShedKM director Hazel Rounding said: “In order to deliver the ambitions of place, ShedKM championed a holistic approach to placemaking across the entire Circus Street development, knitting individual buildings and a wide mix of uses together in a coherent, accessible and welcoming scheme which puts people first.”

They said that the whole scheme had been rated “BREEAM Excellent”, recognising the green credentials of the highly energy efficient buildings.

As well as solar panels providing green energy, there is a “green roof” system aimed at encouraging biodiversity.

They added: “The neighbourhood is formed around two new planted urban squares, in an area previously lacking in green space.

“The green spaces have been designed with the wellbeing of the community in mind. 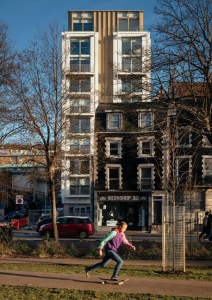 “Planting strips create privacy buffers but also contribute to the enhanced public realm, much like the tight hedge planting in front of many of Brighton’s terraced streets.”