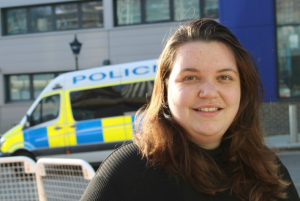 Below are the responses from Green candidate Kahina Bouhassane.

Despite the hard work of many officers, policing is broken in Sussex. Over 10 years of Tory leadership and austerity has left a system that is not working. Crimes are going uninvestigated and it’s our local community that suffers.

I want to speak up for people who aren’t being heard. The system is catastrophically unfair for Sussex’s rural communities and black and minority ethnic groups and it leaves women and those identifying with other marginalised genders vulnerable.

I’m committed to making Sussex Police a police for the people.

I’ve got personal, lived experience of the problems with crime and policing in Sussex and a passion and energy for reform.

As a mixed-race woman, who has lived both in rural Sussex villages and big cities, I have seen all too often how inequality in our criminal justice system affects people who fall outside the demographic majority.

I’ll bring the perspective of a warm, listening, human face, not a career politician.

I currently work in a school, supporting the learning and development of children on the autism spectrum and worked extensively as a freelance journalist before moving to education.

I’m committed to meeting with Sussex communities every day and bringing your voice into decision-making.

In short, nothing and no. Greens believe that the role of PCC should be abolished, returning oversight and accountability to locally elected councillors via a panel and leaving operational policing to the experts.

The PCC posts have been a costly failure with low election turnouts and limited public accountability.

While I would use my term of office to address the fundamental reforms needed to our policing, I would also work for the position itself to be abolished.

The position of PCC should be scrapped completely, with oversight and accountability given to a politically balanced panel of elected local councillors.

But while the post exists, there definitely should be term limits. The role is there to serve the needs of the people of Sussex, not to provide a cosy job for a career politician.

As a mixed-race woman myself, I’d say that I understand your wariness and that reform is needed to build trust between the police and communities who suffer structural – and overt – racism.

I recently challenged the current PCC directly at the Sussex Police and Crime Panel over the fact that black people are 10 times more likely to be stopped and searched than white people in Sussex.

Outrageously, Ms Bourne claimed that this is “proportionate” and denied that the practice is discriminatory. I couldn’t disagree more strongly.

I very much recognise the unequal treatment you describe. I’ve found it deeply upsetting and unacceptable. Everyone should be treated equally before the law.

An aggressive approach to peaceful protesters for equality, human rights and the planet, while not pursuing clear cases of hate crime, is not the policing that we need.

My focus would be on safely facilitating lawful protest and protecting public safety and human rights.

Finally, the right to protest is a cornerstone of our democracy.

The government’s attempts to silence dissent using the Police, Crime, Sentencing and Courts Bill is a disgrace. It must be resisted.

I would work with partners to

In addition, I will put in place measures to further support gender parity within the force itself. Recent figures indicate that less than a third of Sussex Police officers are women, falling to less than one fifth at inspector level.

This was a shocking case, and my heart goes out to Ms Grice’s family and friends. The police repeatedly got it wrong.

Stalking and violence against women are incredibly common and women are being failed.

Sussex Police recorded 2,020 stalking incidents in the year to March 2020 yet – during 2020 – only 29 stalking protection orders were issued.

Regular training and an assumption that victims should be taken seriously are clearly needed.

We also need to address gender imbalance within Sussex Police. While it’s great that three of the very top ranks are held by women, there are twice as many men as women in the force as a whole and – at inspector level – men outnumber women by four to one.

This is one reason that the post of PCC should go and greater oversight by Sussex councillors should return.

In the meantime, Sussex’s community safety partnerships are critical to ensuring this local join up.

As PCC, I’ll be actively seeking out conversations with residents across Sussex to understand those neighbourhood priorities and encouraging a hands-on listening approach across the force.

It’s about getting smarter, more targeted and fairer.

We need to stop wasting police time on disproportionate stop and searches of young black men or on people found in possession of very small amounts of soft drugs and employ more responsive rural crime specialists, for example.

But this is partly about demanding a bigger pie than simply dividing up the existing one.

Another four years with a Tory PCC, unwilling to stand up against Tory government cuts, isn’t going to deliver that. I’ll fight for the resourcing for Sussex that we really need.

I’m very committed. There is no excuse for those who would flout the law in order to barbarically abuse wild animals.

The evidence is clear that the criminalisation of the drug trade does little to address the harms of abuse, directs major profits to violent organised criminal gangs, drains significant police resources and leaves significant numbers of casual users with a criminal record that harms their life chances.

The Green Party believes in a legalised and regulated system.

As PCC, I would seek to explore how we can direct resources towards tackling the violent and exploitative practices of organised crime (such as county lines) and focus on treating the harm done by drugs to some users as a public health issue.