A “county lines” drug dealer has been jailed for three years for peddling heroin and crack cocaine in Brighton. 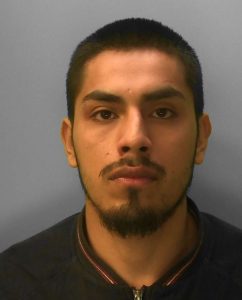 Sussex Police said today (Saturday 12 June): “A man has been jailed following a Sussex Police investigation into the supply of class A drugs in Brighton.

“From July 2019 to January 2020, Godoy-Lojan was found to be operating a drug line under the name ‘Colombian Mitch’.

“Detectives linked him to a phone number used to carry out drug deals through telecoms analysis.

“Through a series of searches conducted in relation to the investigation, significant quantities of heroin and crack cocaine were seized from addresses in Brighton.

“Godoy-Lojan pleaded guilty to the offences and was sentenced to three years’ imprisonment.”

Detective Constable Mark Pinder said: “Drug dealing will absolutely not be tolerated in Brighton and Hove and every day our officers are out in uniform and plain clothes working to keep this city safe.

“We’re pleased the court has recognised the impact of the defendant’s actions on the local community by serving him with a significant custodial sentence.

“The investigation is a continued effort by Sussex Police to robustly target and dismantle ‘county lines’ that are adversely affecting our communities.

“Anyone with information about drug dealing is urged to report it to us online or by calling 101 so we can take action.”