A Brighton takeaway has been refused a late-night delivery licence because of a lack of parking spaces. 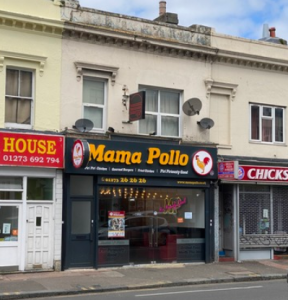 Mama Pollo franchise holder Noorullah Khan wanted to offer deliveries from the new Lewes Road branch until 2am on weekdays and 3am at weekends.

Sussex Police opposed the application, saying that delivery drivers were “taking over” and the southern end of Lewes Road lacked parking spaces.

But police licensing officer Mark Thorogood told the licensing panel that parking on those streets was restricted to those with residents’ permits.

He said that the branch was also in a wide area of Brighton and Hove that had been designated a “special stress area” because of problems with crime and public nuisance.

Brighton and Hove City Council restricts new licences in the special stress area and, at a hearing earlier this month, the panel suggested an earlier closing time for the peri-peri chicken outlet.

The panel has since sent Mr Khan its decision in a letter which said that the takeaway’s late hours and the effect of deliveries into the early hours were causes for concern.

The panel, made up of three councillors, said: “It is the delivery aspect that is of most concern to the panel in this location.

“There is extremely limited ability to stop and park close to the premises so that this is not a good location for such an operation, especially late at night.

“The panel share the police concerns in this respect and agree that there are no appropriate conditions to mitigate these concerns.

“The panel believes granting this application would impact negatively on the area, which is an area of concern, and undermine the licensing objectives, particularly the prevention of public nuisance.

“The panel would be prepared to consider an application that fell within the policy, with late-night refreshment until midnight.”