The council has ramped up the price for members of the public wanting to “sponsor” or plant a tree in their street.

The price went up from £400 to £5,000 for each tree earlier this year, causing frustration and disappointment among members of community groups, a councillor said yesterday (Tuesday 22 June).

Conservative councillor Robert Nemeth said that some groups had hit fundraising targets, only for the goal posts to be moved.

It meant an end to the public’s involvement in a community good, he said, and was an injustice that needed to be put right.

He called for a report to outline solutions – a move backed by Labour and the ruling Greens.

Councillor Nemeth spoke out at a meeting of Brighton and Hove City Council’s Environment, Transport and Sustainability Committee at Hove Town Hall.

But for community groups saving up, he said, it was frustrating after the fees increased “ten-fold”.

He said that he was also frustrated by the lack of response to inquiries about funded projects for trees in Stoneham Park, Portland Road, Mainstone Road and School Road.

Councillor Nemeth said: “The great injustice though is a scheme the residents have paid for in Glebe Villas where they now hear on the grapevine that the council fee has increased from £10,000 for about 20 trees, to £100,000, which is never going to happen.

“Funds have been raised, locations have been planned and measurements have been taken by the council but the fee has gone up by £90,000.

“The £10,000 the residents have raised gets them two trees which is just laughable.”

Speaking outside the meeting, Councillor Nemeth said that Andrew Nichols, of Hove Civic Society, had described the increased costs as a “major stumbling block” that would undermine community involvement.

He also said that Lara Rix-Paradinas, of Glebe Villas, who had worked for three years to have trees planted along the street, described the increased costs as a “death knell” for any community trying to raise money for trees. 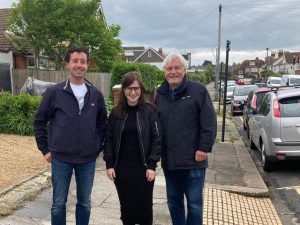 Green councillor Amy Heley, who chairs the Environment, Transport and Sustainability Committee, backed Councillor Nemeth’s call for a report into charges, after a similar situation in her ward, Preston Park.

She said: “I do understand the frustrations for residents. I’m told historically there has been a lot less interest in residents donating street trees and the previous method used were low-quality and low cost.”

She said that the council’s £15,000 tree planting budget was not enough with high demand and improved planting.

Planting on highways required the inclusion of root barriers and repairs to damage caused by previous trees, she said.

Underground infrastructure, such as electricity cables and water pipes, were also cited as part of the reason for higher charges as they might have to be moved to protect them from roots.

Councillor Heley said that the Green administration had put forward £200,000 for new street trees and offered to meet with residents from Glebe Villas.

Labour councillor Gary Wilkinson also backed Councillor Nemeth. He said: “I think it’s mindful to consider the community groups who have sourced funding to plan trees and now feel they’re being penalised in some way.

“We should protect the funding they have provided up until now.”