‘Sisters Are Doin’ It for Themselves’ – Brighton gig report 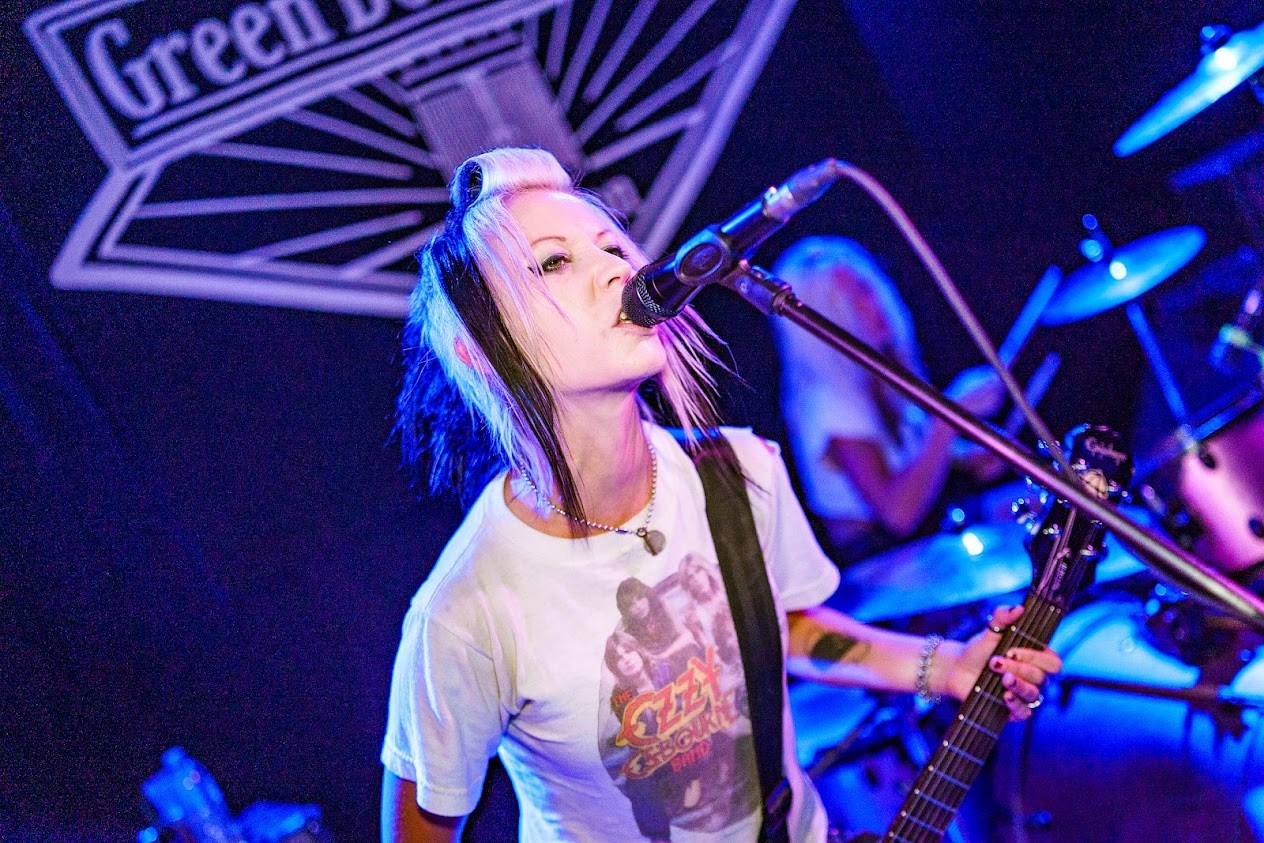 It was always going to be a raucous post-lockdown night in Brighton at the Green Door Store (located below Brighton’s Main Railway Station) as Hastings finest sisters of punk rock Maid Of Ace had planned a veritable evening of speed music with serious pogoing and they were going to be taking the venue by storm!

So let’s see what occurred………… 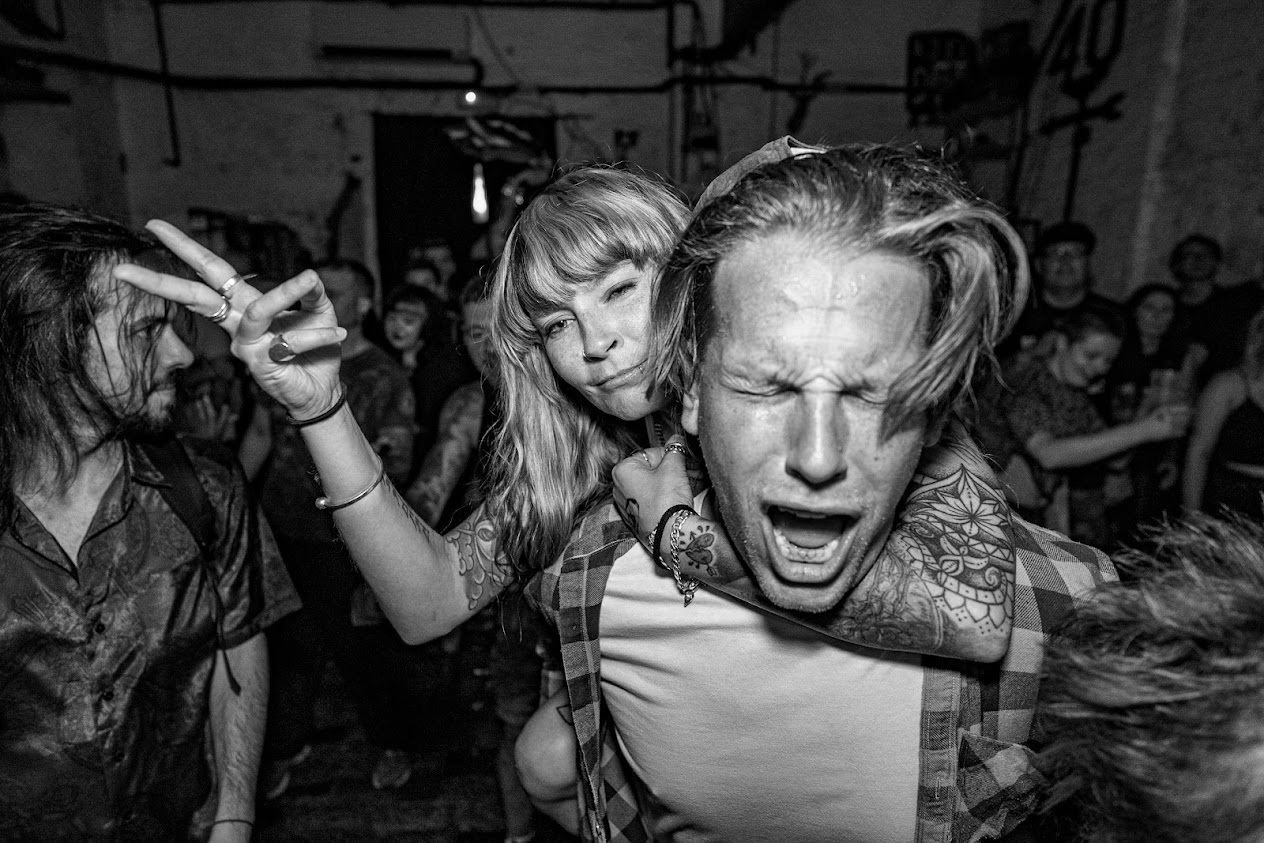 We made our way to the venue with our facemasks and Lateral Flow Test results in hand just in case we needed them, but on arrival we immediately noted that almost everyone was mask free and so we joined them. This was exactly the same occurrence the night before at the Frank Carter Brighton gig – Read our review HERE.

The Maid Of Ace crowd were a mixed bunch, ranging from traditional old time ‘been there seen it done it’ punks to young riot grrrls. It was a pleasant hot evening and a majority were stationed outside the venue with their liquid refreshments of choice in hand. The atmosphere was buzzing! Folks hadn’t seen each other for many a day and much banter was being had by all. Let’s face it, there’s tons to catch up on over the past 16 months. Anticipation was high, but you had the feeling that a majority were just grateful to be out again at an actual live gig that wasn’t socially distanced.

Support was to have come from the intriguingly named Dee Skusting & The Rodents, but sadly I guess that being based in the USA, that they couldn’t get across due to covid. 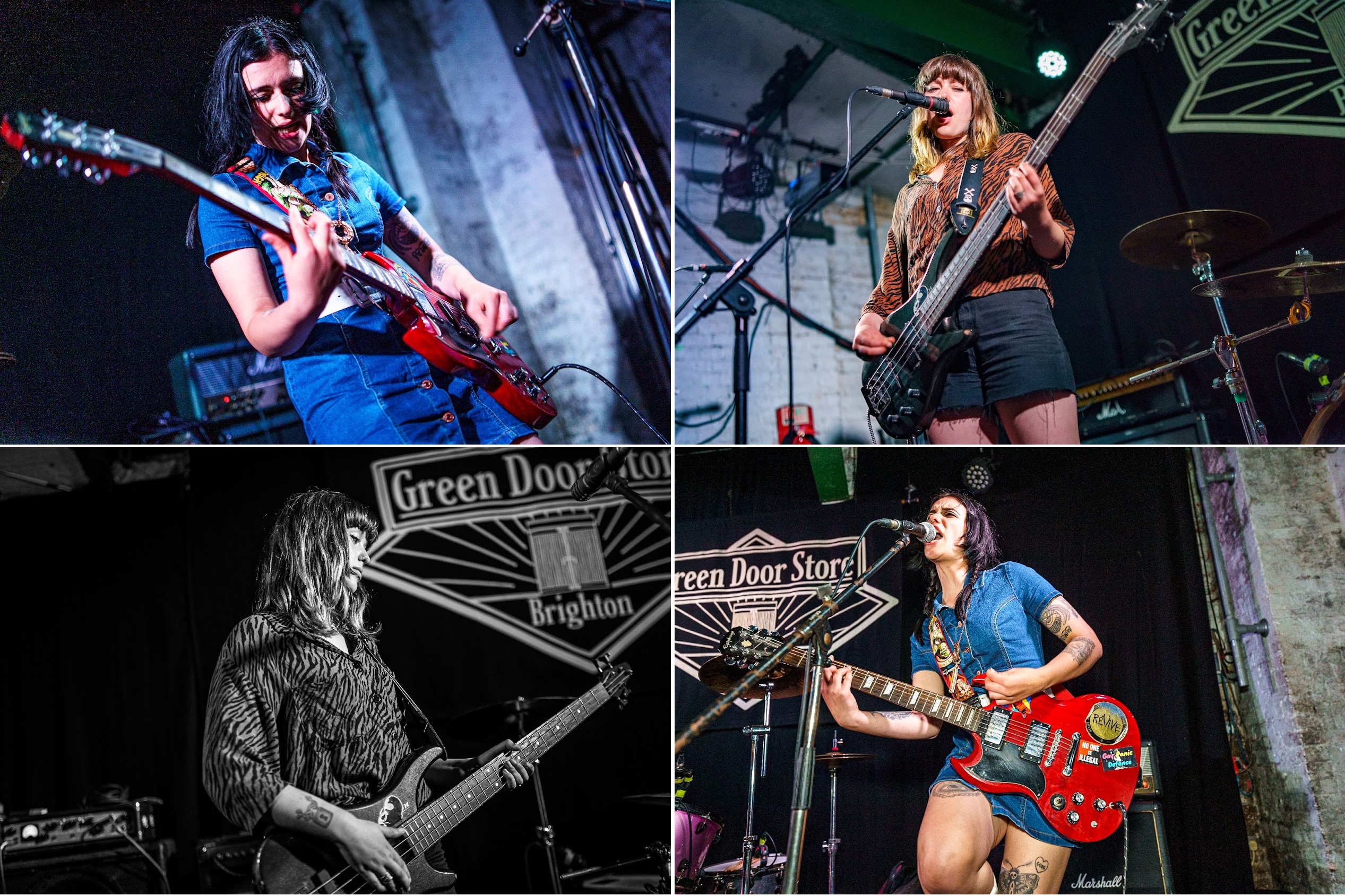 New support came in the form of Bratakus who are a two piece Vegan, Riot Grrrl Punk band from the North of Scotland. They are sisters Onnagh Cuinn (bass/vocals), Breagha Cuinn (guitar/vocals) and a drum machine. They have been described as making ‘distortion-driven break-neck riot grrrl sounds’.

The Cuinn sisters took to the stage – which I do believe has been carpeted since I was last there – and the eager punters filled the cobblestoned flooring with their presence. Onnagh plugged her phone into a lead on the floor which allowed the selected drum (machine) tracks to be played and they were off. 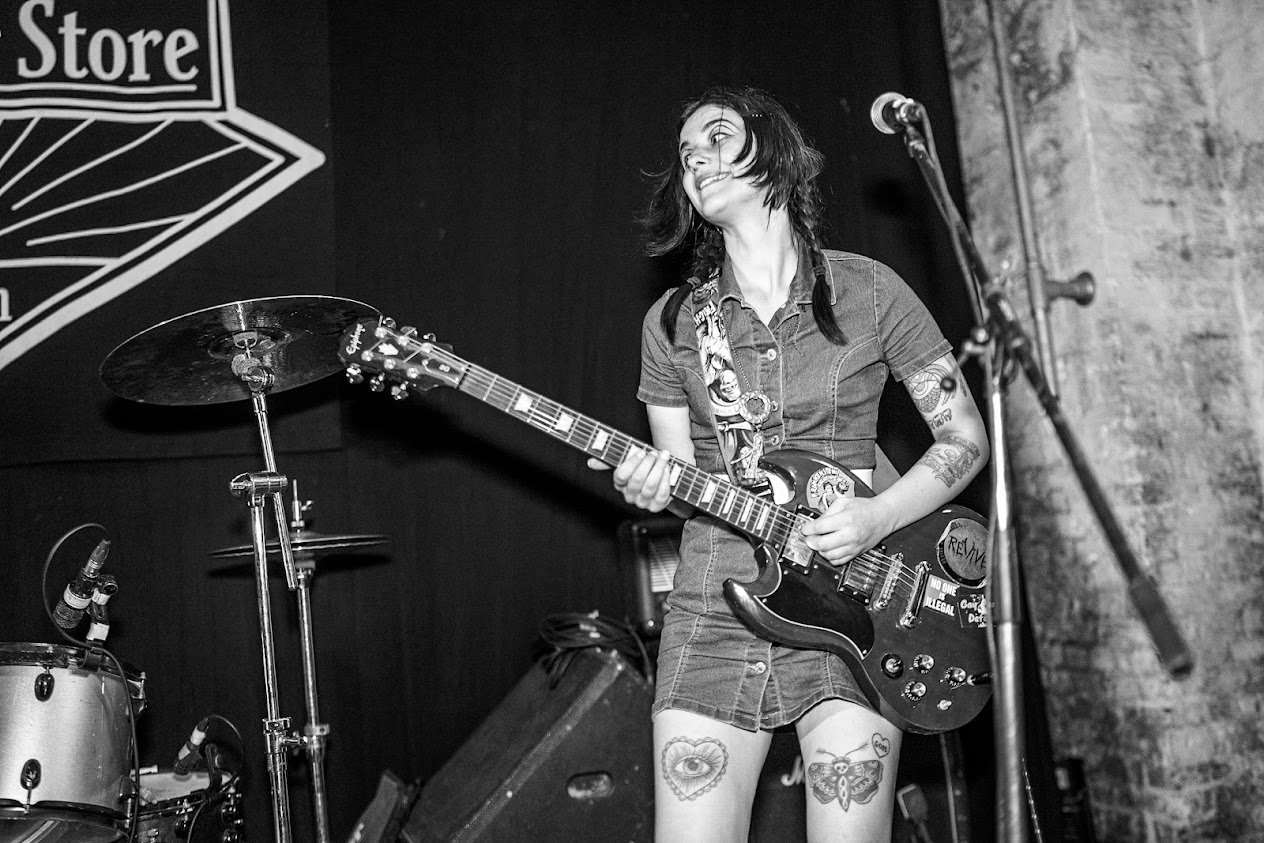 Breagha who is around five years the senior of her sister was on stage left (our right) introduced their first number ‘The Half Woman’ and it immediately became apparent that they are into spooky horror films and also that she was overjoyed to be performing live in front of a crowd. I initially noticed that the drums weren’t as loud as a real live drummer, but after about 30 seconds I got into the groove.

Breagha told us that many in the past have been surprised with her vocal delivery and commented how on earth a girl such as herself was capable of such guttural sounds. I got what she was saying, but us Brighton gig goers have hopefully seen past stereotypes many years ago! Mind you, if punks were played an instrumental section of part of a Maid Of Ace track without seeing the band, they might mistakenly assume that they were listening to a quartet of burly six foot geezers from Hull or Middlesbrough.

Meanwhile, the Bratakus tunes kept coming fast and furious including their latest single ‘Real Men Eat Meat’ which retorts “Pushing the message that killing makes you a man, is all part of their plan”. One soon realises that here is a band that feels strongly about their beliefs and what is the right thing to do. Like being respectful at gigs, the theme of their fourth track this evening, ‘Behave’, which was for me their standout of the nine tracks. Onnagh’s bass-work on this was excellent and there was an underlying Sigue Sigue Sputnik backbeat going on. 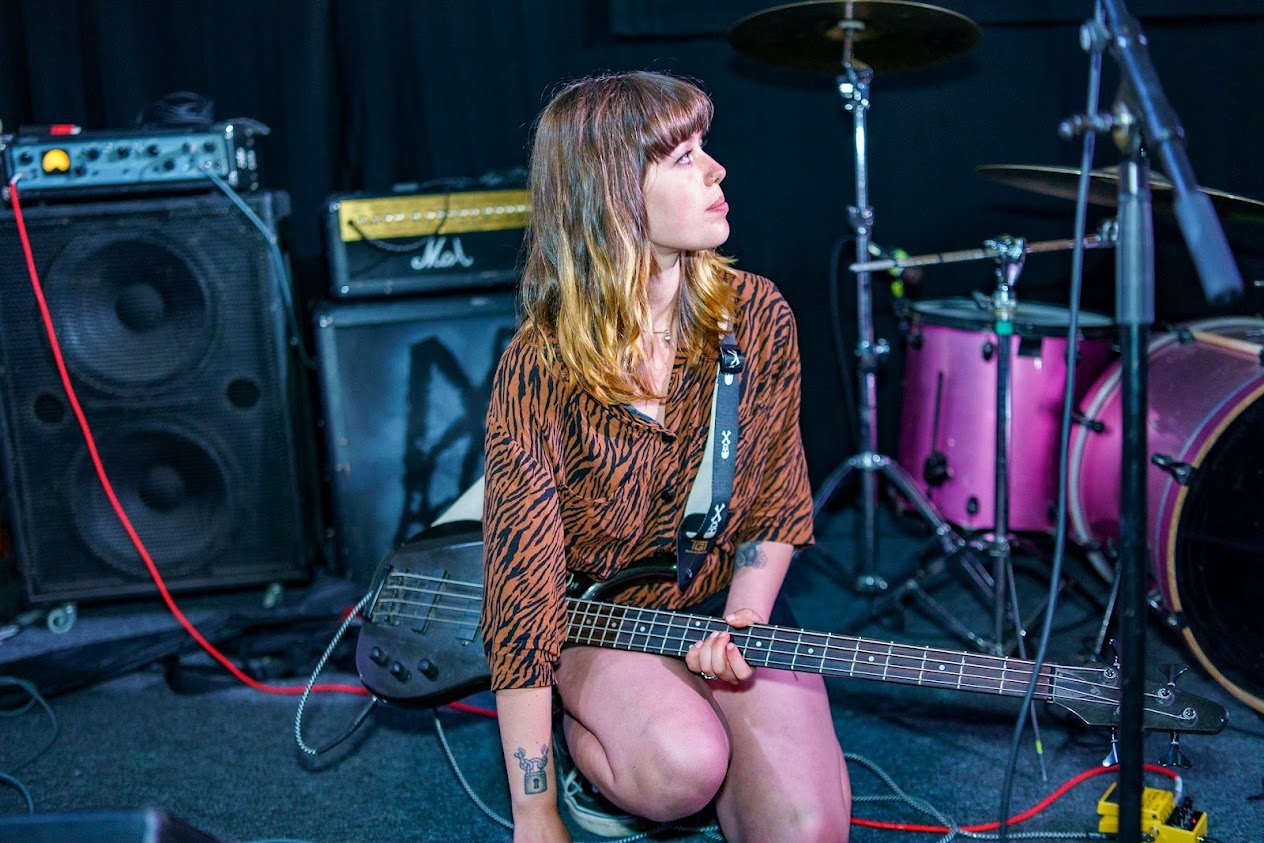 They had a go at ‘Hypocritical’ which Breagha informed us that they had only ever played it once before! You’d never have guessed. So overall a great set and let’s hope that they return to Brighton very soon! (Hint! Hint!). 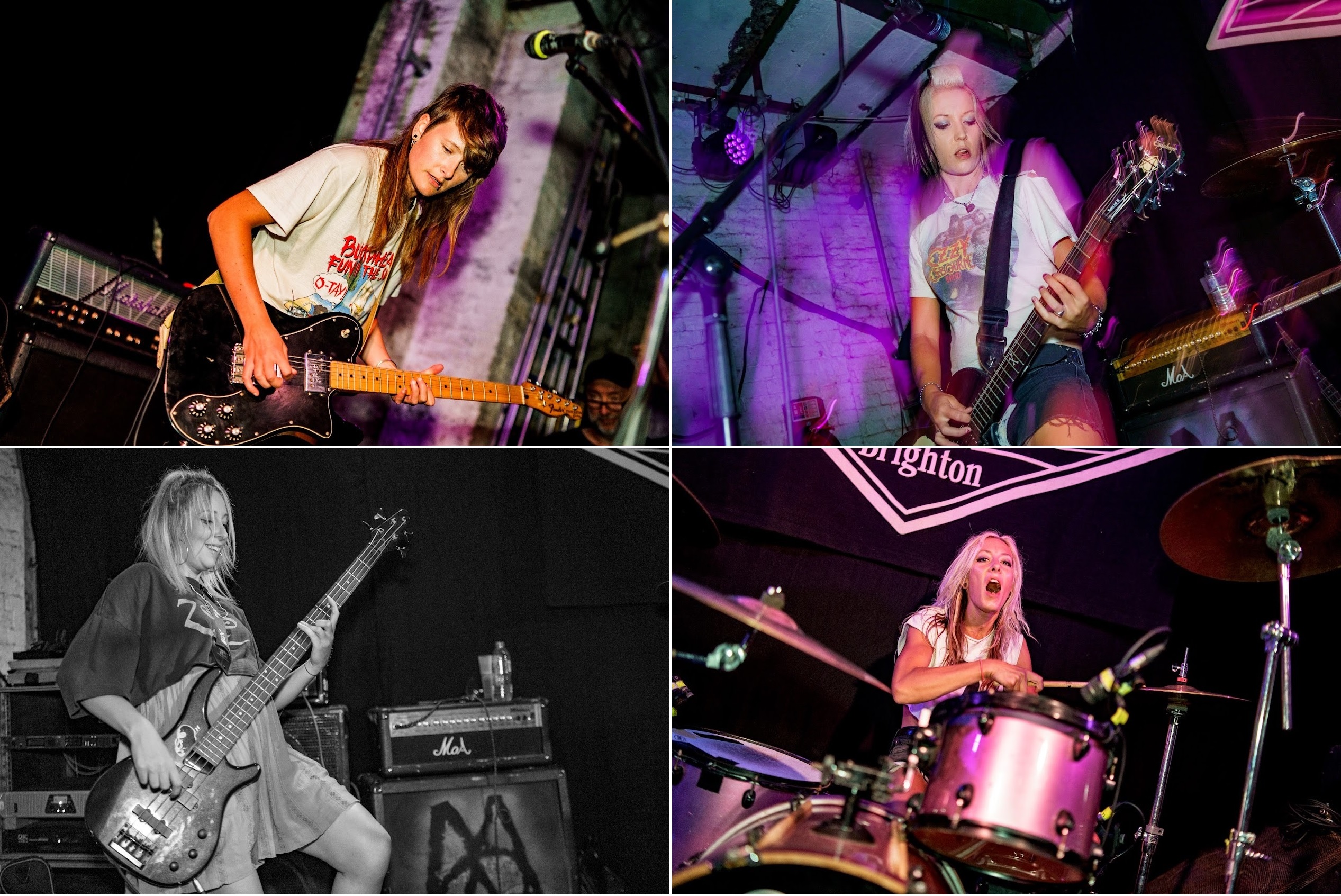 Headliners Maid Of Ace have been purveyors of adrenaline fuelled punk since 2005. They are comprised of Alison Cara Elliott (lead vocals/guitar), Anna Coral Elliott (lead guitar/vocals), Amy Catherine Elliott (bass/vocals) and Abby Charlotte Elliott (drums). I guess their parents only got as far as ‘C’ in the ‘Baby Names For Girls’ book then!

The girls released their debut self-titled album back in 2014. That was followed by the cleverly titled ‘Maid In England’ in 2016 and their latest long player ‘Live Fast Or Die’ was launched on 27th August last year.

Maid Of Ace and the aforementioned Dee Skusting & The Rodents have recently shared a 7” single as part of issue number nine of Safety Pin Magazine, which also includes interviews with Chris Mundie of The Business, The Lovely Eggs, Rabies Babies, The Dinz, Rage DC, Lucy & The Rats and Deathtraps. 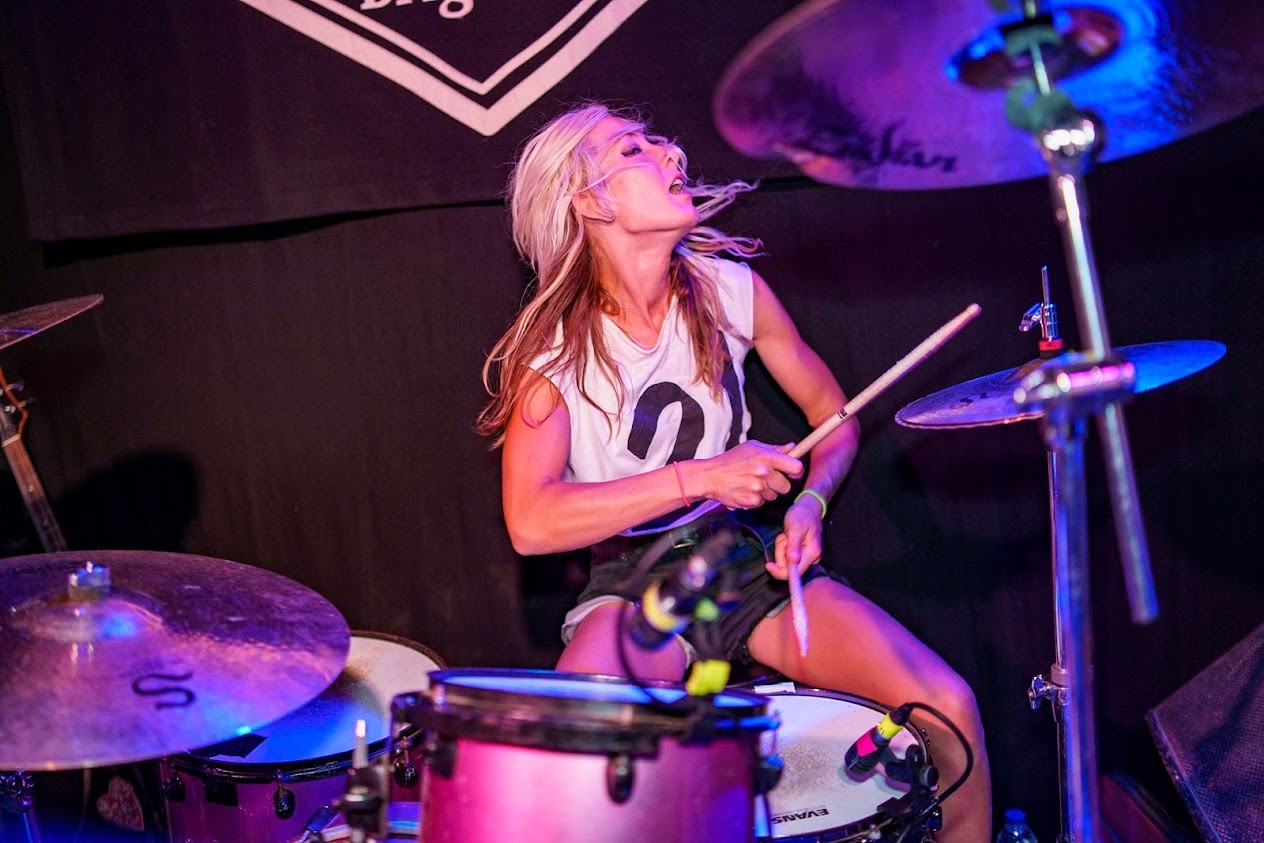 The siblings are best known for their live energy performances, filled with raw sound and straight-to-the-point Punk Rock and tonight that’s exactly what we got! Seventeen chunks of no nonsense 1-2-3-4 punk. In fact, one could even argue that they occasionally hit the border with metal at times because of the amount of sheer power that they unleash in our faces. 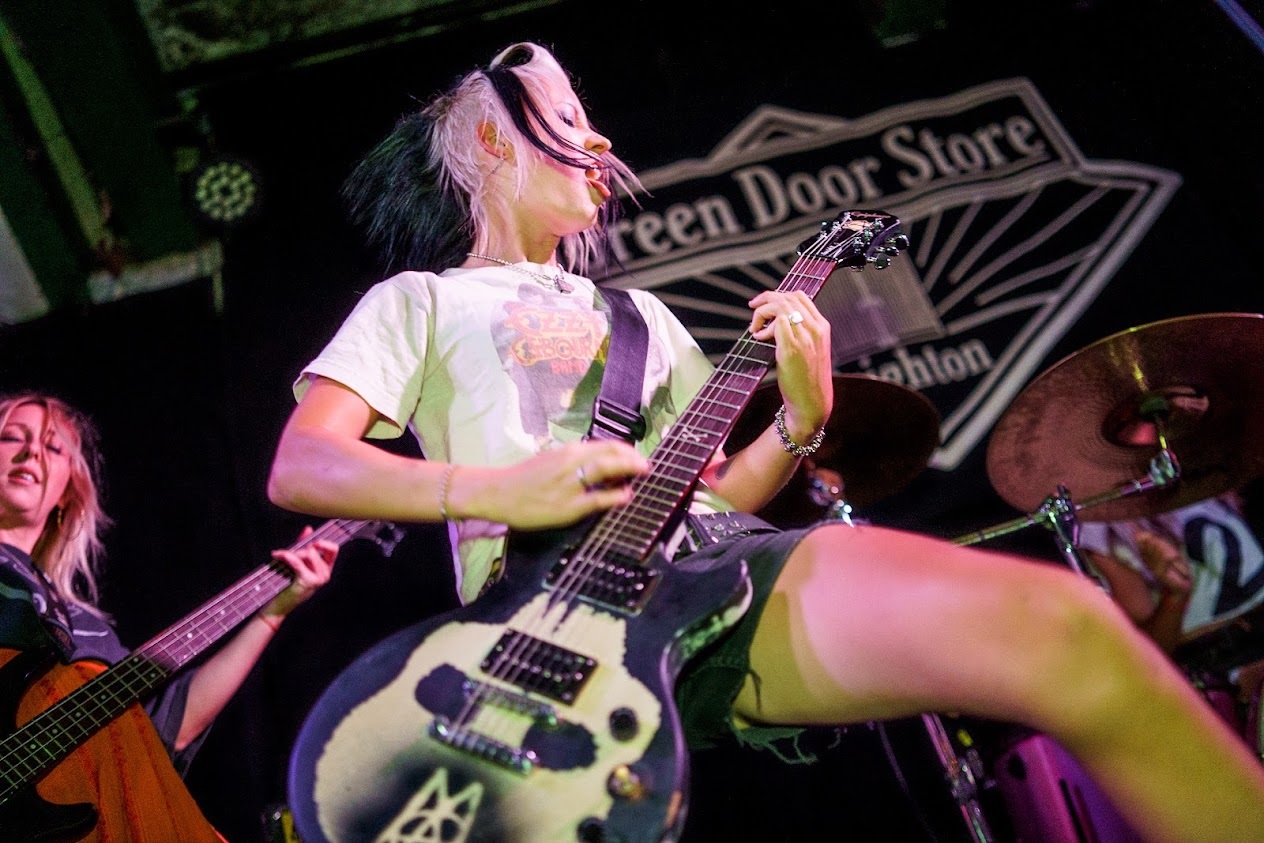 Lead vocalist Alison whips the crowd up from the very off and there is only one brief interlude, which is around track three, ‘Stay Away’, as mum-to-be Amy’s bass guitar gives up the ghost and Onnagh from Bratakus wades in with the loan of hers.

We were stationed right at the very front and I found myself switching my gaze from watching one member to another on a regular basis. But I have to seriously flag up Abby’s drumming, which was holding my admiration and the band tightly together. She was going hell for leather and her blond flowing locks reflected this. And she was playing barefoot as was her sister Amy on bass.

Anna’s energetic guitar playing was complimenting her sister’s drumming and I could imagine the two of them just doing an instrumental break in a tune, but maybe that’s too mid 1970’s rock for them? They are more Motörhead than that.

I kept thinking to myself “God these are good”! Every song was a tightly packed offering of raw seaside punk. These are a deffo “Would like to see live again band”. 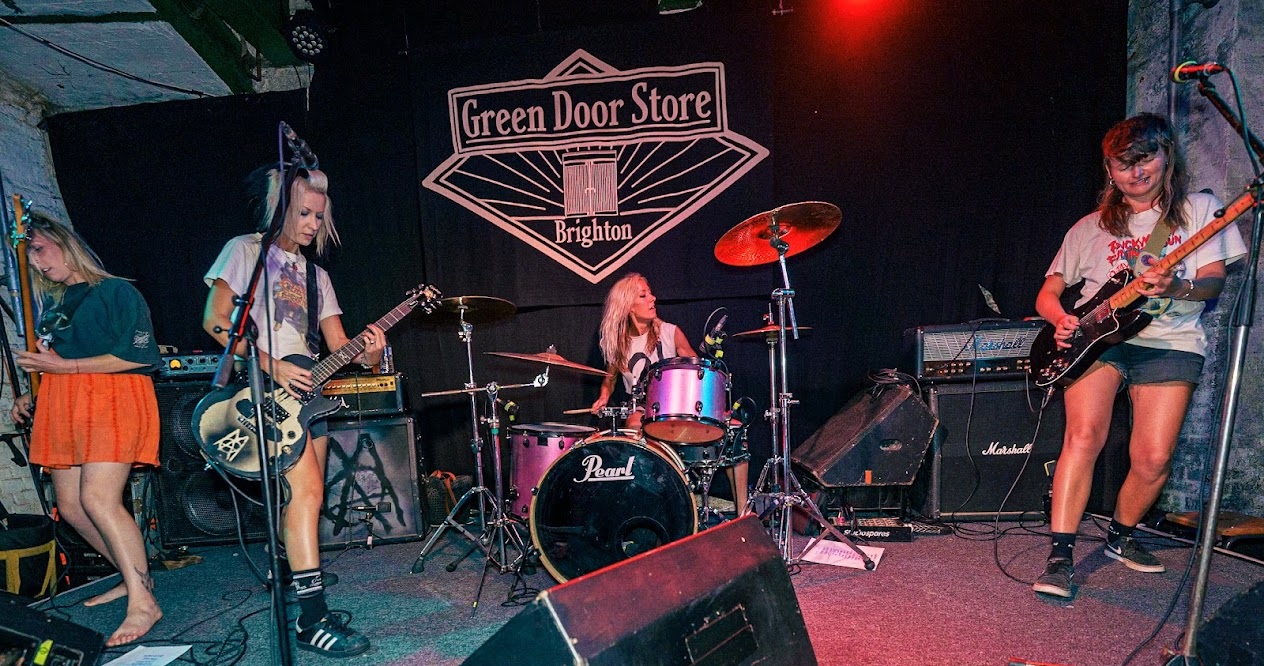 Grab your Maid Of Ace albums and merch HERE and also on their Bandcamp page HERE.

Want more reading?
The Brighton & Hove News Music Team have had the pleasure of witnessing Maid Of Ace live on two occasions. The last time was at the CHALK venue on 2nd February 2020 – Read our report HERE. Prior to that was at The Prince Albert on 26th July 2017 – Check out what we had to say about that night HERE. 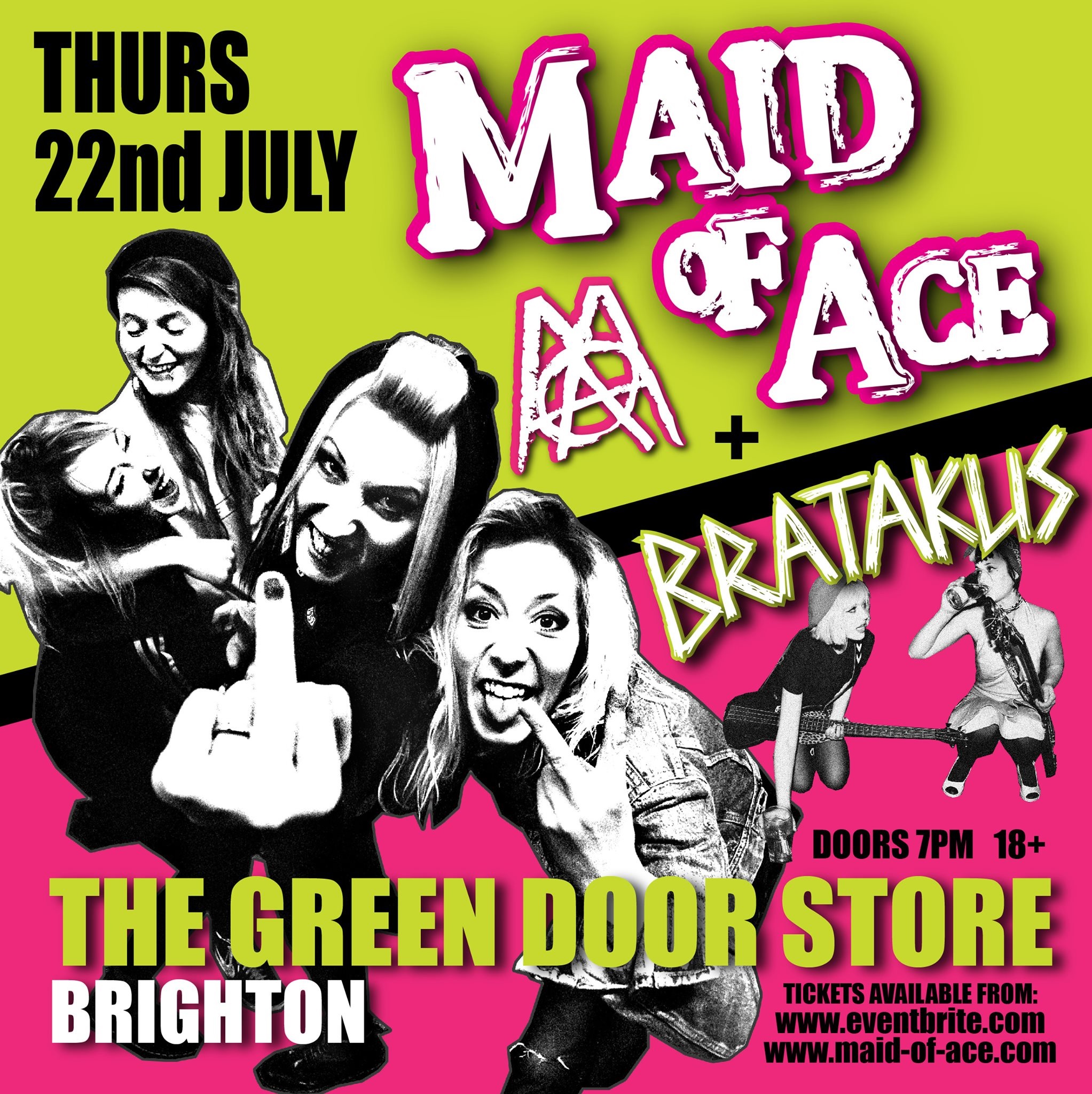