Signs of opposition appear to proposed parking changes in Brighton

Opposition is brewing to proposals to split the zone J parking area on the edge of the centre of Brighton.

Brighton and Hove City Council has proposed splitting the zone along the railway line near London Road station, with a public consultation now under way.

The proposed split would mean that residents in the Ditchling Rise and Upper Lewes Road area and those in the streets between Springfield Road and Stanford Avenue were in different zones.

People living in the Ditchling Rise area and Fiveways shared their concerns on social media after the consultation started on Monday (26 July).

Those south of the railway line were worried about losing the right to park in the streets north of the line if the zone is split, especially those who work unsocial hours.

Those who work late shifts or nights rely on being able to park a few streets to the north where there are more often spaces to be found.

Graham Davey said: “I can’t see how splitting the zone would solve any parking problems. It looks as though it would make parking on the Ditchling Rise side of the zone even more tricky.

“Living in Ditchling Rise, I also like the opportunity of parking up near Fiveways or down by Preston Park – that would be lost with this plan.”

Jamie Brough, from Warleigh Road, said that he hoped that the zone would not be split and would like to see double yellow lines on each corner shortened by half a car.

He said: “I often return home after 10pm and spaces are very sparse especially since more people are working remotely.

“I often have to park on double yellow lines. On one occasion I got ticketed at 8.30pm and then again around 8am in the morning.

“In the 12 years I have lived in Warleigh Road, I have maybe received three tickets, so two in around 12 hours was a bit of a shock during lockdown.”

Haydn Stride, who also lives in Warleigh Road, said that the proposed changes would restrict where people could go.

He said: “What we have at present isn’t the best at all times, but we share with a wider community, as do they with us.” 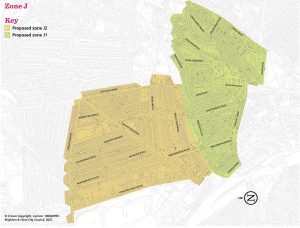 The zone review comes after a petition, signed by 328 people, was presented to the council’s Environment, Transport and Sustainability Committee in June 2018.

It called on the council to make zone J work for people south of the railway and said that residents living from Viaduct Road to Ditchling Rise were struggling to park in the area in the evening.

The petition, started by Philip Wells, the pastor at the Calvary Church, in Viaduct Road, said that zone J was too large, and enabled people from further out to park closer to the centre of Brighton.

It said: “When we voted for this CPZ (controlled parking zone), we thought it was just for us residents.

“We were never told that other people from other neighbourhoods were also going to be able to park here in future and we have never been consulted on this matter.”

The council said that letters were sent to all addresses within the zone J area about the consultation which is on the council website and closes on Monday 6 September.