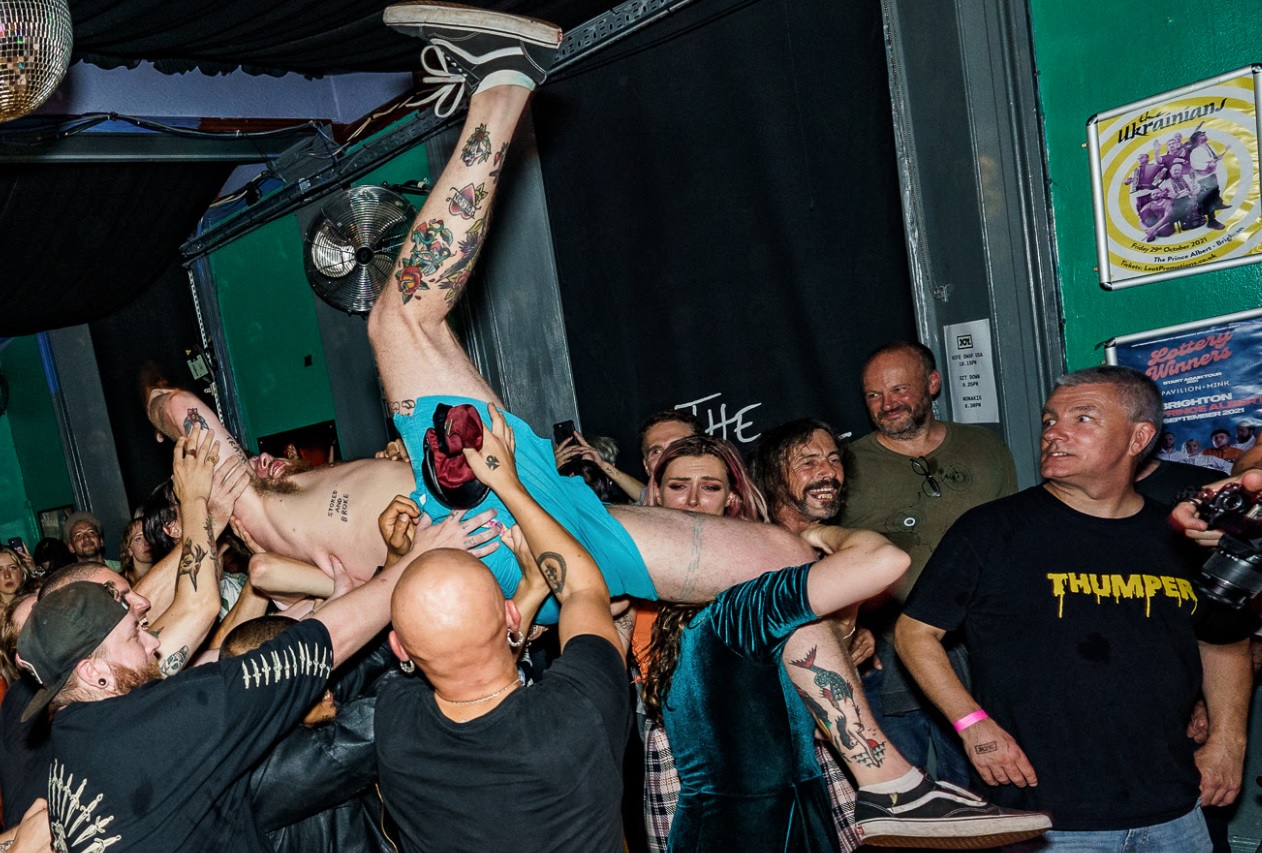 Let’s start with……
“Things you never hear the punters say after a Wife Swap USA gig!” : No.1 “Well that was a tightly organised set played in perfect harmony by a smartly dressed outfit!”.

And here highlights the chaos and anarchy of a bunch of half a dozen young generation musicians who have gravitated to Brighton via places like Staines, or as it has been poshly known since 20th May 2012 as Staines-upon-Thames. 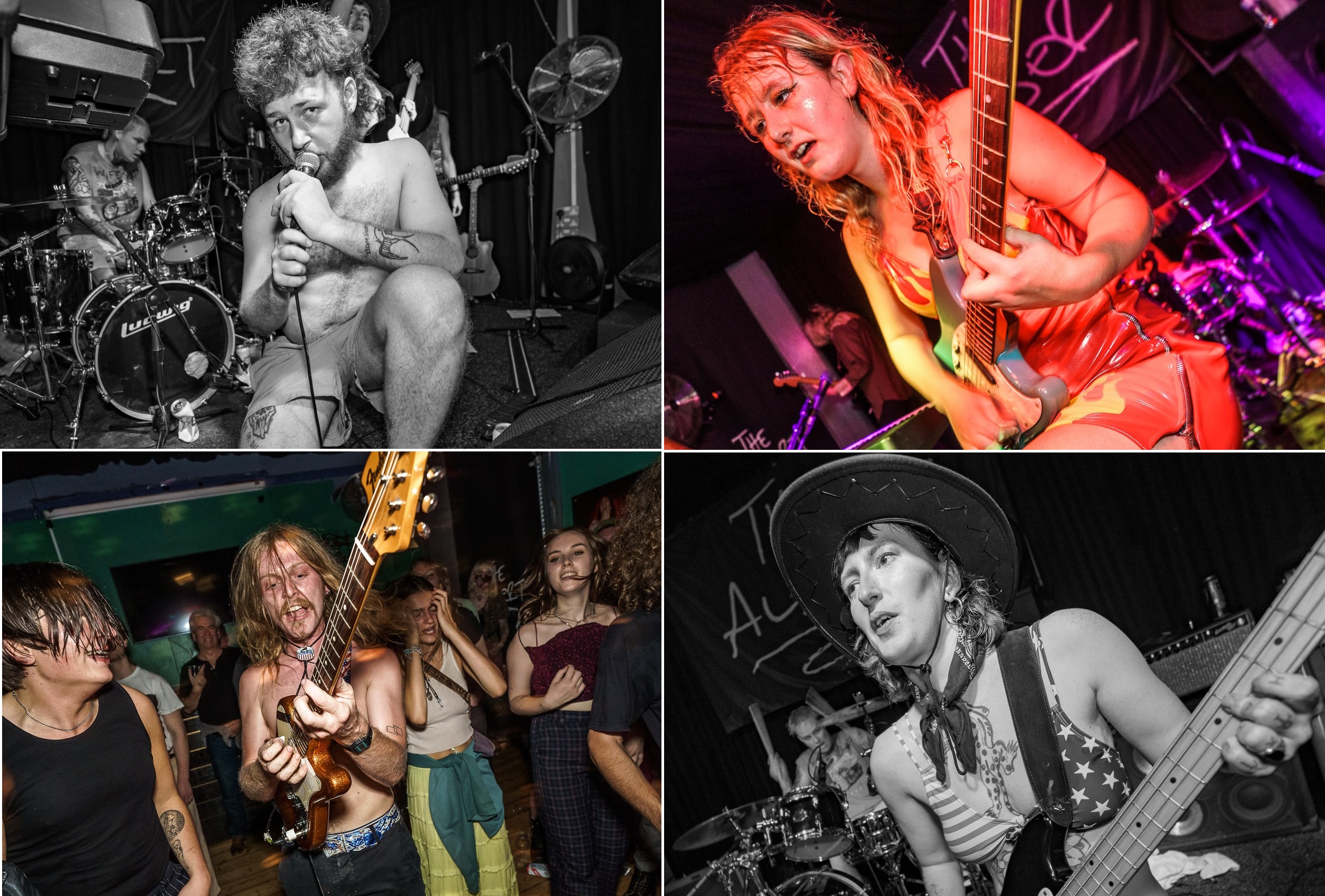 We at the Brighton & Hove News Music Team are certainly no strangers to Brighton’s most exciting sextet Wife Swap USA having witnessed their first ever gig on 6th December 2019 (review HERE) and several times since.

There’s always shenanigans of the highest order on offer during a WSU gig and this evening is no exception. The vastly differently dressed unit consists of Harry Saunders (vocals), Matt O’Riley (rhythm guitar/keys), Kim Gardiner (bass), Jane Rivers (lead guitar) and Phoebe Lunny (keys/guitar), and Catt Jack (drums), who are both also in the outrageous Brighton trio the Lambrini Girls. 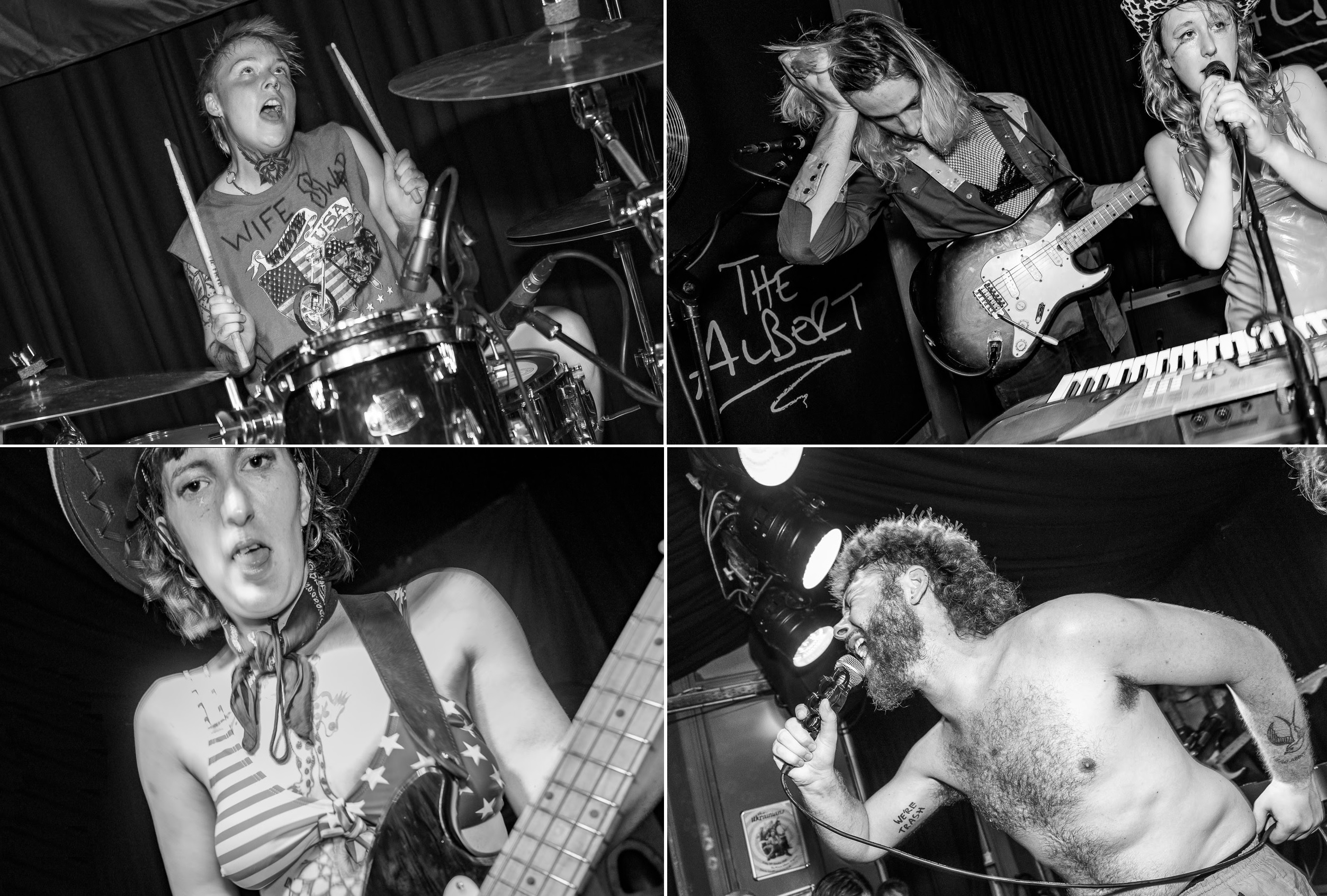 If you are rather partial to fast punk and love IDLES, Fontaines DC, and THUMPER, then Wife Swap USA are most certainly for you.

We were served 12 contrasting numbers this evening. Harry as usual was stripped down to his shorts, ‘cowboy’ Matt became topless too and returning to the fold Kim (who missed their last gig) was sporting a Yankie swimsuit, whereas keyboardist Phoebe was “accidentally” flashing her black knickers! 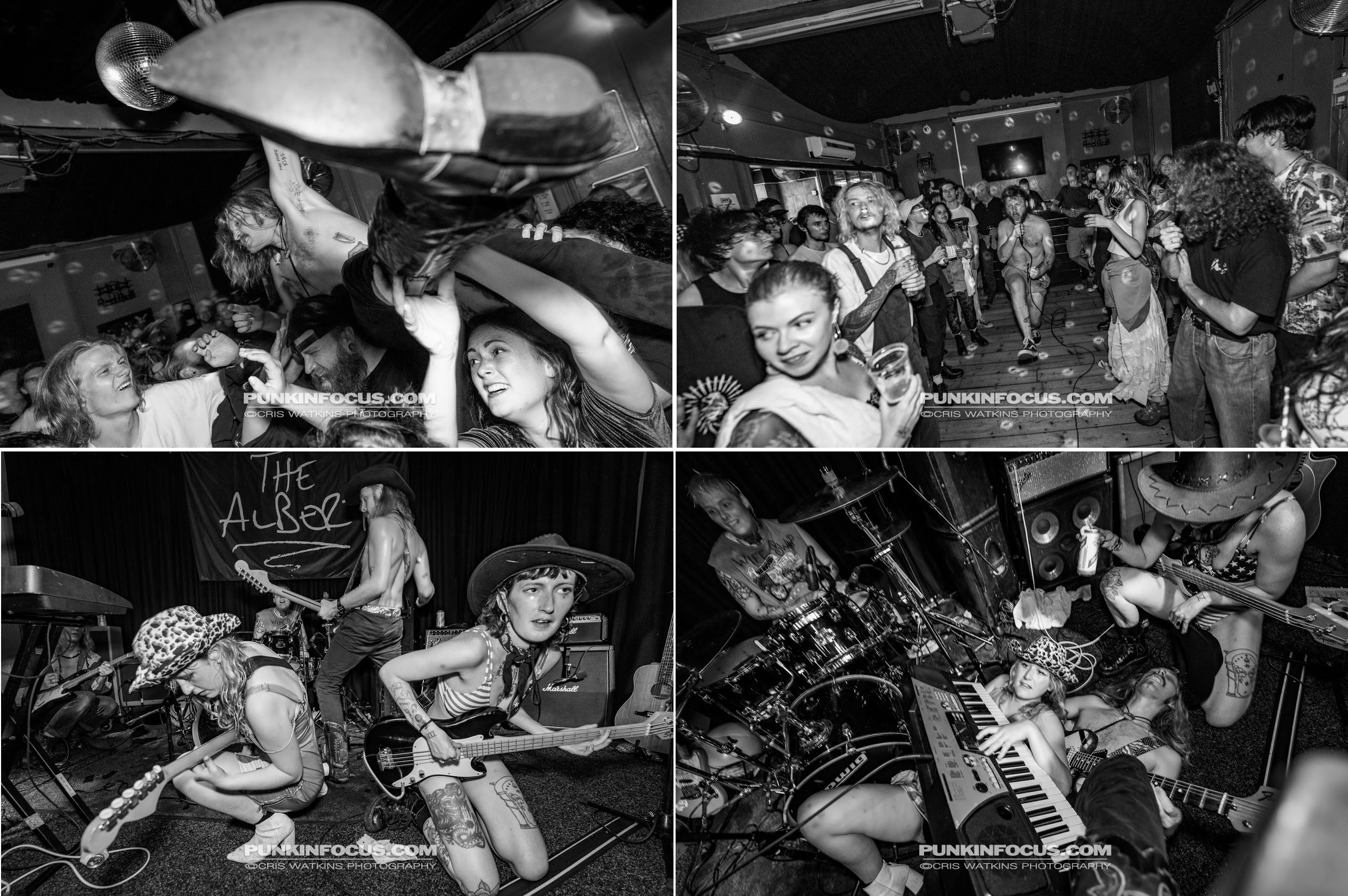 The rowdy rabble took to the stage (as tonight’s headliners) minus Harry, and ‘cowboy’ Matt took the initiative and sang a solo cover version of Colter Wall’s ‘Thirteen Silver Dollars’. This went down well when Harry arrived and they played about 30 seconds of Steps ‘5,6,7,8’, which was 30 seconds too long for me! Chart fodder! The sextet then started properly and launched into ‘Bad Day To Be A Beer’. This was swiftly followed by the rockin’ ‘Sniffin’ USA’ and ‘I Love The Pub’. They were now in full energy mode! 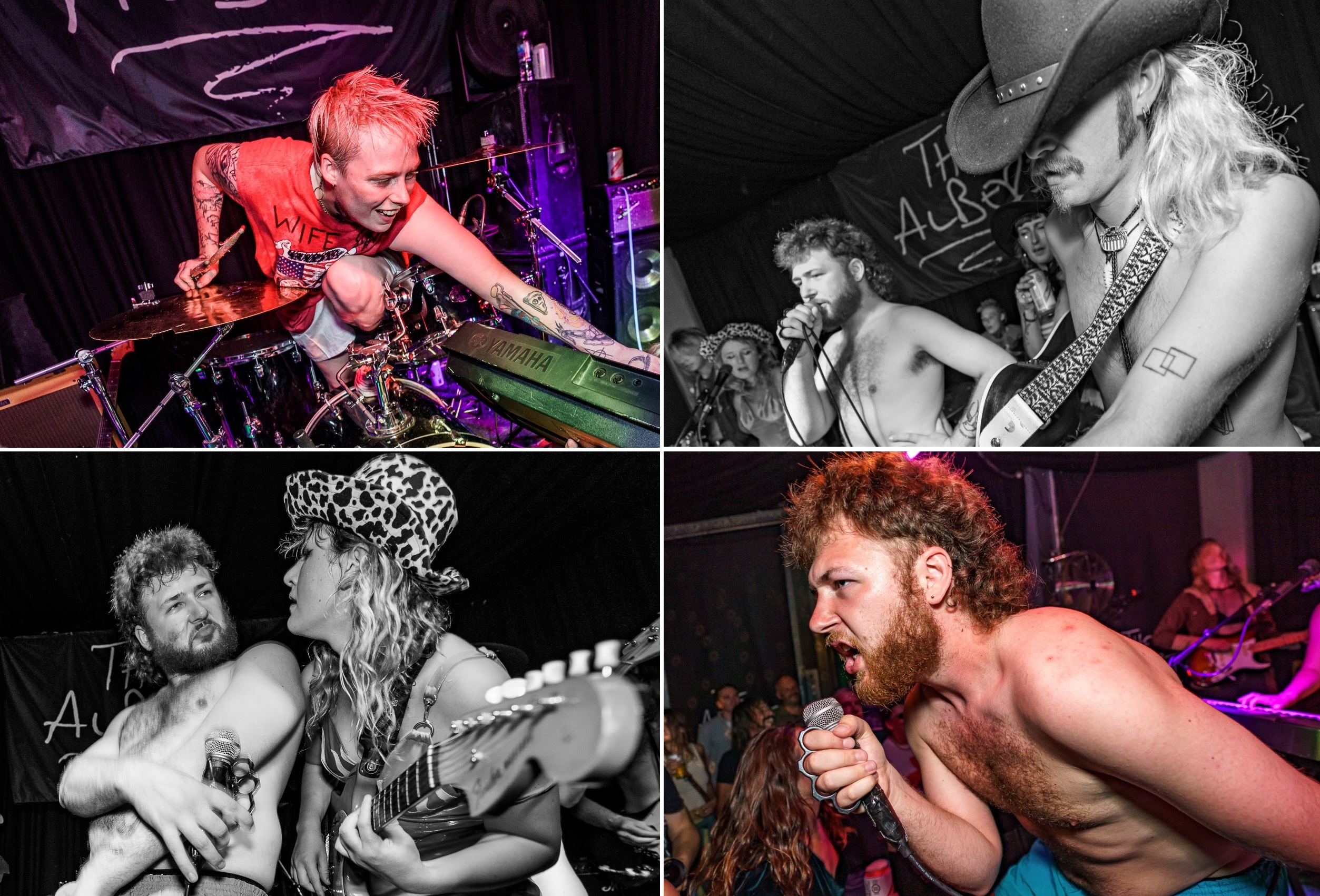 Harry joined the crowd on several occasions and was paraded above them a couple of times. Matt went for a stroll once and drummer Catt went for a stage dive. It was great to bridge the gap between band and punter. They love getting up close and personal with their friends and punters, who in turn thrived on it. The atmosphere was pure joy and everyone present was having a real post-covid ball. It was mayhem and madness all the way through their set. I guess the band members feed off of the unpredictability of it all.

The surprise of the evening was however that The Prince Albert lights were NOT stuck on red all night! Did they read my last review? This time, the eight spots were from left to right: green, pink, yellow, red, red, yellow, pink, green! Success! 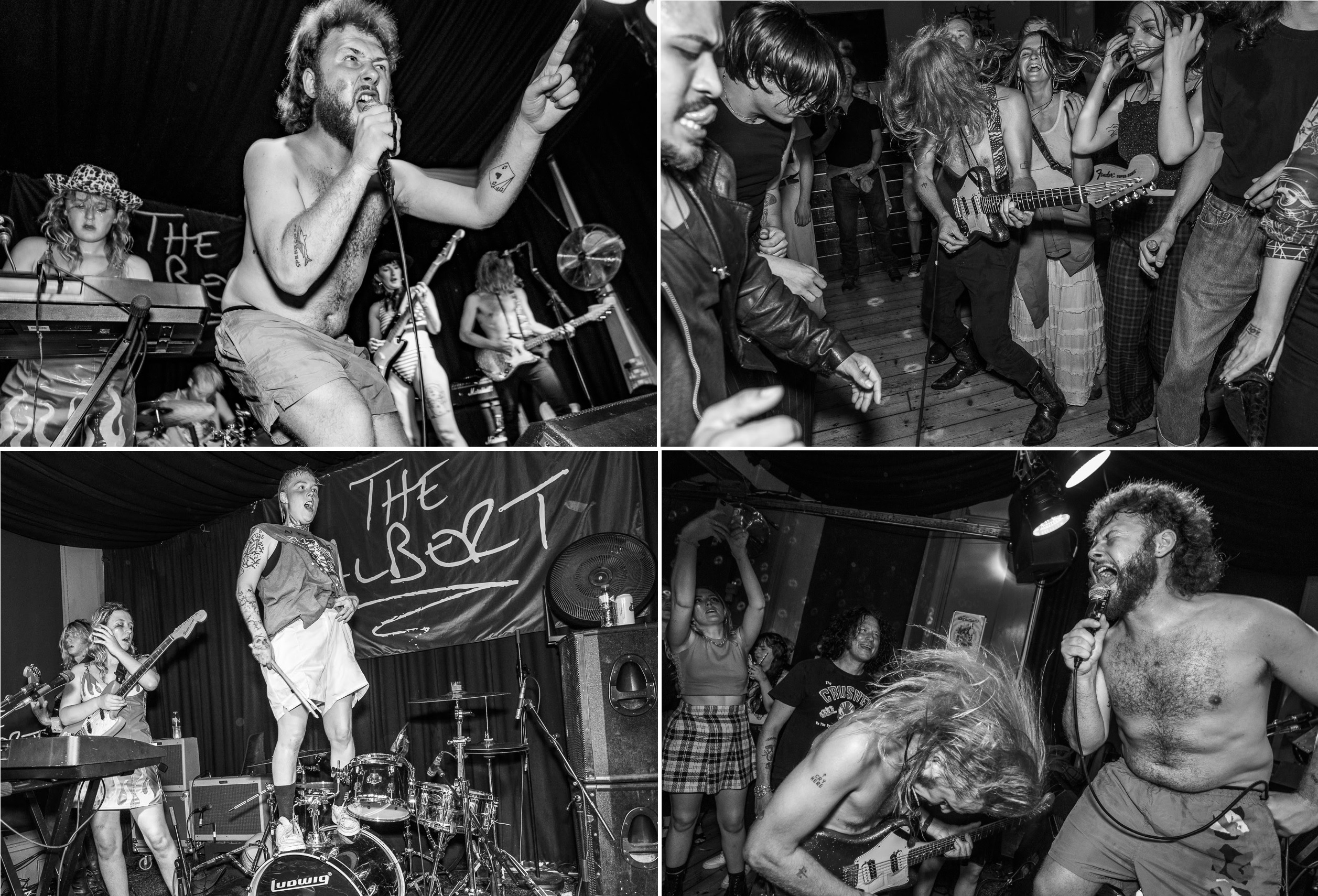 Wife Swap USA setlist:
‘Thirteen Silver Dollars’ “Cowboy Matt solo” (Colter Wall cover version)
‘Bad Day To Be A Beer’
‘Sniffin’ USA’
‘I Love The Pub’
‘Snowstorm’
‘You’ve Been At The Bins’
‘The Jazz And Poetry One’
‘I Wanna Play In A Punk Rock Band’
‘I Lost My Virginity’
‘Too Sad To W*nk’
‘Lipstick’
‘I Don’t Wanna Work In A Bar Anymore’ 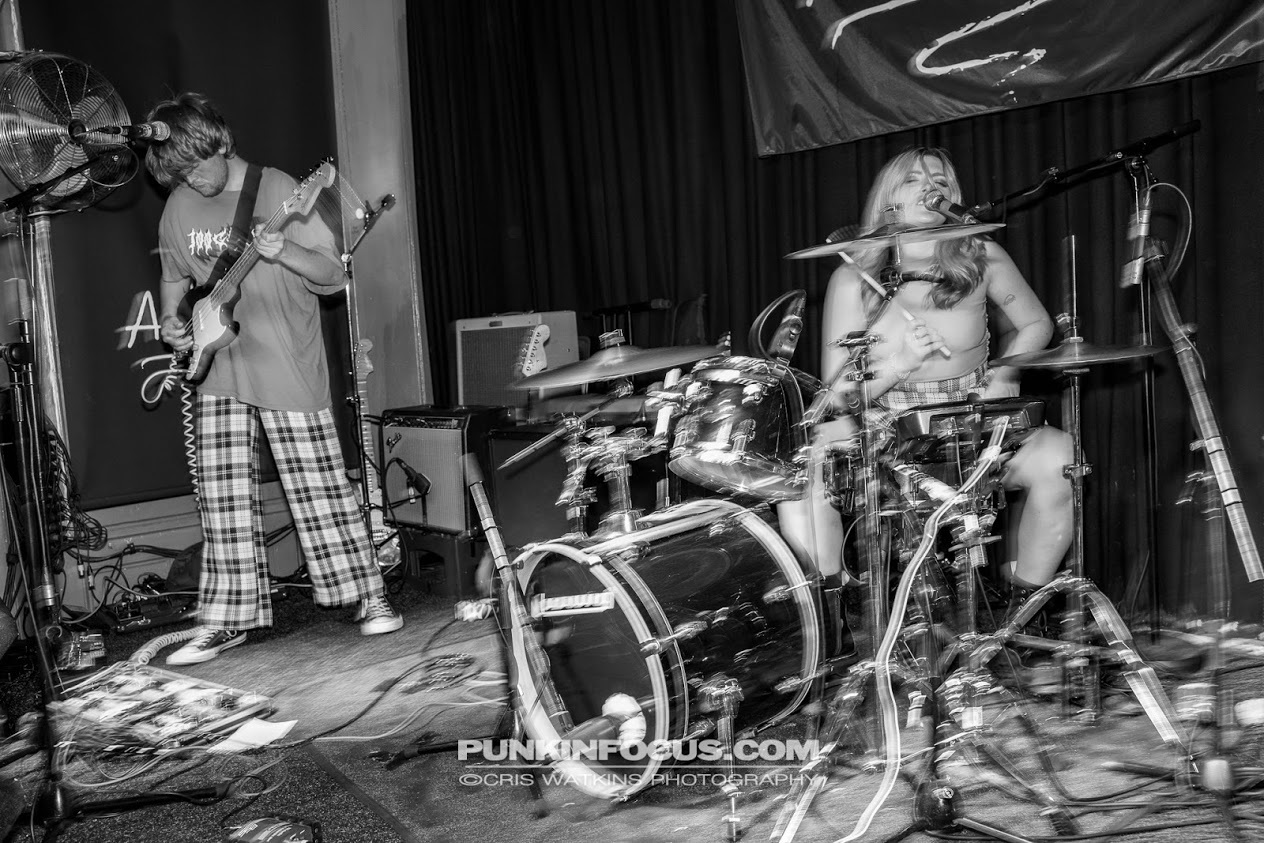 Brighton based Sit Down refer to themselves as “Apocalyptic art rock” and “hell’s house band”. Up until this evening they consisted of duo Greg Burns on vocals and guitar and Katie Oldham on vocals and drums.

They formed in 2016 after temporarily living in New York City and have been seriously honing in on their exciting sounds ever since.

Their live shows have always summoned up fiery garage rock with infectious energy and acid-tongued wit. Sit Down forge their own brand of art rock that borders on doom, hip hop, and everything in between. 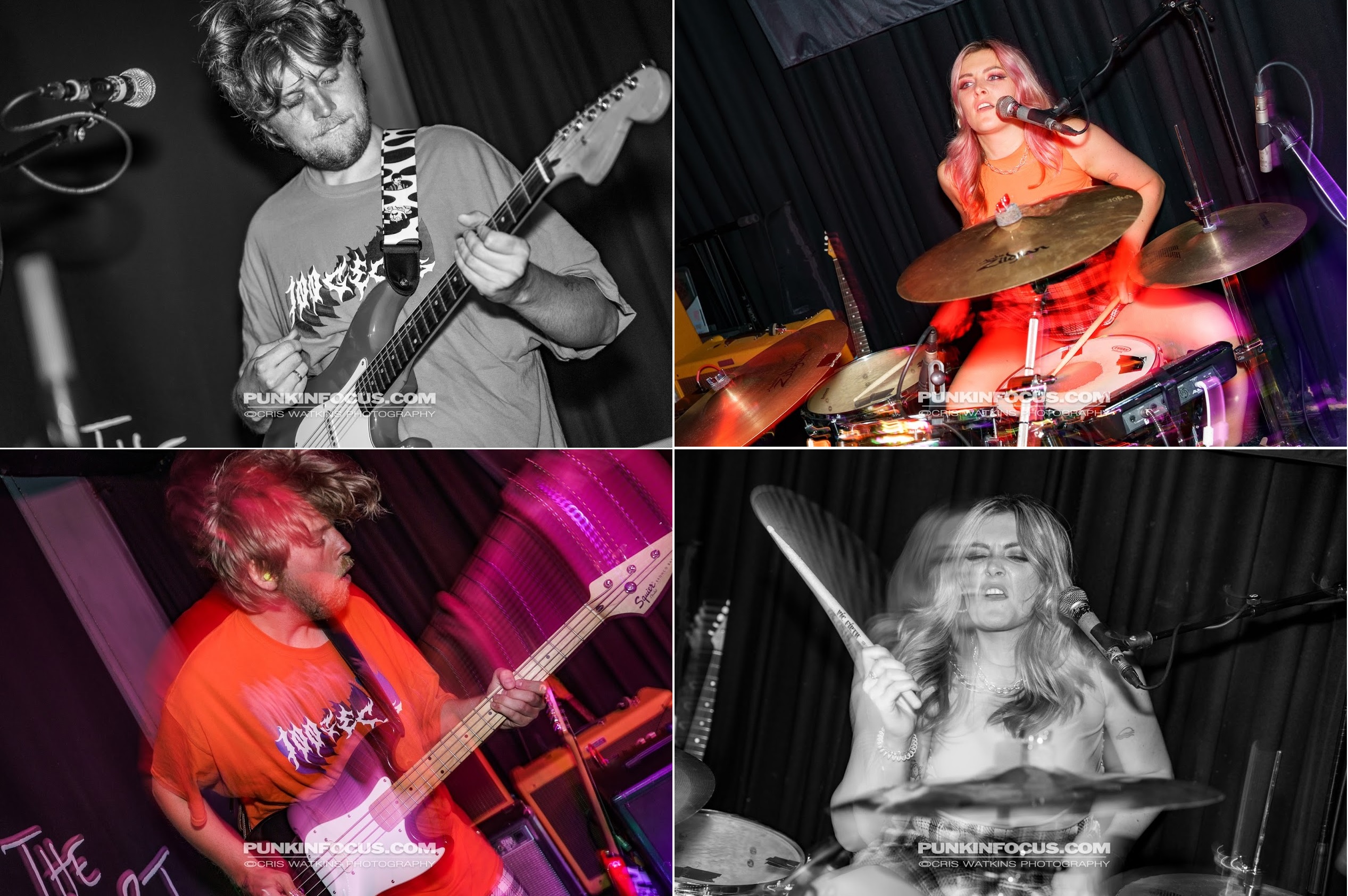 Since their live debut in early 2017, they have refined a signature electrifying sound, with elaborate stage shows and homemade outfits. This is something that their avid audiences have grown to eagerly anticipate. 2018 saw the duo go from strength to strength, by self- releasing their first EP ‘Cheap Luxe’, and supporting the likes of Drenge and performing at Reading and Leeds Festivals for BBC Introducing.

Their ‘Knives’/‘Take A Seat’ single was released in September 2018, which was followed on 20th March 2020 by the aptly titled track ‘Quarantine’. Then came their ‘Nice One’ four tracker two months later.

They have played 100 live performances with their last show prior to tonight being on 13th February 2020. The Brighton & Hove News Music Team were due to review their performance with Stonefield at CHALK on 17th March 2020, but covid had other ideas.

This evening was a special event for Katie and Greg as they were officially joined mid-set by Lilly Macieira Boşgelmez on bass, who is known for fronting De La Chambre. The idea was to “send off” to the two piece line-up, and move forward with Lilly playing the full set live from now on.

On the announcement, Sit Down posted:
“Bloody loved gettin’ up to no good last night with Wife Swap USA after a long 18 months, kickin it all off with new tunes, fresh threads and the debut of our bass slappin wunderkind Lily. Good god just wait til you hear what we’ve been cookin up”. 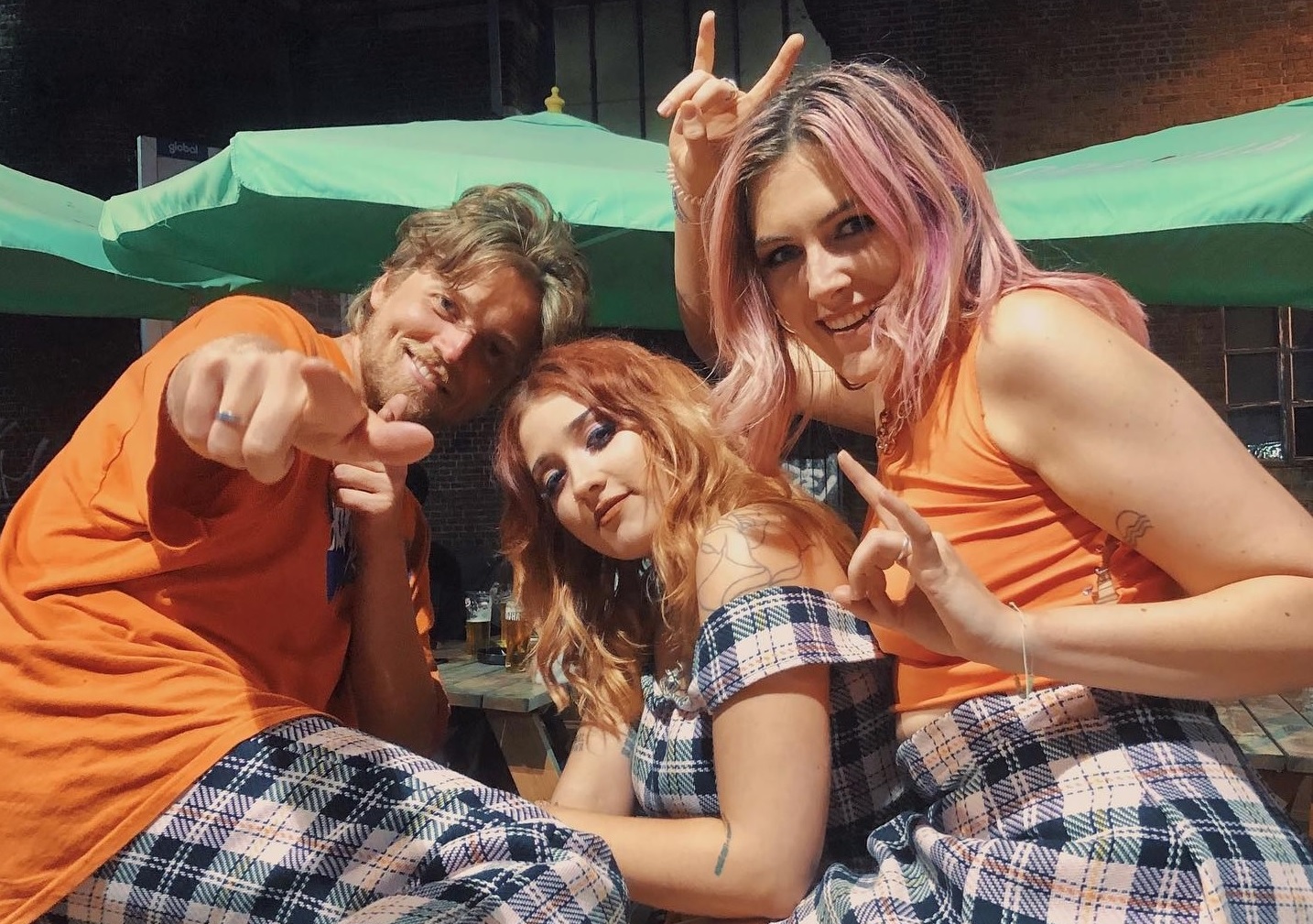 The Sit Down Set consisted of half a dozen tunes which started off with the heavily catchy ‘Bloodlust’ which perfectly highlights the harmony between drums and guitar. This was followed by the drenched-in-sound ‘Mothership’. Both tracks are available on their 2018 ‘Cheap Luxe’ EP, which you can purchase HERE. It also includes the really rockin’ ‘Honeysucker’ which sees Greg and Katie share vocal duties.

The superb bass introed ‘Banana Split’ from their 2020 ‘Nice One’ EP was also given an outing as was the super-fast final number ‘Promiseland’, which is found on the same release. So much noise from a duo! Oh errrr make that trio!!! Looking pretty – Sounding mean! 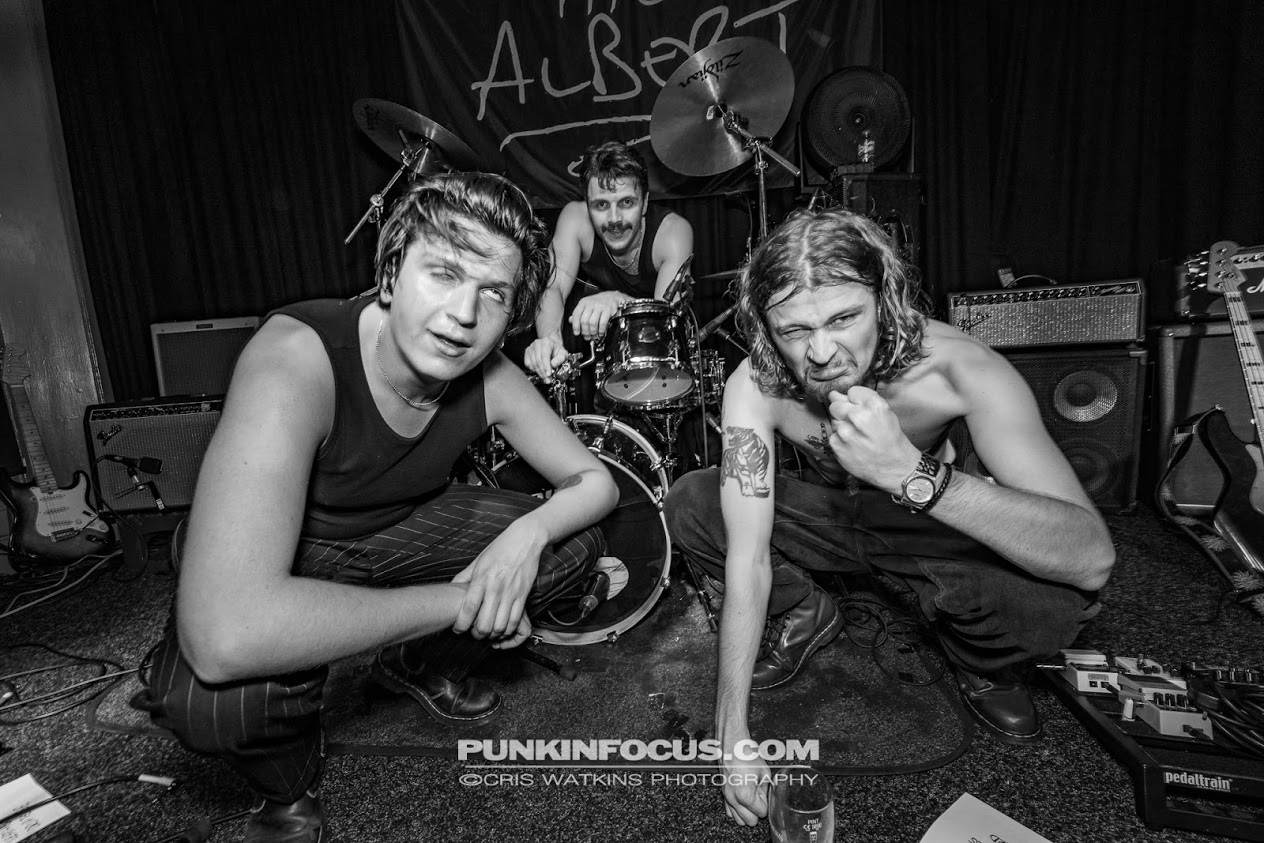 We had to have more! And we most certainly did, having witnessed them live exactly a month later on 8th March 2020. Then 13th March and then 19th December 2020 and recently on 23rd July 2021 Every time they have delivered the goods! They simply do not fail to enthral us! 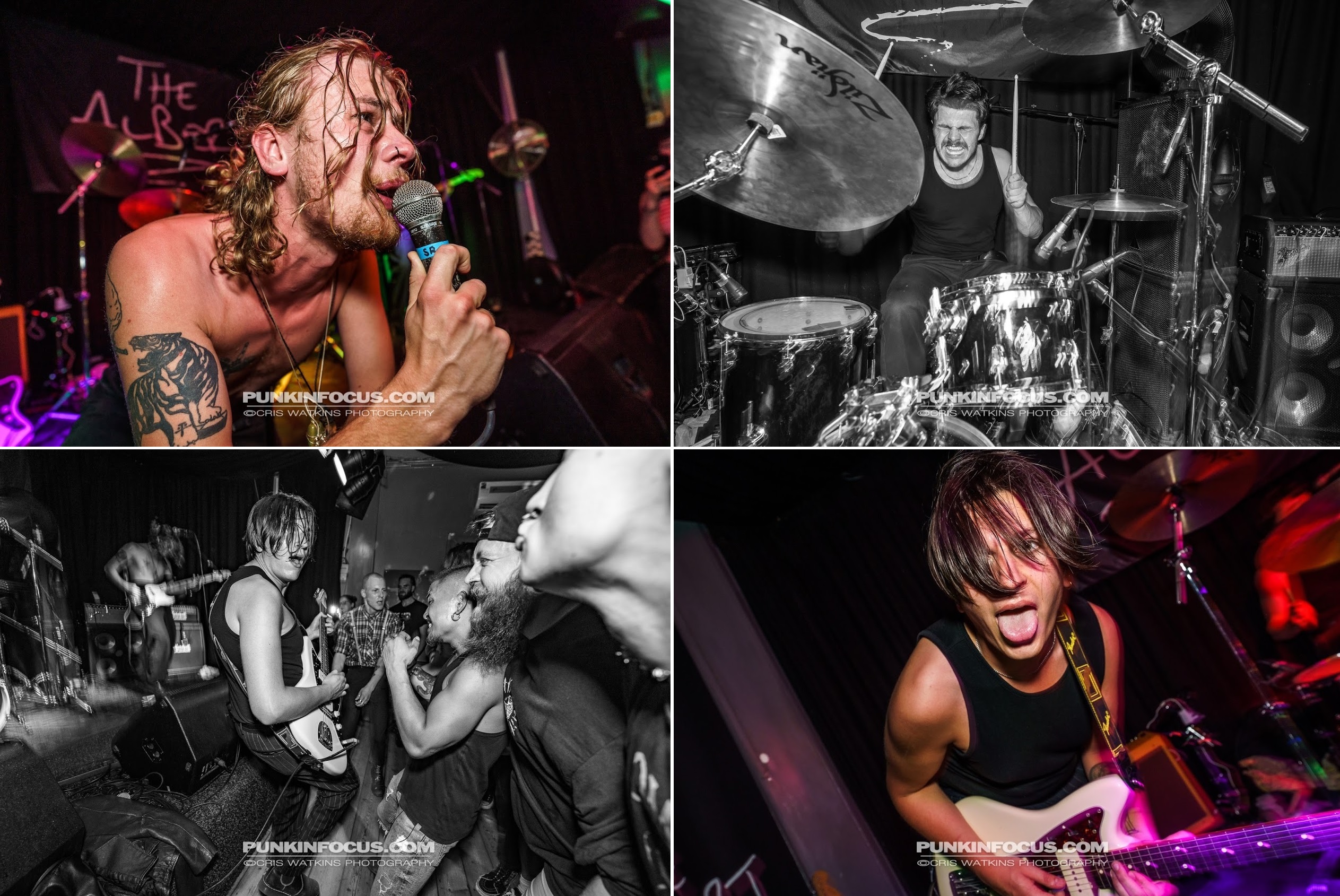 Having only just recovered from their headline slam-fest at The Rossi Bar (review HERE), I’m again thrown into the throng of the fired-up crowd as ‘Animosity’ kicks off the trio’s set. They say you can’t get enough of a good thing and that pretty much sums up tonight, I can’t get enough!. It’s another blinding set from start to finish. From the sheer power of punk rocking bangers ‘Fake News’ and ‘DripTease’ or the sublime ‘Usual Suspects’ with its earworm of a chorus that’ll rattle around in your head for weeks, Monakis have got the punk rock game indeed covered.

They are young and gifted and it’s their time to shine and shine they do this evening. The crowd is as wild as the band on stage, every song met with a mini-riot on the dancefloor. Aaron flips out riffs ten a penny while James tries to bludgeon the crowd with his basslines while Joe is thumping the living shit out of the drumkit. Monakis are seriously a band to catch live, with each show they just keep on improving and finding a unique sound of their own in a sea of Idles clones.

You can now order the band’s new single ‘DripTease’, which dropped on 21st May 2021- grab it HERE. 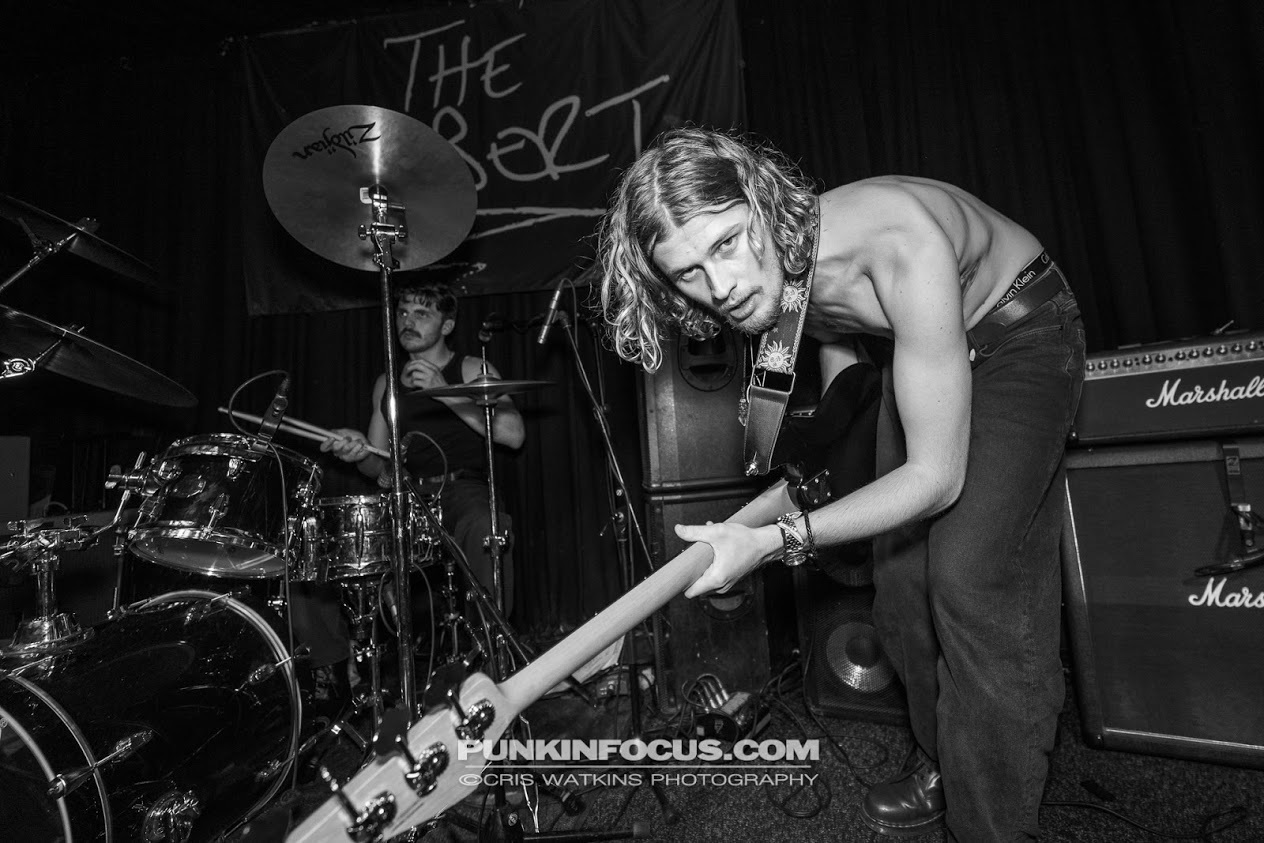 Find out more at: www.instagram.com/wearemonakis 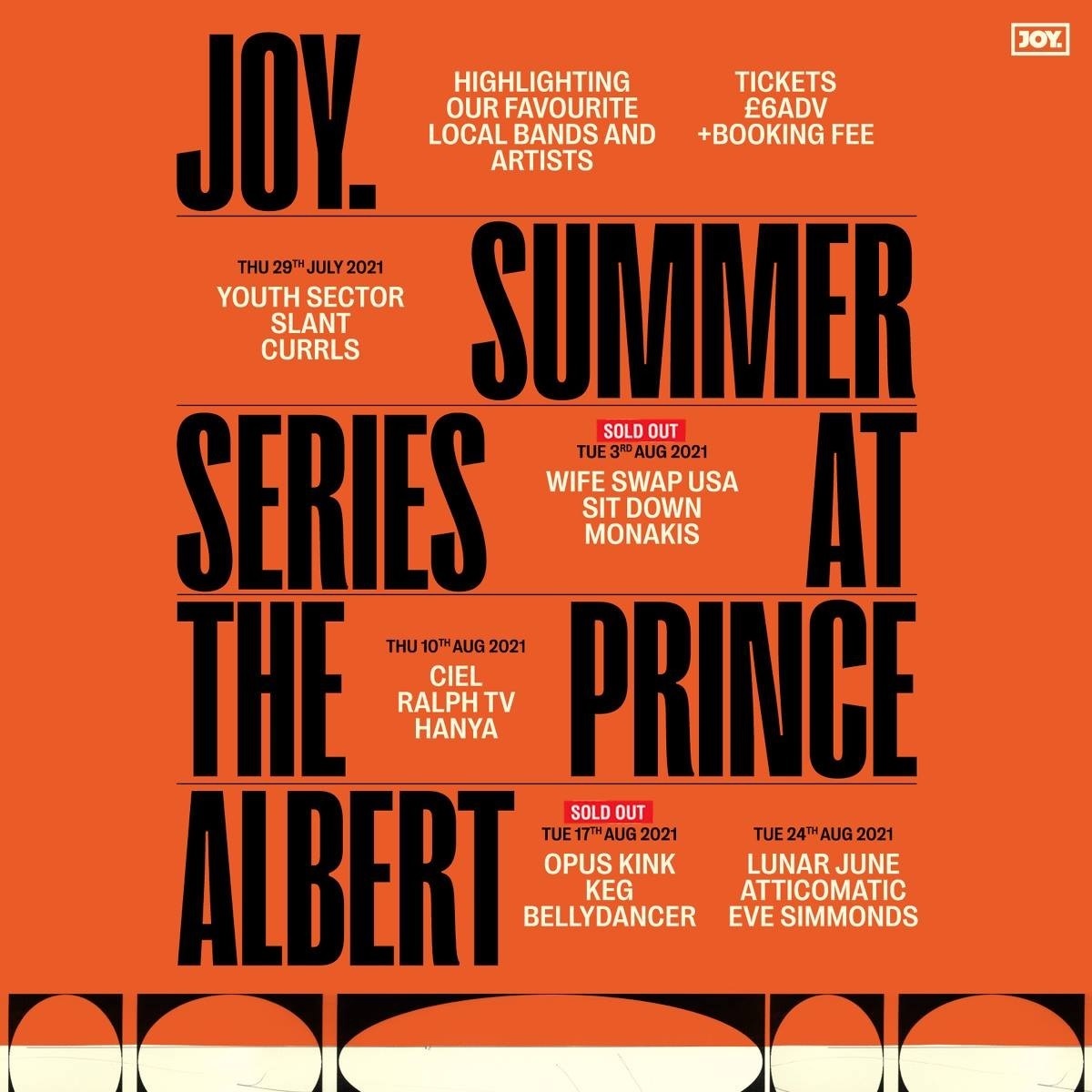 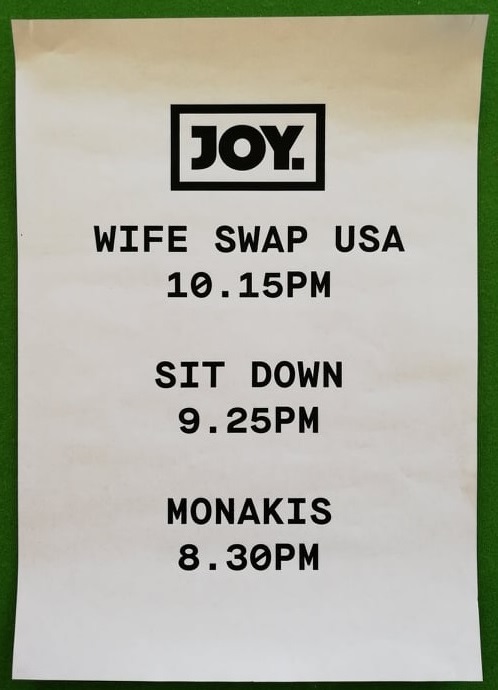 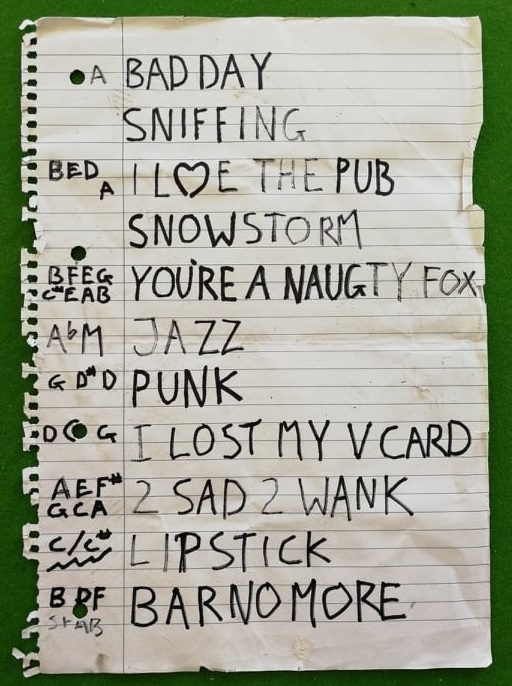 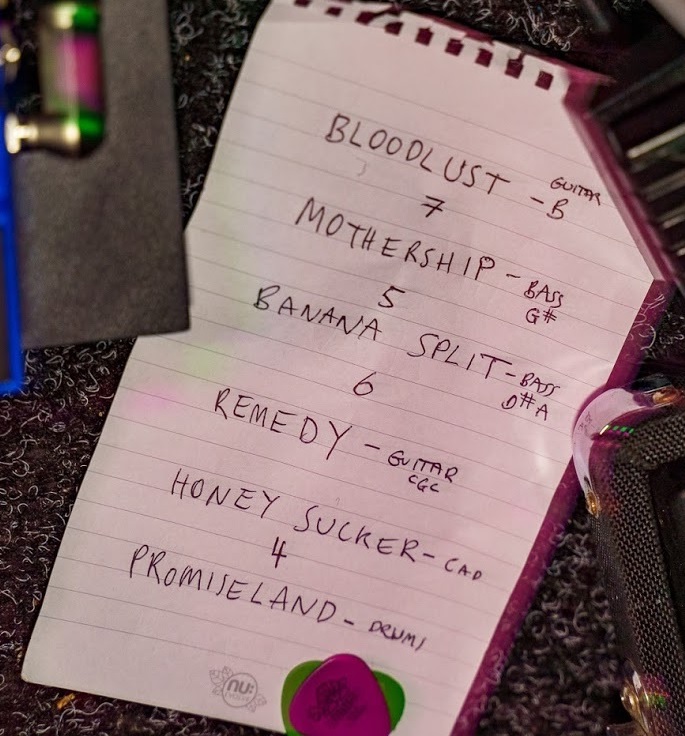 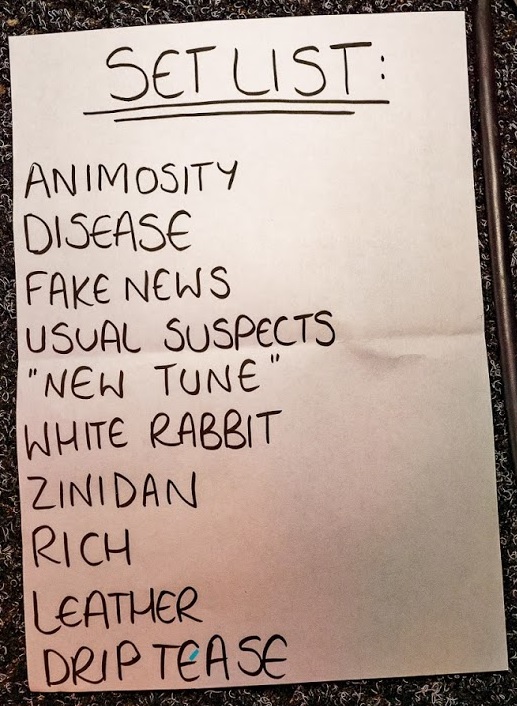