A pub’s hopes of holding a late-night event during what would have been Pride weekend was refused after an objection from Sussex Police.

The police and Brighton and Hove City Council thwarted the plans of the Camelford Arms, in Camelford Street, Brighton, for a one-off extension of its opening hours.

The pub planned to host an event that was billed on its Facebook page as The Pride Party That Isn’t (But Oh Yes It Is).

The pub usually shuts at 1am on Saturday and Sunday morning and 11.30pm on a Sunday night.

Instead, the owners had hoped to close at 3.30am on Saturday 7 August, 4am on Sunday 8 August and 2am on Monday 9 August.

A council licensing panel meet this morning (Thursday 5 August) and uot paid to those plans.

Sussex Police said that it had opposed all similar events during what would have been Pride weekend because it did not have the resources to police any extra late-night crime and disorder.

Extra officers would be deployed in Brighton and Hove over the weekend, force licensing officer Hannah Staplehurst said, because a party atmosphere was expected.

She told the panel of three councillors – Lizzie Deane, Dee Simson and Carol Theobald – that all hotels and short-term holiday lets were fully booked this weekend.

This was, she said, down to a combination of people holidaying in Britain – “staycationing” – and those who wished to celebrate Pride unofficially.

Usually, Sussex Police would call on extra officers from across the county as well as support from Hampshire to police Pride.

The area around St James’s Street, including Camelford Street, would usually be closed for the duration and stewards would be in place but this was not the case this year.

Ms Staplehurst said that any extra late-night events would put pressure on the emergency services.

Last year, she said, the police had attended a house party in Camelford Street.

An officer asked Alistair Mackinnon-Musson, director of Rowbell Leisure, owner of the Camelford Arms, about the volume of people standing outside. 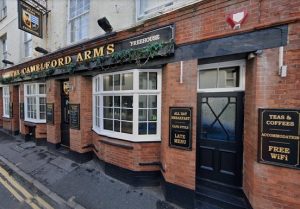 Mr Mackinnon-Musson challenged the police version of events and said that the party was nothing to do with his pub, whose customers tended to be over 45.

Over the weekend, Mr Mackinnon-Musson said that he planned to close his two other pubs, the Three Jolly Butchers and Paris House, to ensure that he had the staff to operate longer hours at the Camelford Arms.

For the past ten years, the gay-friendly pub had operated with extended hours without any issues, he said, adding that there were other venues in the area open much later.

Mr Mackinnon-Musson said that if the late hours were for last weekend or next weekend, it would have been acceptable.

He said: “This sounds to me like discrimination. What we were trying to do here is support the LGBTQ+ community that has been isolated from one another through lockdown after lockdown and bring them together for a few hours – just eight hours – let’s keep things into perspective – over a three-day weekend to reconnect with each other.”

But the panel said: “The event period coincides with the traditional Pride weekend and, even though Pride itself has been cancelled, the panel considers that the city will still attract more visitors than normal.

“The panel notes that the police have objected to all (similar cases) within the city centre for the weekend of Friday 7 August to Monday 9 August so licensed premises will only be operating their within their usual hours. Police resources have been planned accordingly.”

The Camelford Arms can open over what would have been the Pride weekend but must keep to its normal opening hours.