A historic venue in the heart of Brighton can have a new copper roof after Brighton and Hove City Council granted itself planning permission. 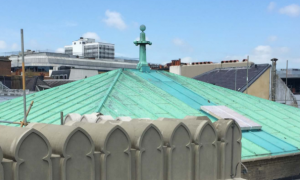 The council submitted a planning application in July to replace the roof of the Pavilion Theatre, in New Road, as work to restore the Royal Pavilion Estate continues.

The bright new copper roof will replace the weathered green roof which has been there for 90 years and which has proved too fragile to repair during restoration work.

The new covering is intended to prevent water leaking through the roof of the grade II* listed Pavilion Theatre – also known as the Studio Theatre.

After work has been completed, the natural bright copper is expected to dull down to a softer brown within 12 months, possibly sooner given the local sea air.

Over time, the colour is expected to “patinate” naturally to the typical “verdigris” – or grey-green or bluish-green – that has long been familiar on the copper-topped domes in the area.

In the past 18 months, contractors have also repaired the Corn Exchange roof, replacing more than 16,000 slate tiles, weighing 55 tonnes, to protect the building from weather damage.

The neighbouring grade I listed Dome and Corn Exchange were originally built as a riding school and stables by William Porden from 1803 to 1808.

Philip Lockwood turned the Dome into a theatre in the 1860s and the Corn Exchange was turned into a concert and exhibition hall later in the same decade.

The Pavilion Theatre was built in 1935, originally as a supper room for the Corn Exchange, before becoming a venue in its own right.

Green councillor Martin Osborne, the council’s lead member for culture and tourism, said: “Replacing the copper on the Studio Theatre will provide a unique opportunity to see what the roof looked like when it was originally built.

“And it will secure the building’s long-term future for visitors to enjoy for years to come.

“It is great to see the restoration taking shape, with works able to continue during the pandemic.

“When the venues reopen, they will make a significant contribution to the city’s cultural recovery.”

As part of the works, the old copper will be recycled by the roofing contractor.