A compromise agreed between the police and a pub company could pave the way for a long-established Brighton seafront venue to be revived.

The owners of the old Doctor Brighton’s, in King’s Road, hope to reopen the premises as the Star and Garter, reflecting the original name of the business.

The panel – made up of three councillors – heard that Sussex Police wanted any new licence to have a number of conditions that did not apply to the previous licence which lapsed.

These included requiring the applicant, Star and Garter Brighton Ltd, to deploy door staff on Friday and Saturday nights.

The force had no objection to the licence in principle because the grade II listed building, which is owned by the council, had historically been a licensed premises.

But police licensing officer Mark Thorogood told the panel that the lapsed licence, which was granted in 2005, had hardly any conditions attached to it.

Since then, the council had tightened up its licensing policy, especially in the centre of Brighton where there had been episodes of drink-related crime and disorder.

Mr Thorogood said: “When the venue was run as Doctor Brighton’s, I can confirm we had no issues there.”

It had never been on the police’s radar for drunkenness, drug-taking, violence or underage drinking, he said, adding: “There will be a few reasons for this – obviously good management – but one that really stands out is that they had SIA (Security Industry Authority) door supervisors on at the weekends, voluntarily.

“It was not a licence condition. They recognised the area they were operating in, the risks that posed and they addressed it.”

He said that criminals looking for vulnerable drunk people, those looking to take drugs or under-age youngsters trying to buy alcoholic drinks tended to target venues without door staff.

Star and Garter operations director Simon Duddington said that he had extensive experience as a pub landlord locally, including on the seafront, having run the Fortune of War on the Lower Promenade.

He said that the company accepted the need for door staff during the summer from 9pm but the venue would be food-led and welcoming families earlier in the evening.

He also said that it would be unfair to insist on door staff in the winter months when trade was slower. 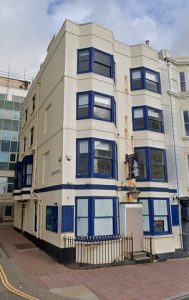 Mr Duddingon said: “If you’ve got a quiet pub and there are door staff on the door, in terms of customer experience, that’s not reassuring. It just says, ‘this is trouble and quiet.’

“The two together are not good for business, in my opinion. I’m more than happy to use door staff.”

He said that risk assessments would lead to door staff being employed at busy times over the winter such as Halloween, Christmas and New Year’s Eve.

After a debate with Mr Thorogood, Mr Duddington accepted that door staff should be deployed from 10pm on Friday and Saturday nights in the winter.

He also agreed that off-sales should be restricted to people seated at the pub’s outdoor tables only.

The owners hope to reopen the pub next spring – from 9am each day, closing at 1am on Monday to Friday and at 2am on a Saturday and Sunday morning.

Mr Duddington’s fellow directors include the founders of Bison Beer, Nick Vardy and Jack Cregan, who also run the Pond and Easy Tiger as the Crafthouse Collective.

The licensing panel should publish its verdict within five working days.