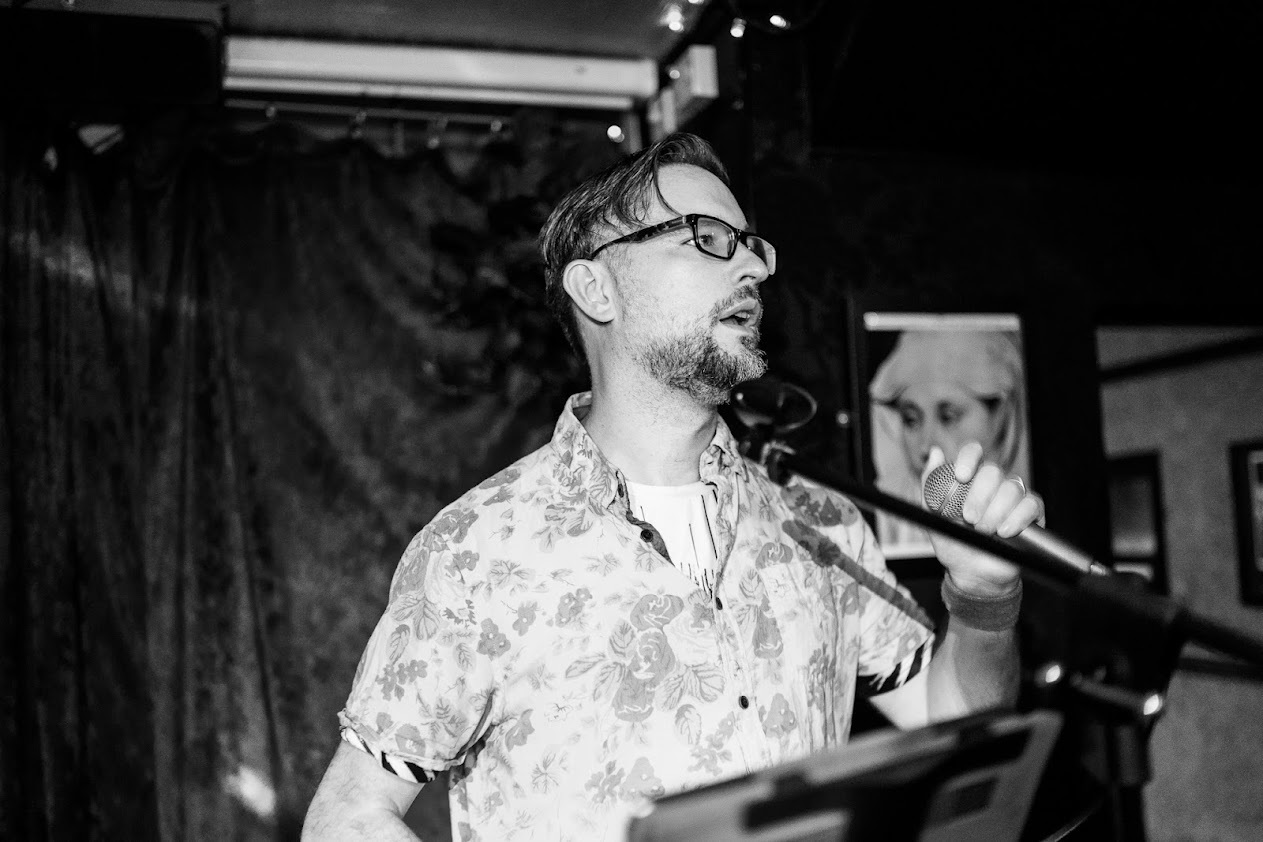 How lucky were we tonight. Not only did we manage to get free after 8pm parking near our chosen music venue, but the duo we were seeing performed for two hours!

Tonight, we were attending a new venue for us, “the hive of ill repute” or as it is better known The Bee’s Mouth, which is located at 10 Western Road, Hove, BN3 1AE. We were there to witness an exciting new synthpop duo who go by the moniker of Pixelstorm. 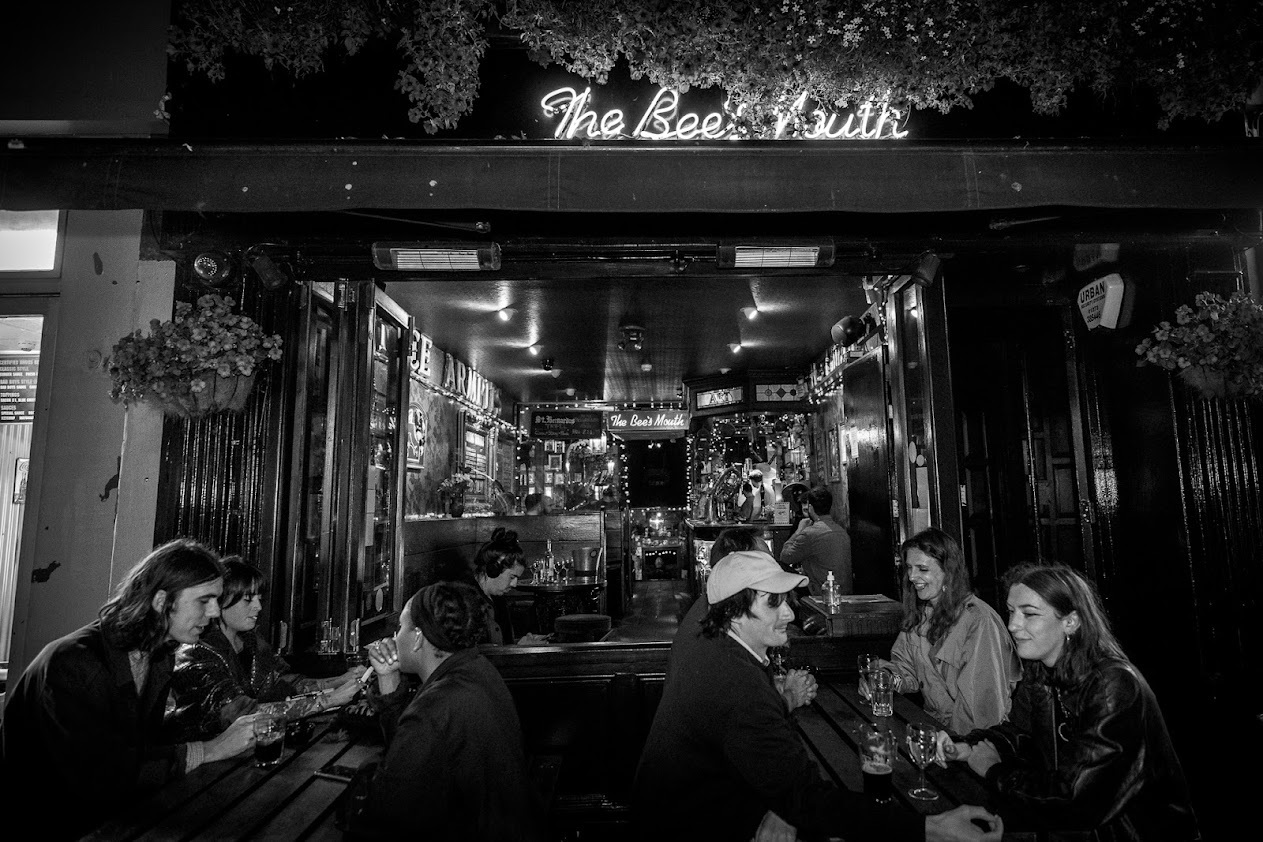 The band decided to get it together in the weeks before lockdown, well in September 2019 to be precise and they have certainly been extremely creative ever since, as we shall see tonight with no less than twenty original compositions performed for us over the space of two hours.

Pixelstorm comprises vocalist Pete, who also turns his hand to mastering the large Roland 908 Keytar – he lives in Reigate – and Jem on Korg synth, other synth boxes and bass guitar – he lives in Farnham. The duo were in Hove for the launch of their brand new 5 track EP titled ‘Pressure Drop’ which came out today – check it out HERE. 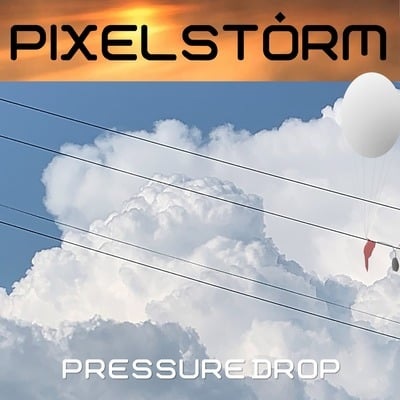 This evening was designed to be an intimate and atmospheric affair as the capacity of the downstairs event room is capped at only 40 people. The room is rather lush like a ladies boudoir and seductive red being the chosen colouration. We are seated on the comfortable lengthy settee that lines the sides.

The duo greeted us on arrival and informed the punters that all of the tunes on the new EP were written during lockdown. Before long they commenced their set at 8:48pm.

The first thing that draws my attention is (not surprisingly) Pete is reading the lyrics from an iPad positioned in front of him, whilst young Robert De Niro look alike Jem is engrossed with his Novation and other box of goodies below. They are dressed for Waikiki Beach and might well have left their surfboards behind the deep red drape behind them. 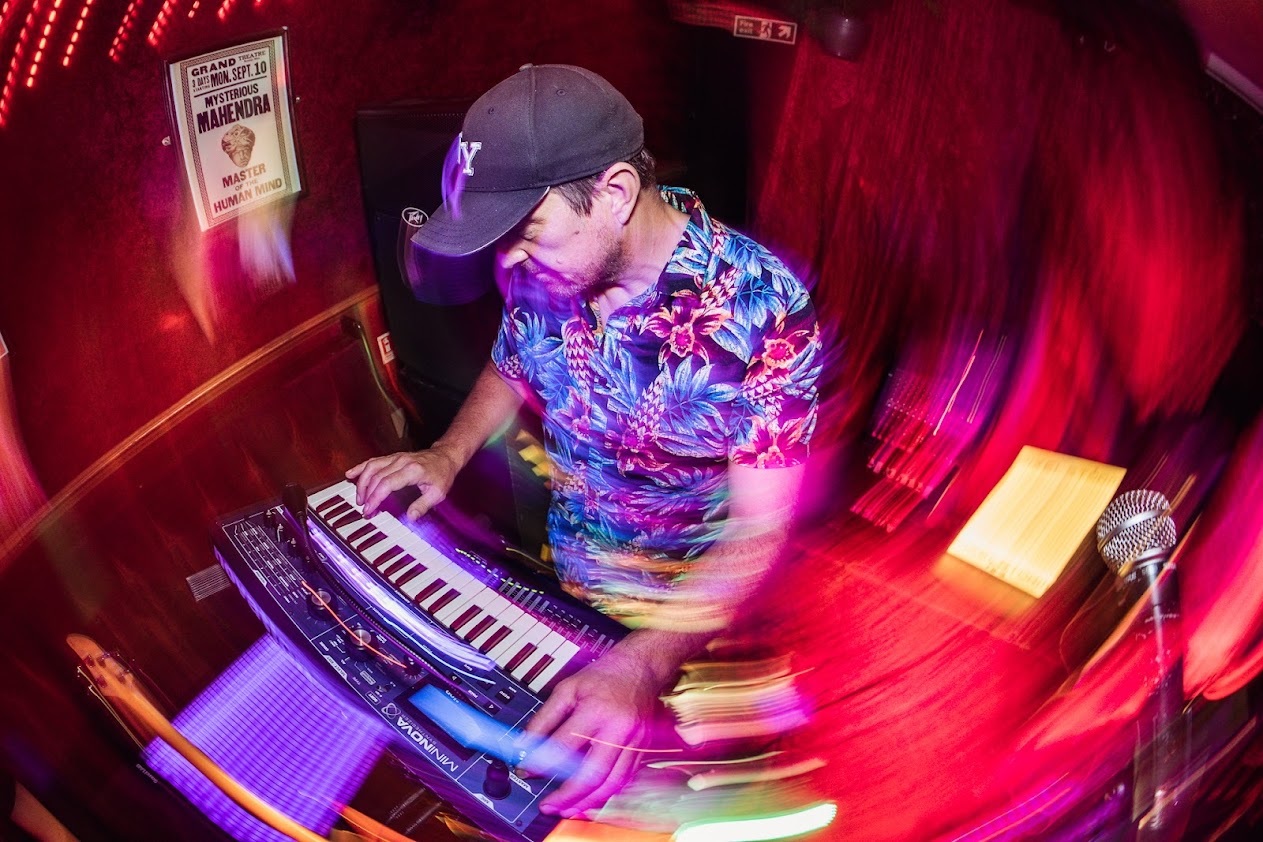 The opening number from their ever increasing portfolio was ‘Statue Of Love’, which is
which is very Bobby O beat meets Depeche Mode’s ‘Just Can’t Get Enough’ and is appropriately about lovers during lockdown. It can be found on the new EP and is a wonderful slab of nostalgic eurodisco synthpop. In fact I would go so far to say that every single number played tonight was just like hearing a distant forgotten early new wave synth hit either here at home or on a sunny European holiday. The tunes are wonderfully familiar and yet they are all brand new self-penned compositions! Are these guys caught in a Dr Who time vortex from circa 1980 to 1988? Could well be!

The second number is ‘Silver Bear’ and you immediately pick up the fact that vocalist Pete is a fan of David Bowie, as his vocal delivery during this set is littered with vocal comparisons. This beauty is rather like ‘Hallo Spaceboy’ mixed with the keyboards of Depeche Mode. Another enjoyable tune.

Track three is titled like the band ‘Pixelstorm’. This conveys a warning message of the dangers of social videos and Jem makes great use of his Novation on this one, sounding not too dissimilar to the Pet Shop Boys ‘Paninaro’ with Pete’s Bowie-esque vocals atop. 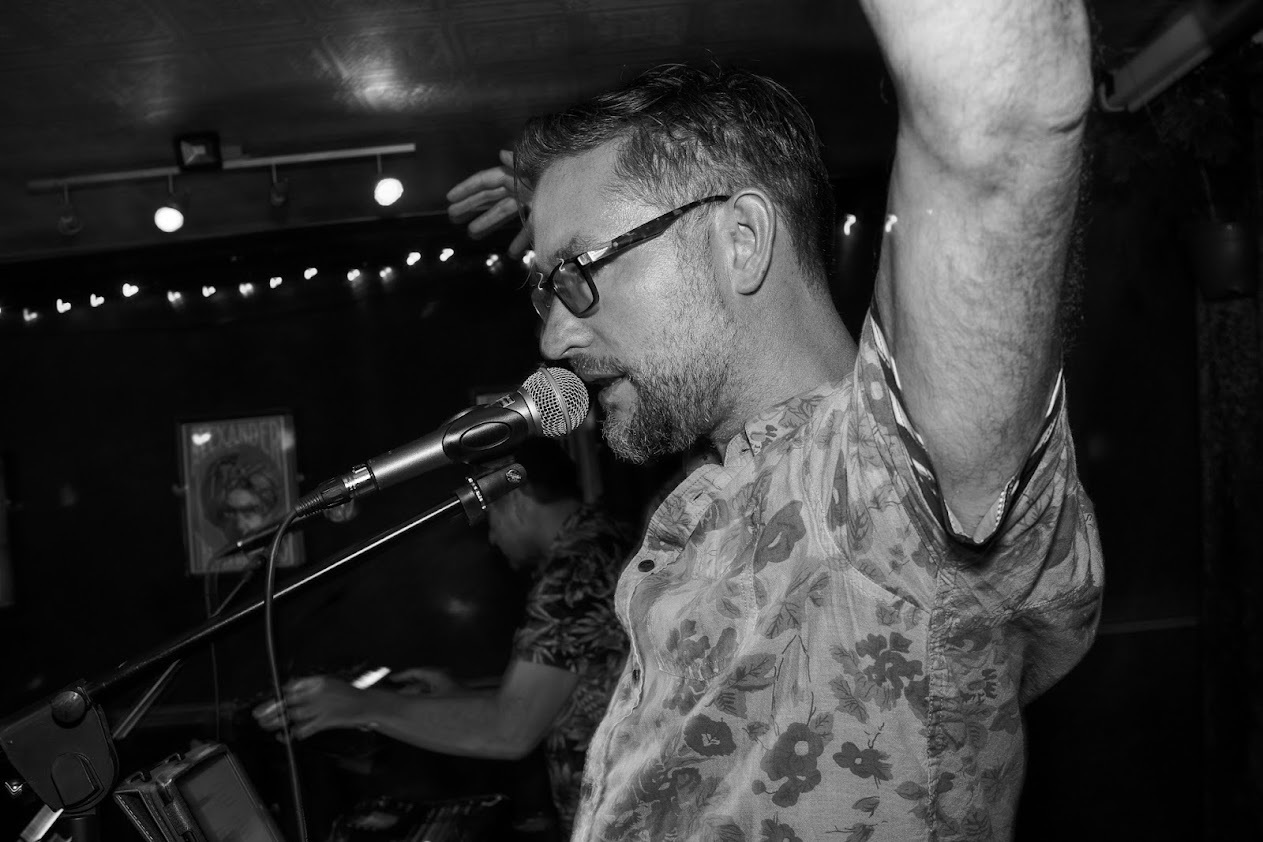 Tune four is the first ever public outing of ‘Jealous Eyes’ and sees Pete don the sizable Roland 908 Keytar over his shoulder. This one has a nice chugging synth beat with a certain nod to The Eurythmics ‘Sweet Dreams (Are Made Of This)’.

This is followed up by the wonderfully nostalgic ‘1984’, (found on the EP) with Jem on bass for the first time tonight. This song name references such timeless childhood delights as Woolworths ‘Pick’N’Mix’ and Cadbury Curly Wurly. It’s hard to believe that this corker does not date from back in the day, but I would suggest it would more realistically be on Mute Records and out in 1980 or 1981 and not 1984.

Next up is ‘No Superhero’ which is not surprising about superheroes and honestly sounds like a missing track from Mode’s debut platter ‘Speak And Spell’. Excellent work!

‘Just Want More’ is track seven and is about food waste. I really loved the keys on this one.

Pixelstorm then have a two or three minute break which allows punters to get the beers in or get rid of them!

They swiftly reconvene with ‘Rise Up’ which seems to reflect the backbeat of The Human League’s ‘The Black Hit Of Space’, which then builds into a crescendo with enthusiastically delivered vocals a tad like Andrew Eldritch from the Sisters of Mercy and Mark Hollis from Talk Talk. Jem has the bass guitar out again. Talking of Sisters Of Mercy, the next swirling beat number titled ‘Mindcraft’, – which is named after the video game by Markus “Notch” Persson – reminds me with Pete’s vocals of the ‘Sisters’ cover version of Hot Chocolate’s ‘Emma’. 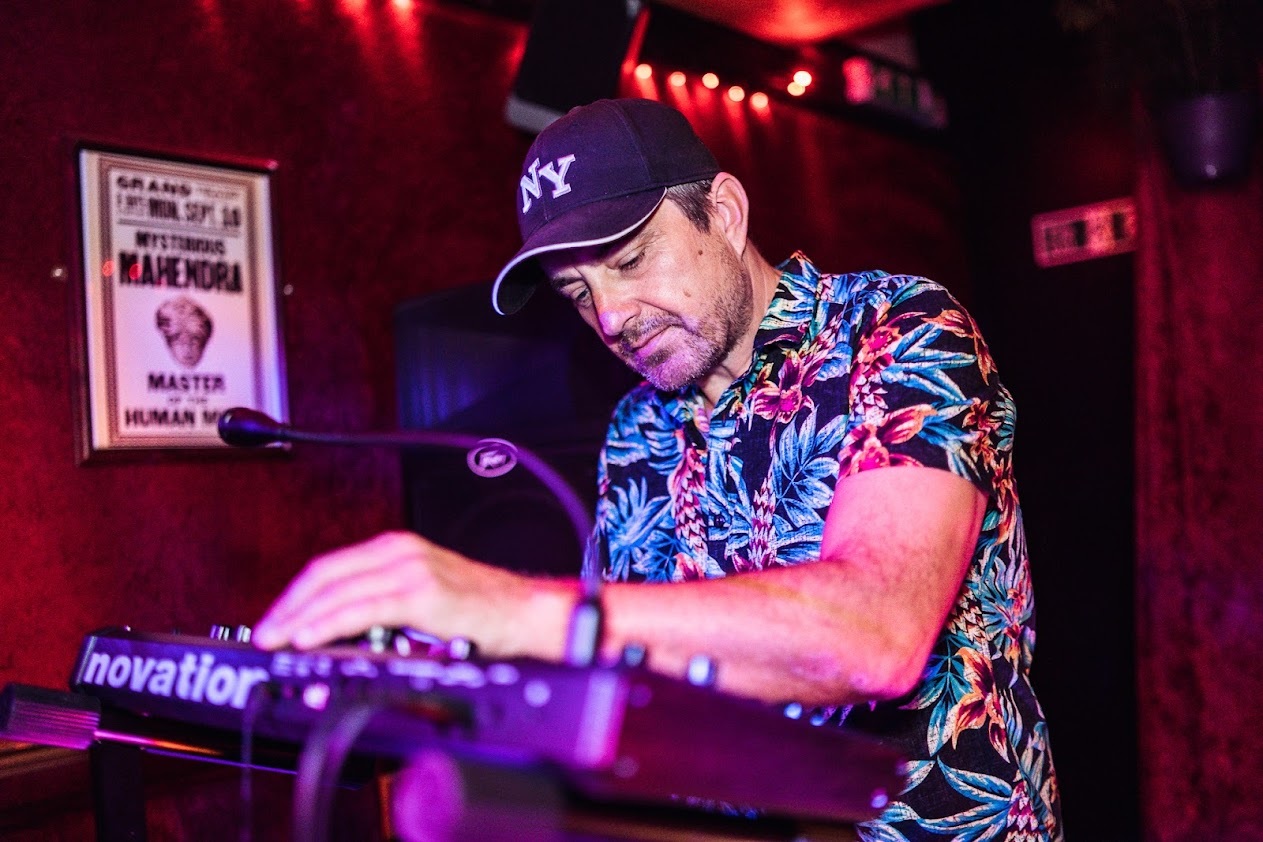 The KITT car from Knight Rider gets its own tune tonight in a 80’s and 90’s dance vibe for a clash sounding somewhere between Madonna’s ‘Vogue’ meets early New Order and Heaven 17 on the way out to Ibiza. They have titled this one ‘Night Rider’ and dropped the ‘K’ for some reason, but hey it’s another fab tune!

Track eleven was ‘Drone Racer’ with its underlying helicopter beat on the intro and outro and in between morphs into pumping synth beat.

The lead tune from their 5 track EP was next, namely, ‘Fix Me’ and I thought to myself “Ooooohhh hello” as the opening synth bars were played, which are very Sigue Sigue Sputnik meets hidden Soft Cell gem Metro MRX, “whoo hoo”.

The keytar makes an appearance again on ‘Electro Shock’, which has a pounding ‘World In My Eyes’ (Depeche Mode) style beat accompanied by Pete’s shouty style delivery. Sing along now….“There’s only one way to reach me now”.

‘Space Armada’ is up next and is a composition about a robot being trapped in space. I particularly enjoyed the heavy style synth on this number, very Clan of Xymox.

The final number prior to the second of the two or three minute breaks was ‘Madman On A Train’ with its “Dance, dance, dance” lyrics. I couldn’t help thinking of ‘Transmission’ by Joy Division. 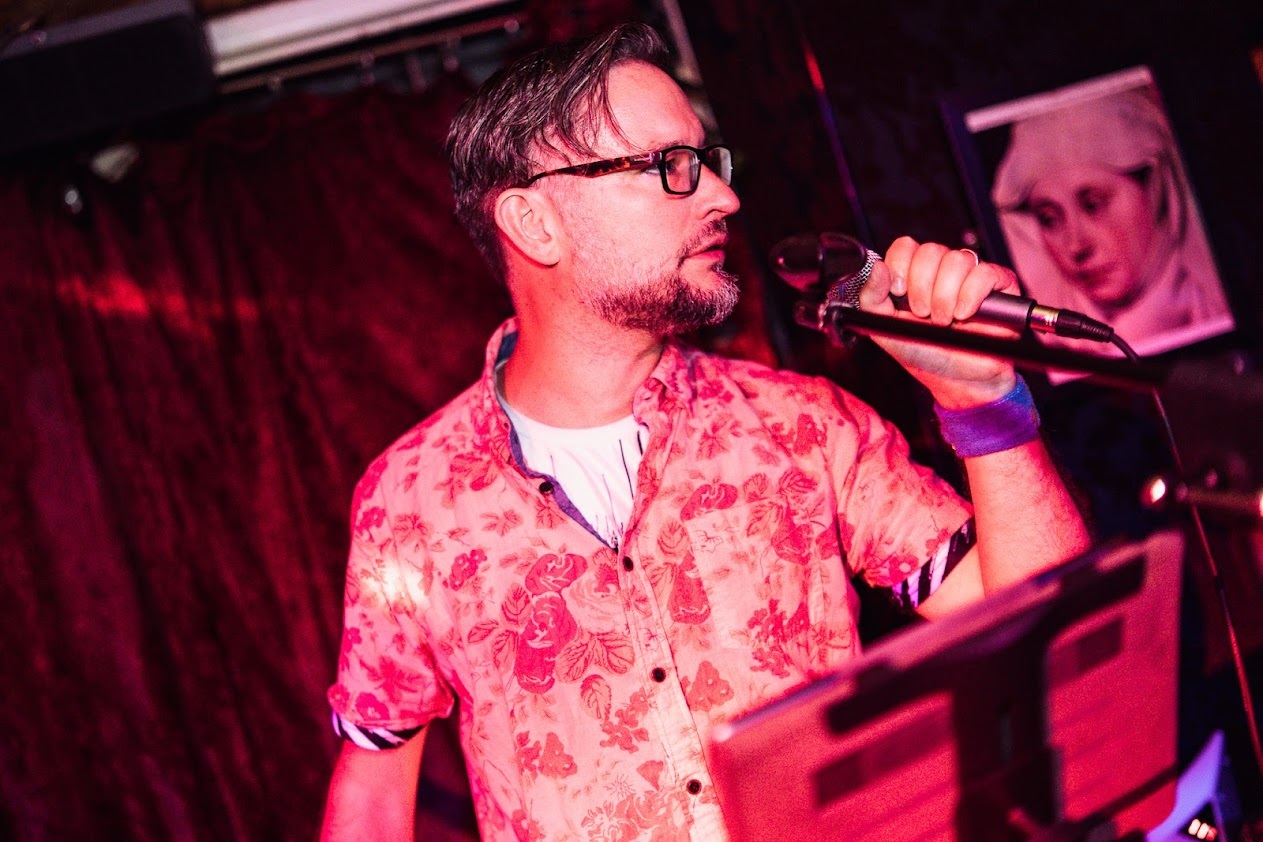 Back from the micro-break and Pete dons a pair of luminous flashing glasses and it’s the turn of ‘White Knight’, with its intro that reminds me of Propaganda’s epic ‘Dream Within A Dream’. This is a hypnotic tune with standout line “Run from me, the White Knight has fallen”.

‘Electric Friday’ sounds like a long lost 80’s anthem from the annals of time probably contained on the ‘E=MC²’ album by Giorgio Moroder, but is actually new. This easy to singalong number (“She takes it all the way, electric Friday”) is found on the EP. Think ‘Hallo Spaceboy’ meets ‘Funky Town’. It’s amazing how prolific Pixelstorm have been!!

We were now onto ‘Solar Flares’ (track eighteen of the night) which was penned about a ball in a disco with really big flares. Oh look, A Flock Of Seagulls have arrived and I’m very pleased about that. This is the best track so far. “Solar Flares in orange, yellow and pure white”.

‘Let’s Build Something New’ is a six minute composition (found on the EP) that takes it down into almost ambient territory with its spoken word dialogue and keyboard work akin to the mighty Jean-Michel Jarre.

The final number is ‘New Synth City’, which is John Foxx-esque and slowly builds and builds….and that’s it!

Oh no it’s not, as the punters simply won’t let them finish. Pixelstorm once again spring into action with a repeat performance of ‘Night Rider’ and conclude at 10:48pm, which is exactly two hours on from when they started!

Brilliant night out! Can’t wait to do it all over again! Hint! Hint! 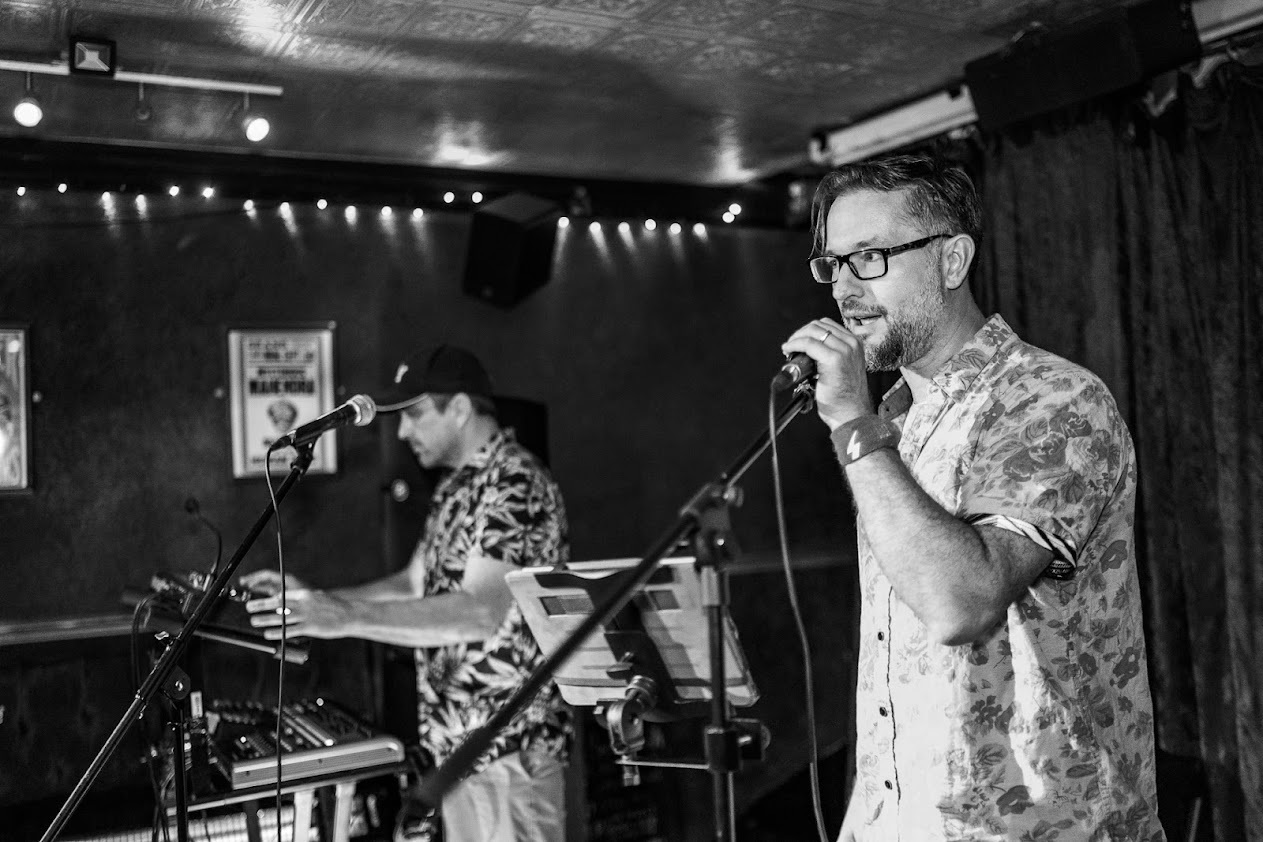 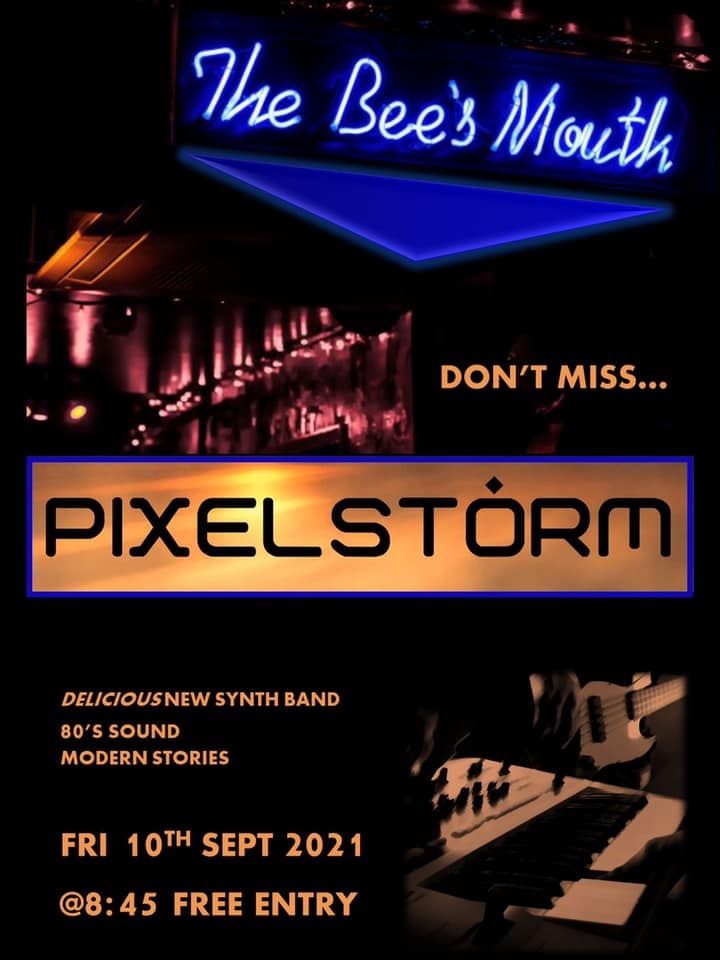