Head, 27, has signed as an overseas player in all formats for the 2022 season and is due to return to Hove in time for the opening match.

He said: “I can’t wait to come back to Hove. There was a great environment last summer and I loved being part of Sussex.

“There’s unfinished business for me and the squad as a whole, so I was very eager to come back, compete hard and perform well. I’m over the moon to be getting the opportunity to do that.

“I’m equally pleased to be captaining the championship side and I want to lead from the front as we continue the journey to bring success back to the club.

“I built some really good relationships with the players and coaches last summer and that will set things up nicely for this new challenge.

“There’s some fine leaders at the club and I’ll be leaning on them as much as possible as we all work really hard to succeed as a group.

“It’ll be great to get over there right at the start of the season and set the tone for the four-day campaign and then build on that for the white-ball formats.”

Sussex’s championship and one-day head coach Ian Salisbury said: “Travis was incredible in the way he conducted himself last year, whether in the dressing room or on the field. He’s exactly the kind of person we want in our environment and around our youngsters.

“We’re very keen to make the most of that as well as harnessing his leadership experience with South Australia, and that makes him exactly the right choice to captain the championship team next season.

“He is of course a supremely skilled cricketer as well. Travis himself has been very honest about how he struggled after missing the start of last season – it takes even the very best a bit of time to adjust to English conditions – but he worked really hard and by the end of his stay we started to see what he can offer.

“With that in mind, it was crucial that he was able to join us from the start in 2022. He’s a fine, fine player and this gives himself the best chance scoring plenty of runs for Sussex. I am delighted to have a player of his calibre joining us next season and so is everyone else at the club.”

James Kirtley, Sussex T20 head coach, said: “It’s great to know Travis is with us next year. He is undoubtedly a talented player but it was what he offered off the pitch that showed what a top man he is. It is these types of characters we want around our environment.

“He watches the game avidly and has great knowledge. Listening to his observations during matches was very insightful and I look forward to learning more from him and getting his views on the game.

“We know he is an outstanding performer and I am sure we will see the best of this in his time at Sussex.” 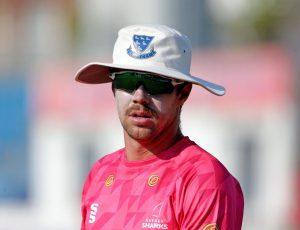 Since his first stint at Sussex last summer, Travis has enjoyed an excellent start to the current Australian season as captain of South Australia.

The 27-year-old is averaging nearly 55 after three matches of the Sheffield Shield first-class competition, with a top-score of 163 against Western Australia in the opening round.

In the Marsh Cup one-day competition, Travis is the leading run-scorer after making 230 from 127 balls in South Australia’s victory over Queensland last month.