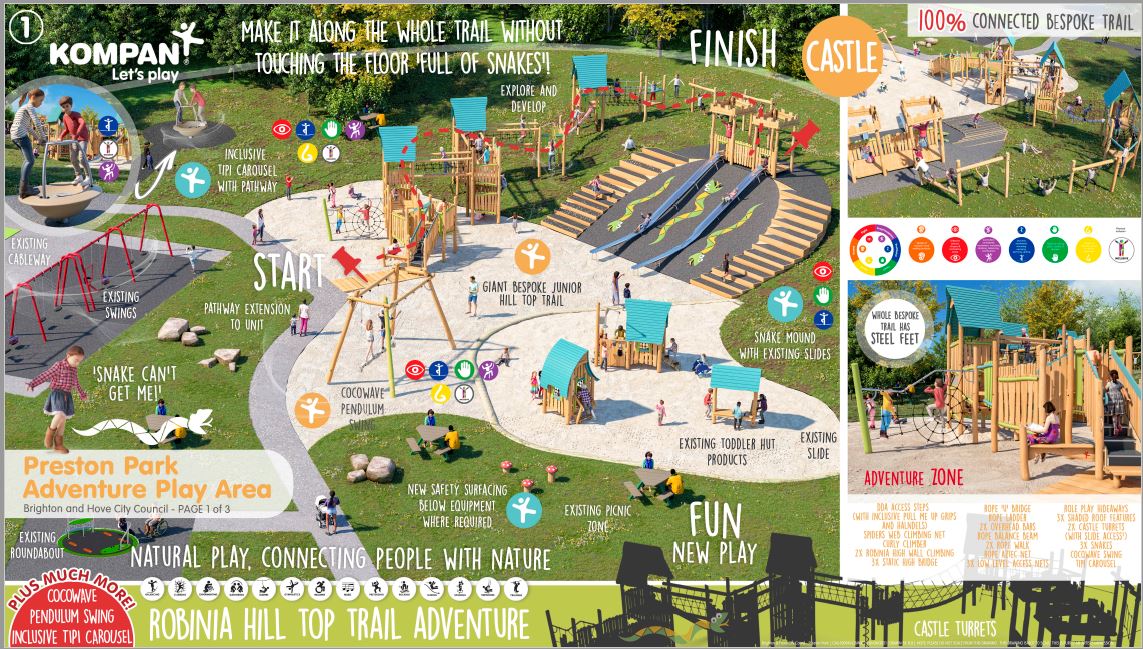 A major playground revamp has started in Preston Park, the latest in a £3 million playground refurb across the city.

Reaction to the first large playground to get a makeover – Hove Park – was mixed, with some parents criticising a lack of equipment for older children, and describing it as an “80s throwback”.

The new Preston Park equipment includes an adventure climbing trail and two long slides – and the council has stressed today it consulted both parents at the playground last year and the Friends of Preston Park.

The £100,000 Preston Park scheme also includes new steps up and down the embankment to a ‘snakes and ladders’ castle, plus 30 challenges to get there.

Also included are a new pendulum swing and carousel, plus new surfaces and an extended path through the area.

Old favourites like the swings, toddler huts, roundabout and picnic zone will remain to complete the enjoyment.

The work is to repair and replace equipment that was past its end of life and in need of replacement.

Friends of Preston Park chairperson Carol Cole said: “We are very grateful that we were consulted by the officers of City Parks regarding the proposals for the new play equipment in Preston Park.

“It has enabled us in turn to consult our 600 members about what they would like to see for their children in the future.

“We had many supportive comments, and we look forward to supporting and working with City Parks with more ideas to cater for very young children.”

Carol added: “We’re delighted to see the imaginative and exciting new equipment being installed now and are sure the local community will be delighted when the newly refurbished play areas are finished and ready to use.”

The Preston Park refurb is due to take another four weeks to complete and the council says that unfortunately it had to close the whole play area while the work is carried out and completed.

The work follows on from the completion of the £100,000 Blakers Park play area refurbishment last month – which overran by several weeks after concrete was found under the sandpit.

Councillor Amy Heley, chair of the council’s environment, transport and sustainability committee, said: “The refurbishment of Preston Park play area is really exciting and will mean children of all ages and abilities being able to enjoy the playground for many years to come.”

Cllr Heley, who also represents Preston Park as a ward councillor, added: “The refurbishment is part of our plans to upgrade 45 play areas over the next three years, with 25 sites being finished by the end of next March.

“Not only will the equipment on the 45 sites be newer and better, it will also be safer and far more accessible for all children.”

A council spokesperson said: “We have carried out consultation for each of the parks we have planned to refurbish before the end of March 2022. This includes working with Friends groups, local councillors, accessibility groups and holding on-site pop up consultations.

“The Friends of Queens Park specifically asked for an official consultation and we agreed due to the complexity of the work and the fact they are raising some funds themselves.

“It may also be possible to undertake further official consultations for sites that have not progressed too far through the procurement process.”

The work at the park is being carried out by leading worldwide playground equipment manufacturer Kompan.

The company designs, manufactures and installs more than 1,000 playgrounds or fitness sites every month across 90 countries.