Parents have started a petition to keep bollards at the end of the road where their children go to school. 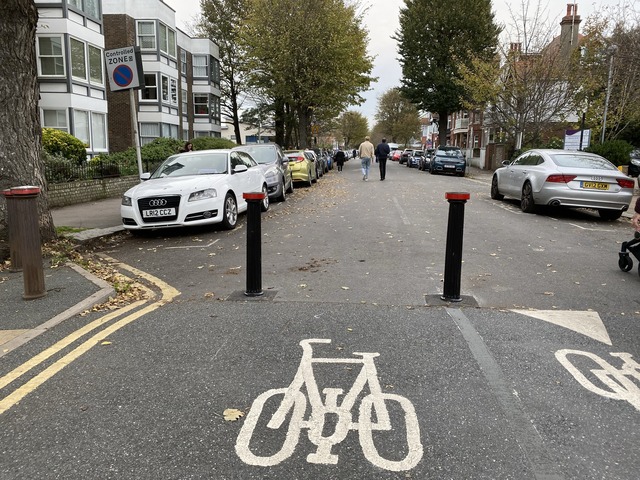 The bollards at the southern end of Somerhill Road in Hove

More than 550 people have signed the petition online and on paper to retain the bollards in Somerhill Road, Hove, close to Brunswick Primary School, as part of the “School Streets” scheme.

The bollards are at the Lansdowne Road end of the street and have kept the road closed to through traffic all day every day.

A gate operated by volunteers at the junction with Somerhill Avenue closes the road to traffic in the mornings and afternoons at the start and end of the school day.

The bollards and gate were put in by Brighton and Hove City Council under an “experimental” traffic regulation order (TRO) which came into force in February.

People were given six months to comment and four people objected to the changes while five sent letters or emails in support.

Councillors agreed to remove the bollards, when the council’s Environment, Transport and Sustainability Committee met in September, while keeping the road closure from 8am to 10am and 2pm to 4pm Monday to Friday.

The petition, which was started at the end of last month, said: “We believe the closure has very positively transformed Somerhill Road to a much quieter, safer and cleaner street.

“The closure has slowed vehicles down and reduced the rat run traffic of people using the street to avoid traffic lights in Holland Road.

“In particular, the improvement for safer crossing at the Lansdowne Road junction (previously a difficult one with low visibility) has been massive.”

Emilie Bruley, a parent who volunteers to manage the gate to allow residents and blue badge holders into the road next to the school, said: “The council is sabotaging the hard work of many volunteers by reopening the street to motorised vehicles without a plan B.

“Therefore, residents and parents of the school are petitioning the council. They are not offering an alternative and haven’t discussed any viable solution for the school to carry on the successful scheme.

“Moreover, it gives the school little time to get organised and advise parents and carers of the reopening potentially putting children at risk, especially the one who got more independent walking, scooting or cycling to school thanks to the scheme.”

A fellow parent and volunteer, Alberto Zanni, a transport researcher, discussed setting up a school street for years before the council initially approved the project last year.

He said: “The closure transformed the street in a very positive way. With it being closed 24 hours a day, it’s become a cul-de-sac.

“The vast majority of residents are happy about it. They have to go around a little further but they don’t have the traffic and noise.”

Brunswick is the largest primary school in the city, with parents and carers gathering in Somerhill Road to drop off and pick up more than 800 youngsters who attend the school.

Anna Hall, a mother of two boys, said that her sons benefited from the road closure. She said: “They get overwhelmed with crowds anyway, so the volume of parents hasn’t changed that in that respect.

“However, they get worried and incredibly anxious when they see someone getting into a car and cover their ears in anticipation of the engine starting.

“This anxiety has calmed down since the road has been closed. I know it sounds like a really minor thing but it’s a big one for them.

“I’ve not been encouraging them to walk in the road like other parents have with their children so use of the road itself hasn’t changed for us.”

Childminder Lisa Smith-Wallace picks up five children each day. She said: “They come out of the school and they’ve got so much more space to be safe and be together.

“They go in a crocodile behind me. I do like it apart from when the electric cars come through because you can’t hear them. I have told the children we have to be safe and use the road safely.”

The online version of the petition, headed Keep the permanent closure by Brunswick school, on Somerhill Road, is on the council’s website.