I was due to attend The Old Market’s Reigning Women diverse programme of events celebrating women, in March 2020, just before the first lockdown. So this then, is the reboot.

This Reigning Women annual showcase is a genre-spanning mini-season of shows and events that are all about celebrating inspiring, interesting and kick-ass women. A happy outcome of this too is the venue also raising thousands of pounds for local charities and good causes, including Brighton Women’s Centre, RISE and Lewes FC. Keep up the good work! 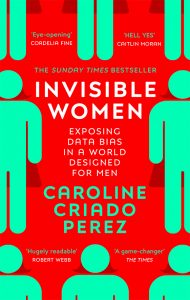 So, the cataclysmic events which followed brought a halt to an appearance by Writer, Speaker, Campaigner Caroline Criado Perez, then on tour for her most recent book, Invisible Women : Exposing Data Bias in a World Designed for Men, (published in March 2019 by Chatto & Windus and now by Penguin Books). However, despite an 18 month gap in proceedings, it’s really great to see this delayed and seemingly very popular event taking place at long last.

In fact, multiple lockdowns seem to have done Caroline Criado Perez no harm at all, as since 2019 her #1 Sunday Times best-selling second book, Invisible Women is being translated into 30 languages, and is the winner of the 2019 Royal Society Science Book Prize, the 2019 Books Are My Bag Readers Choice Award, and the 2019 Financial Times Business Book of the Year Award. So she must be doing something right!

For those of you who might have missed these laurels; ground-breaking author and campaigner Caroline Criado Perez was an instigator in the campaign the Women’s Room project to encourage female experts to be better represented in the media. This came about after listening to Radio 4’s Today programme for two consecutive days where on both occasions, panels of men debated birth control and breast cancer.

She followed this up with a very public outcry about the removal of the only woman from British banknotes (other than The Queen), leading to the Bank of England’s swift announcement that the image of Jane Austen would appear on the £10 note by 2017. She encouraged Twitter to set up the first report abuse button too.

And then just for a hat trick, she set up a petition for a public sculpture of a woman (given how few there are) in Parliament Square, London; the statue of Millicent Fawcett, as part of the centenary celebrations of the winning of women’s suffrage in the United Kingdom.

This evening’s event was a busy one with a largely female audience. But what our speaker had to say during the evening is of relevance to both sexes in so many ways. In conversation with interviewer Lucy-Anne Holmes, Caroline explored how in a world built for and by men we are systematically ignoring half of the population, often with disastrous consequences. 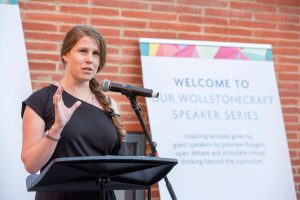 Describing her former self as a misogynist, she took it as a point of pride when young to be an “anti-feminist”, thinking women interested only in shoes and handbags. Her journey to feminism was a “lightbulb” moment which came from reading the book ‘Feminism and Linguistic Theory’ by Deborah Cameron. This turning point was about understanding that the belief in the “default male” lies in every area of our lives, despite the fact that women are 50% of the population.

In an invigorating, witty, frustrating and amusing event, Criado Perez discussed an impressive range of case studies, stories and new research from across the world that illustrate the hidden ways in which women are forgotten, and the profound impact this has on us all. She picked on key examples to highlight how despite contributing largely to the GDP of each national economy, women are so often ignored as they become assimilated into a ‘unisex’ standard, where one size doesn’t in any way fit all.

She explored car crashes and how testing is done using dummies based on the average male body despite the fact that with smaller and lighter frames, women are 47% more likely to be seriously injured in a road traffic accident due to the car seat, belt and set up not being set up for females, as the impact studies all use men a the default human.

This potential loss of life continues into so many other research areas and specifically in medicine where key studies start with using male cells and male bodies “because women’s are far too complicated”, despite the fact that women’s bodies behave very differently with medication, and even on a cellular level.

She discussed the lack of sex disaggregation of data in medical experiments (assuming including women in the first place), meaning that there are dangerous precedents set and opportunities missed for both women and men in terms of treatment and life saving support especially around blood pressure, heart attacks and now, Covid. In fact, the Global Health 50/50 2020 Report found that, among 200 organisations assessed, fewer than four out of ten fully sex-disaggregate data on their programmatic delivery.

This talk covered so many areas, and was throughout, fascinating and relevant. Caroline Criado Perez also touched on the Icelandic Women’s Strike of 1975, snow ploughing in Sweden, cellular responses to oestrogen, AI machine learning, and of course, Poppy, Caroline’s dog.

In tandem with sharing findings from her Invisible Women book, there’s also the reissue of Do It Like a Woman, newly out this year (re-printed by Granta) and in which Criado Perez introduces us to a host of pioneers, including a female fighter pilot in Afghanistan; a Chilean revolutionary; the Russian punks who rocked against Putin; and the Iranian journalist who uncovered her hair. 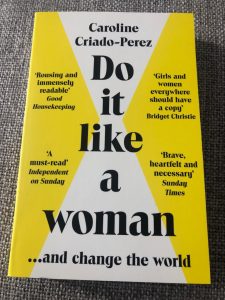 This annual season events focus on promoting women and their achievements, to a wide audience in Brighton and Hove. More of this please, and thank you to The Old Market in Hove for pushing the boat out with an amazing array of events and activities about, for and by women.

If you missed this opportunity to see Caroline speak, you can catch her up online at the Herstories Book Club  organised by Feminist Library on 1st December.

​The Old Market is at:
Upper Market Street, BN3 1AS