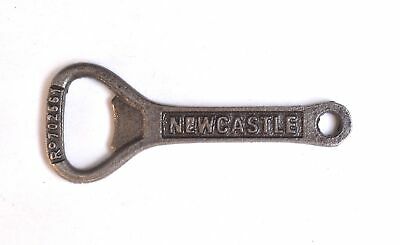 Stock image of a bottle opener

A Gateshead teenager has been fined for throwing a bottle opener onto the pitch just feet away from the goalkeeper at the Amex during the Newcastle game this month.

Ethan Phillips, 19, had used the six-inch metal bottle opener to crack open 15 bottles of beer during the ten-hour coach trip down to Brighton.

He told police he realised it was a stupid thing to do when it occurred to him he wouldn’t be able to open any more bottles on the way back home.

Prosecuting, Martina Sherlock said: “An item was thrown onto the football pitch from the south stand. Mr Connelly, a steward, collected it from the pitch. It was a six inch long bottle opener.

“It had landed within the 18-yard box, 10 yards away from the Brighton keeper.

“As the match continued, security staff reviewed CCTV and we seen to identify the person that had thrown the object onto the field of play and staff there located him and removed him from the stand whereby he was then presented to a police officer on the concourse.

“During police interview, Mr Phillips gave a full account and made a full admission to the allegation.

“He threw the bottle opener onto the pitch, he did not have any intention of hitting anyone. He didn’t think he would be able to throw it far enough.

“When throwing it he hadn’t considered it would hit a player or another spectator.

“He had drunk 15 bottles of beer o the coach journey from Newcastle to Brighton, which started at 6.30am and arrived in Brighton at 4pm.

“He said he didn’t realise the opener was still in his pocket and he didn’t bring it into the stadium as a missile.

“He realised he wouldn’t be able to open his bottles of beer on the coach back to Newcastle and he realised his action was stupid.”

Phillips, who appeared in person and represented himself, was asked by the chair of the bench Ian Goodwin if he would like to tell the court anything in mitigation – or mention Newcastle’s goal in the second half.

The teenager laughed, but declined the opportunity.

PC Darren Balkham, Sussex Police football liaison officer, said: “After excellent work from the Amex operations team, we were able to identify Mr Phillips who made a full and frank admission of his actions. The item landed close to a player.

“He was a season ticket holder. Because of this he now cannot watch football for up to three years at Newcastle or elsewhere in the country.”

A Brighton and Hove Albion spokesperson said: “We will identify and deal with any inappropriate behaviour by imposing club sanctions and, where appropriate, such as this case, seeking prosecutions through the court.

In August last year, Newcastle coach driver Michael Saunderson was disqualified from driving for a year for being in charge of a vehicle while under the influence of cannabis.

His February 2020 trial, which he didn’t attend, heard that he had told police he had become high on the fumes from Newcastle fans smoking on the long journey down to the south coast in April 2019.