Brighton University student speaks out about fatal stabbing near his home

A Brighton University student has spoken out about the fatal stabbing of a 16-year-old boy near his home in Hillingdon.

Bradley Wicks, 18, went home to west London for Christmas and was out when the stabbing happened last night (Thursday 30 December).

Mr Wicks, who lives near where the boy was killed, told the Press Association (PA) that he was not surprised by the incident and feels that young people are increasingly carrying knives.

He said: “I was out at the time and my mum called me to ask if I was ok.

“When the reports came out today and I saw it was in that field at around 8.30pm … it must have been pitch black there at that time. I hadn’t heard anything more about it.

“Hearing that it had happened wasn’t a surprise but very sad. It happens all the time in London now.

“I’ve never had any issues with anyone from all my time living here but you never know what you can get yourself into.

The killing was the 30th teenage homicide in the capital this year – a new record.

Police were called yesterday at 7.30pm to Philpotts Farm Open Space, in Yiewsley, Hillingdon, where the boy was found suffering from a stab wound.

He was pronounced dead at the scene at 8.25pm. 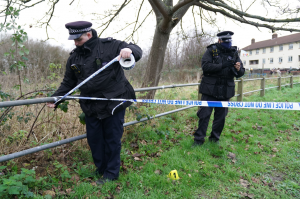 Detectives said that his next of kin had been informed. Formal identification has yet to take place and a post-mortem examination will be held in due course.

The stabbing in Hillingdon happened less than an hour after the fatal stabbing of a 15-year-old boy in Croydon, south London.

UPDATE: The boy who was killed in Hillingdon was named as Ionut Elvis Tacu. An unnamed 16-year-old boy has been charged with murder.