A property developer wants to build six one-bed houses on an old driveway next to a primary school in Portslade. 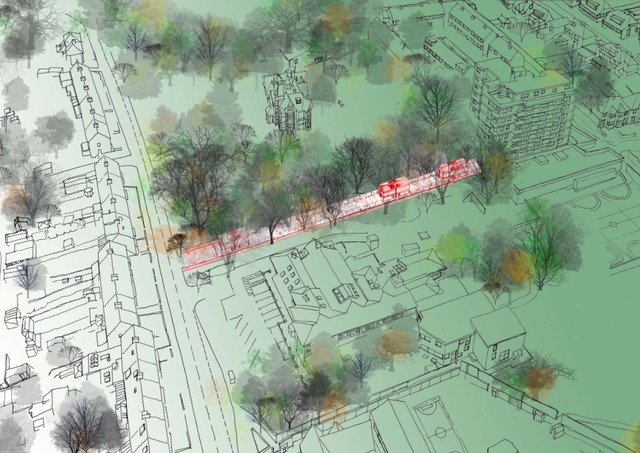 Timothy Jennings has applied for planning permission to build the homes on land by St Nicolas (Church of England) Primary School, in Locks Hill, and close to Brackenbury Primary School.

The land was once the drive for a villa known as Greenways which was demolished and replaced by a block of flats with the same name in the 1970s.

Mr Jennings’s application is due to be decided by Brighton and Hove City Council’s Planning Committee next week.

Officials have give their backing to the scheme but Labour councillor Les Hamilton, who used to chair the Planning Committee, said that the plans were “ridiculous”.

The proposed two-storey properties would go on a site that is accessible to pedestrians and cyclists only, with cycle parking and the bins put out at the Locks Hill entrance.

The site is on the southern edge of the Portslade Village Conservation area next to an 18th century grade II listed house at 8 Locks Hill and near the locally listed Brackenbury Primary School.

But neither the council’s Conservation Advisory Group nor its heritage team has objected to the scheme.

If Mr Jennings is granted permission and goes ahead with the scheme, he will be asked to contribute £113,000 towards affordable housing elsewhere in the area.

Having described the plans as ridiculous, Councillor Hamilton, who represents South Portslade ward, asked that the Planning Committee visit the site before deciding the application.

He raised concerns about the lack of parking and said: “The development site is not wide enough for vehicular traffic. What would happen if there were a fire or need for an ambulance to attend a property?”

The application generated 15 objections and one letter of support, with the Residents’ Committee of Greenways highlighting worries about access, traffic and noise pollution.

The committee said: “While we appreciate that new homes are needed, this is a very odd narrow strip of land and the homes appear rather strange.

“We feel this development and its residents’ access to our property is very likely to cause a great deal of distress to our already vulnerable residents and would significantly devalue our homes.”

The supporter, whose details were redacted by the council, said: “It makes good use of a strip of land currently of no use to others (and) uses good design to provide much-needed starter homes in the area.”

The Planning Committee is due to meet at 2pm next Wednesday (4 May). The meeting is scheduled to be webcast on the council’s website.