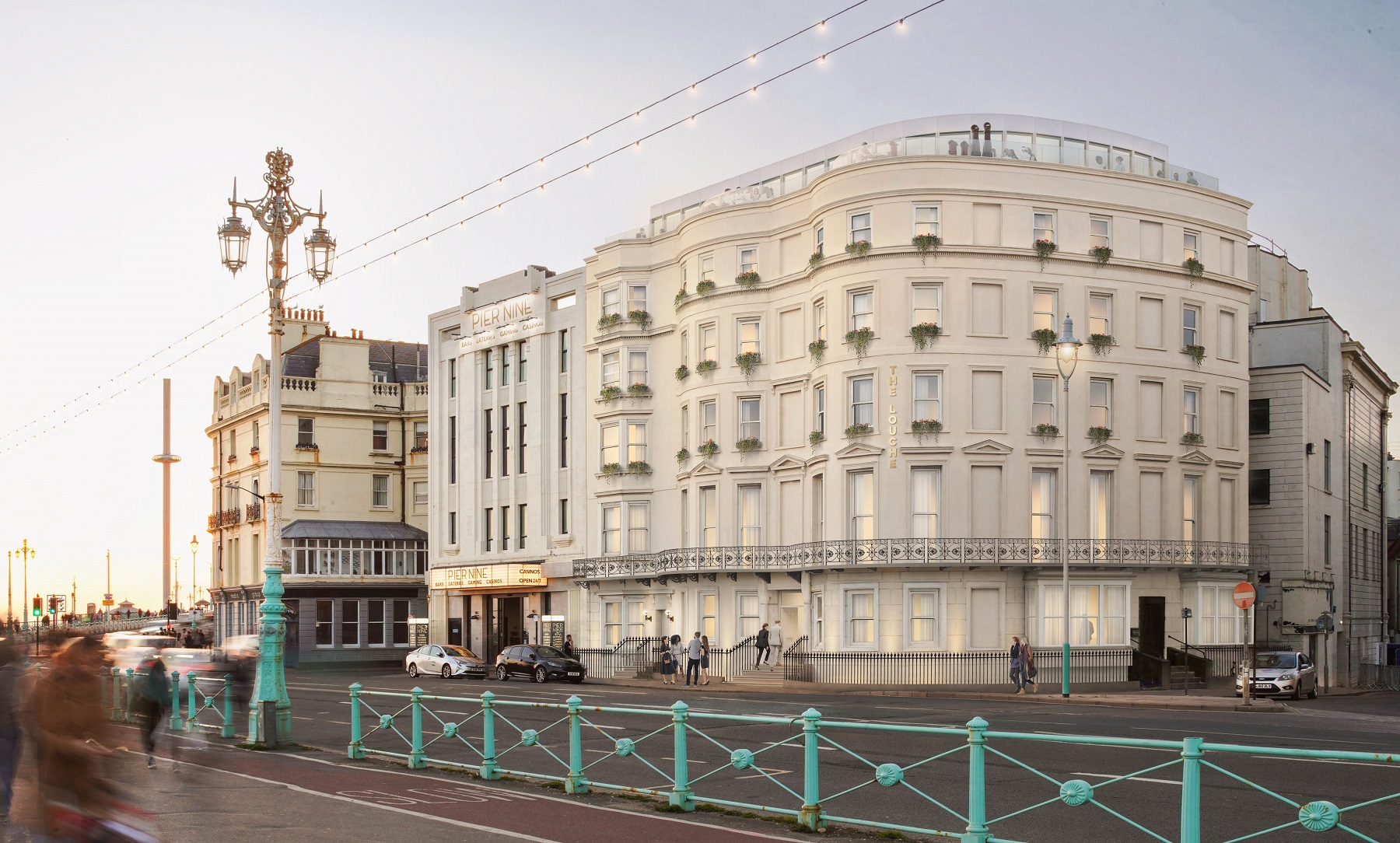 An artist’s impression of the plans

A new luxury hotel with a rooftop bar and restaurant is planned for a derelict former hostel on Brighton seafront.

Sussex businessmen James Randall and Lucky Gohler want to refurbish the empty Hostel Point building next to the Pier Nine casino into a new 40-bed boutique hotel called The Louche.

The Grade II listed building on the corner of Grand Junction Road and Pool Valley which dates from 1830, was originally three houses before being combined into one hotel by 1861.

An additional floor was added to number 11 by 1897, and from 1911 the building was known as the Palace Pier Hotel until the mid-1980s, when it was re-fitted and re-named the Princes Hotel. 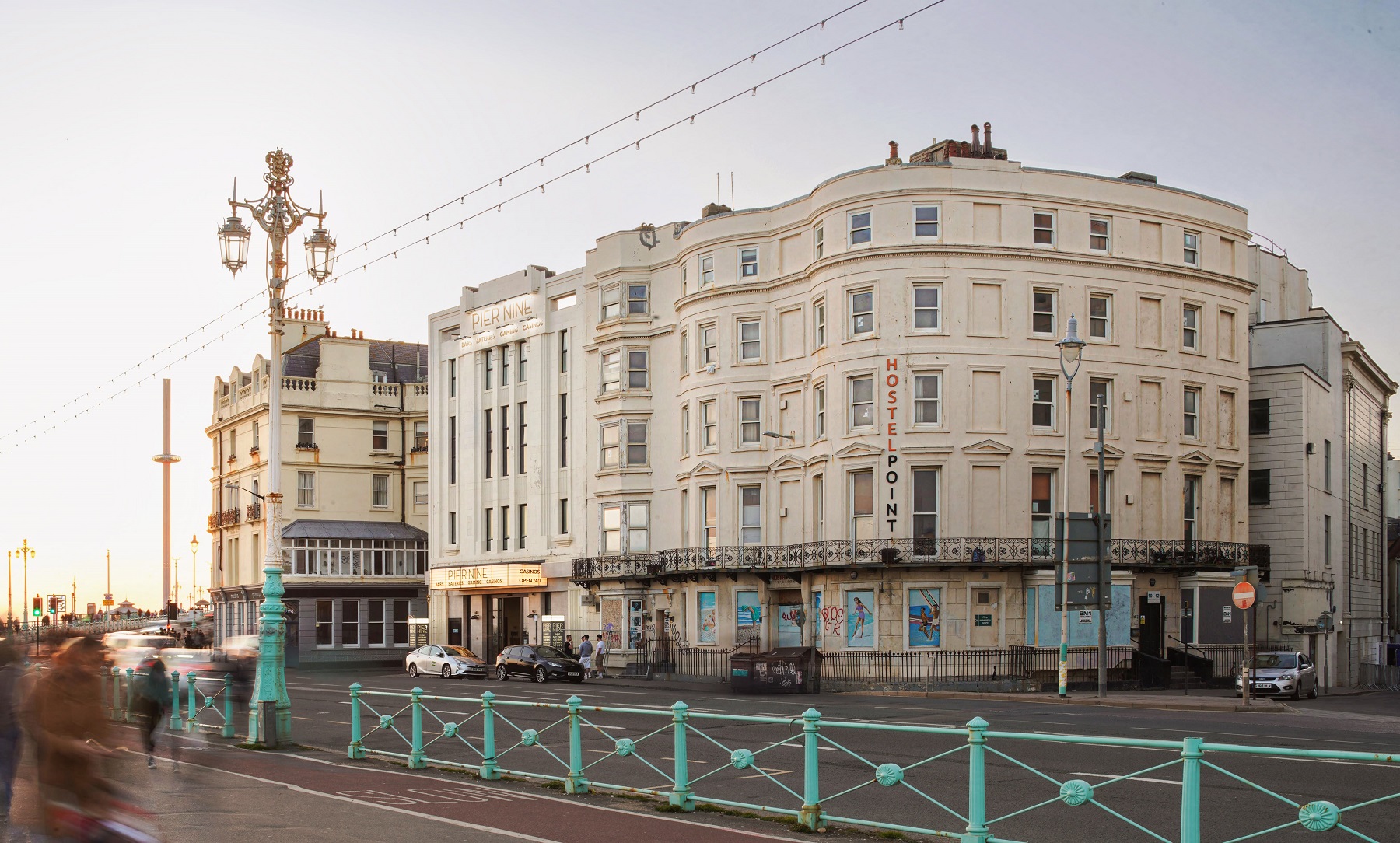 In 2015 it reopened as Hostel Point, offering cheap accommodation to backpackers, but has since closed and fallen into disrepair.

They have submitted plans to Brighton and Hove City Council, which include a rooftop extension for a terrace bar and restaurant, which would be open to the public.

A proposed fifth floor extension would be set back from the building’s façade, with seating areas for visitors along the front and sides of the building, providing panoramic sea views.

Mr Randall said: “This corner of Brighton is ripe for respectful redevelopment, as part of a broader regeneration of the seafront. It needs major investment as the site at 10-12 Grand Junction Road has been neglected.

“If a successful outcome cannot be reached there is a danger that this site will remain derelict for at least another decade and negatively impact the building next door – Pier Nine Casino.”

Mr Gohler said: “Currently there are hardly any rooftop bars and surprisingly, no Michelin-star restaurants in Brighton yet.

“Our city attracts millions of visitors every year, yet we know there’s a shortage of accommodation and an appetite for more high-end options.

“The Louche would help fill this gap, as well as providing a vibrant new venue for local people to enjoy and local jobs.”

Darren Johnson, conference and business development manager at VisitBrighton, said: “The Tourism and Leisure Department would be supportive of any works that would bring the building back into use and to renovate the exteriors in an area which acts as a city gateway to our business and leisure visitors.”

However, both the council’s heritage team and the Conservation Advisory Group, which are consulted on listed building planning applications, are not so keen on the plans.

“There would be some heritage benefits in bringing the listed buildings back into use and good repair (as well as the benefit of opening up the basement lightwell) but these benefits would not outweigh the identified harm.

“It has not been demonstrated that a viable reuse for these buildings cannot be achieved without such harmful intervention or that any harm has been minimised and mitigated.”

The CAG said: “The proposed additional glass storey with its glass balustraded roof terrace would be a very harmful intrusion on the views from various seafront locations and from the Palace Pier.

“The existing four Georgian storeys and Victorian 5th storey of this site, together with the five storey Royal Albion Hotel opposite provide a view into Poole Valley which is balanced in scale. The proposal would upset this balance.

“The loss of the existing chimneys and stacks and the replacement of the front door of no 10 with a window and front door of no 12 with walling would be a regrettable loss of original fabric and together with the harm mentioned above would not be mitigated by the proposed reinstatement of some original features.”

The application can be found on the council’s planning portal here.