Neighbours have objected to a Brighton music venue’s plan to serve drinks to people sitting at tables outside the premises.

Matthew Felton-Dimmack, 41, director of Chalk, in Pool Valley, Brighton, wants to have an outside seating area for the venue and its East Street Bar until 9pm.

The venue, which can sell alcoholic drinks inside the premises from 11am to 3.30am every day, has applied to Brighton and Hove City Council for a variation to its licence.

Mr Felton-Dimmack said that, if the variation is approved, waiting staff would be employed to serve drinks to customers seated outside. And all alcohol would be sold in cans or shatter-proof cups.

When the council granted Mr Felton-Dimmack a licence for the East Street Bar in June 2019, the venue was described as a café during the day. No spirits were permitted on the drinks menu.

The East Street Bar, formerly the entrance to Days restaurant before Chalk moved into the venue, is licensed until 11pm.

The new application said: “When the East Street Bar is being used as a breakout/chill-out area for customers at Chalk, it will be supervised by at least one SIA (Security Industry Authority) supervisor … all alcohol will be securely stored away and no one will be able to bring alcohol in with them.”

Clarendon Mansions Residents’ Association and a neighbour have objected to the proposed changes which are due to go before a council licensing panel next week.

An objector, whose details were redacted by the council, said that people living in Clarendon Mansions already suffered from night-time noise.

The objector was also concerned about congestion because a number of venues in the area already have seating on the street.

“This area is already congested and residents on occasion have struggled to access East Street and Pool Valley on busy weekends because of the proliferation of A-boards, seating and street furniture.”

The residents’ association was also concerned that the bar was becoming part of the night club. It said: “There is nowhere for this seating to go in East Street that doesn’t block the public highway. 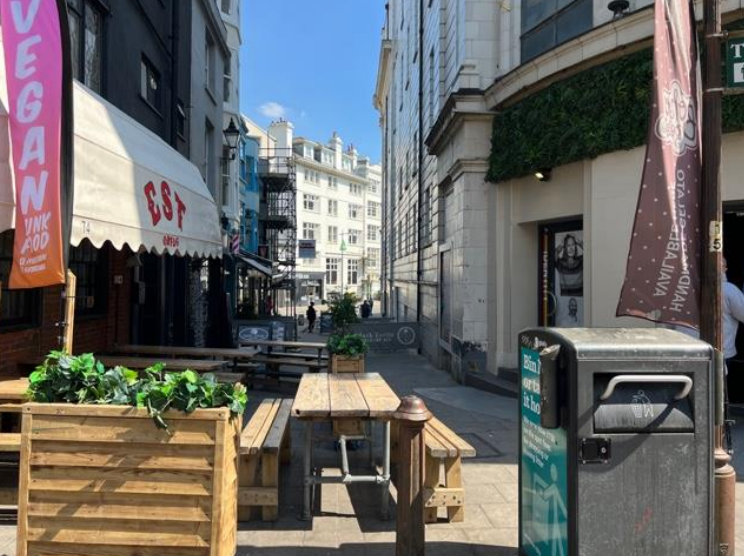 The entrance to Pool Valley from East Street in Brighton

“The road space beyond the no entry sign in East Street is still a public through route via Brills Lane. Chairs and tables cannot be placed there.

“In addition, we were told the bar in East Street would not be connected to the night club.

“Now, through salami tactics, slice by slice, it’s a chill-out zone for the club. How did that happen?”

The licensing panel hearing is due to start at 10am next Tuesday (24 May) and is scheduled to be webcast on the council’s website.