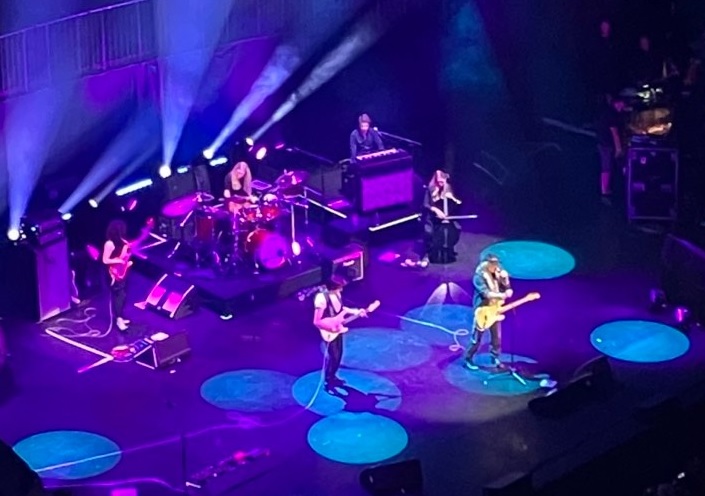 Jeff Beck absolutely needs no introduction, but he’s going to get one anyway. Along with Eric Clapton and Jimmy Page he was a graduate of The Yardbirds in the 1960s. In 1968 he formed the Jeff Beck Group with Rod Stewart on vocals, Ronnie Wood on bass and Aynsley Dunbar on drums. In the early 1970s he teamed up with Tim Bogert on bass and Carmine Appice on drums to form Beck, Bogert and Appice. After that he went solo performing jazz rock and basically pretty much any other genre that took his fancy. He remains one of the most innovative, inventive and exciting guitarists performing today. 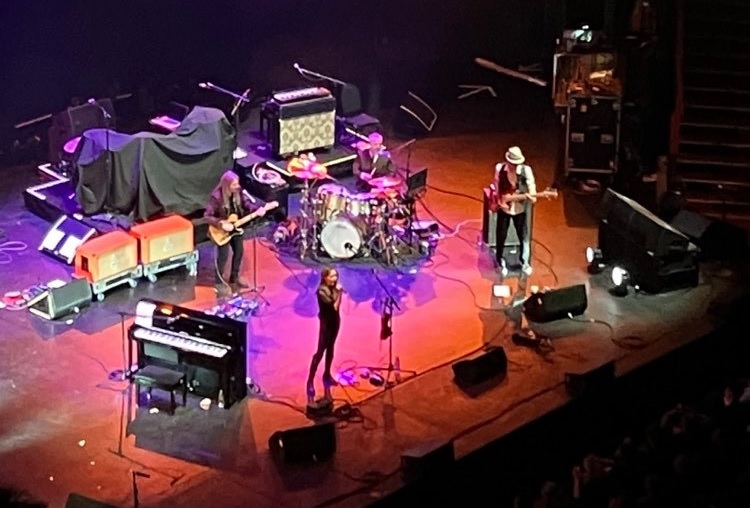 Tonight’s support act is Sharon Corr, from The Corrs. She certainly doesn’t shy away from playing Corrs songs, the first three songs (‘So Young’, ‘Radio’ and ‘Runaway’) being from that band. However, Sharon would prefer to concentrate on her most recent album, ‘The Fool And The Scorpion’, which came out in 2021, and from which she plays three songs: ‘My Beautiful’, ‘Running On Rooftops’, which is about suffering from a hangover, and ‘Under A Daylight Moon’. This is all very nice, very pleasant, but by God it’s soporific! Indeed, two of the guys sitting near me are asleep. I kid you not! Although they may have been drinking, but still…. During the interval I have to tell them not to snore during Jeff Beck’s performance! Sharon finishes her set on violin with an untitled jig, which is by far the most exciting thing she’s played all night! Now if we could just have had more of that…… 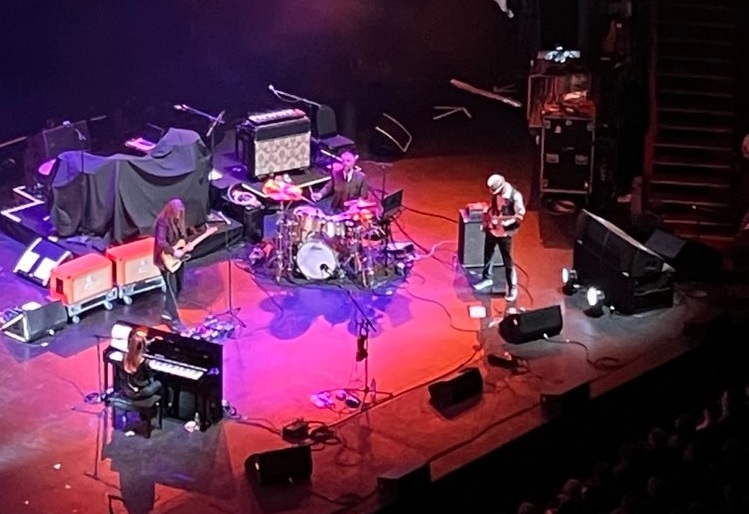 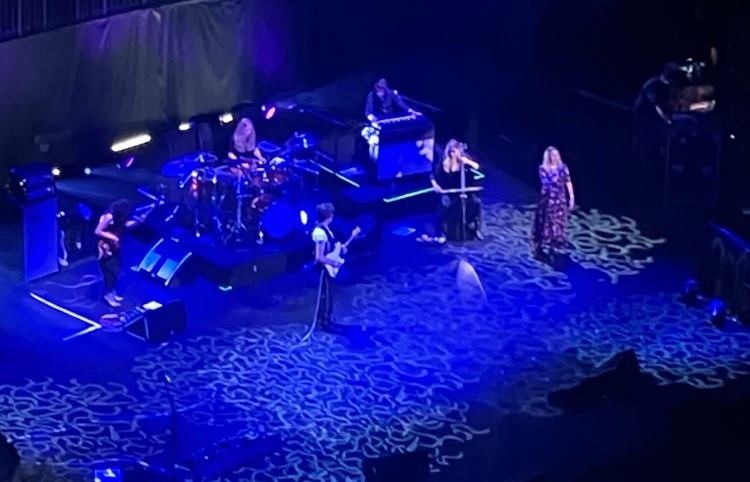 Luckily we don’t have to wait too long for Jeff Beck. Just long enough to head to the bar and get an overpriced gin and tonic in fact. The great man starts in fine style with ‘Star Cycle’ (used as the theme tune to ‘The Tube’ music TV show in the 1980s) from the ‘There And Back’ album. There’s something utterly primal in the way Beck rips notes from his guitar. It’s like an animal screaming – in agony or in ecstacy…..

Jeff has surrounded himself with a band of virtuosos. He allows them to shine too. The bassist comes to the front of the stage and takes a lengthy solo, and the drummer is absolutely awesome throughout. The cellist plays a beautifully rich sounding solo which then intertwines with Beck’s guitar. Some of his soloing is utterly bewildering.

There’s a great version of Link Wray’s ‘Rumble’, which Jeff tells us Jimmy Page described as “the first real punk single”. There’s also a version of The Beach Boys’ ‘Don’t Talk (Put Your Head On My Shoulder)’ for which a female vocalist appears.

The stage announcements made by Jeff are a little unclear, a bit mumbled, so when he mentions somebody who he’s been meaning to work with for five years, it’s unclear who he’s actually talking about. Anyway, on walks this scruffy bloke wearing a cap and clutching an acoustic guitar, and it only becomes clear after a minute or so that this is Johnny Depp! To say that this is unexpected doesn’t even begin to describe my feelings about his appearance onstage. I must confess I’m a bit dubious at A-list celebs playing at being rock stars. To be fair, Johnny soon proves that he can sing and play, but well enough to guest with Jeff Beck? Well, Jeff clearly seems to think so. 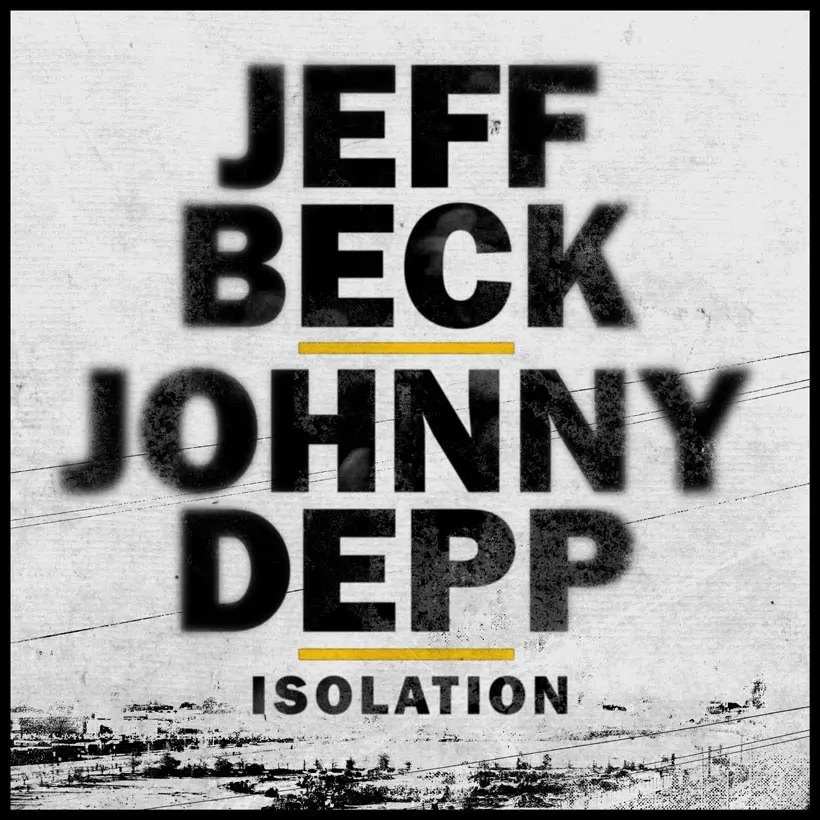 It soon becomes clear that this is something more than just a walk-on walk-off guest appearance. Depp is clearly well-planted on the stage. There is a reason for this. It transpires that Beck and Depp had an album entitled ‘Isolation’, which apparently came out in 2020. This is a record that I was entirely ignorant of, and which is seemingly a comment on the lockdown experience that we’ve all had in recent times. We get a significant slab of the album, including a song about ‘Hedy Lamarr’, the title track (John Lennon’s ‘Isolation’), Marvin Gaye’s ‘What’s Going On’ (an apposite song for today if ever there was one), a coruscating version of ‘Little Wing’ by Jimi Hendrix, and a totally unexpected version of ‘The Death And Resurrection Show’ by Killing Joke.

Depp sidles offstage without fanfare and Beck finishes the set with ‘Cause We’ve Ended As Lovers’ and ‘Corpus Christi Carol’. Jeff and the band are only offstage for two or three minutes before they return with ‘Brush With The Blues’ from the ‘Who Else!’ album. That man Depp appears for the final encore, an utterly mind warping version of The Beatles’ ‘A Day In The Life’.

This has been a quite remarkable gig, for more than one reason. Jeff’s playing has been absolutely mind blowing as always. However, most of the audience probably weren’t aware that they were attending a Jeff Beck & Johnny Depp performance. Still, the ‘Isolation’ album seems to be what Jeff Beck is excited about at the moment, so I guess that it would be churlish of us not to enjoy it with him. 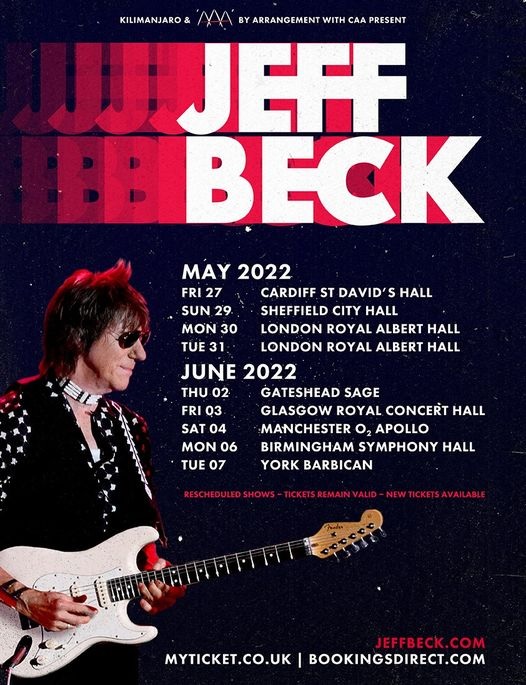