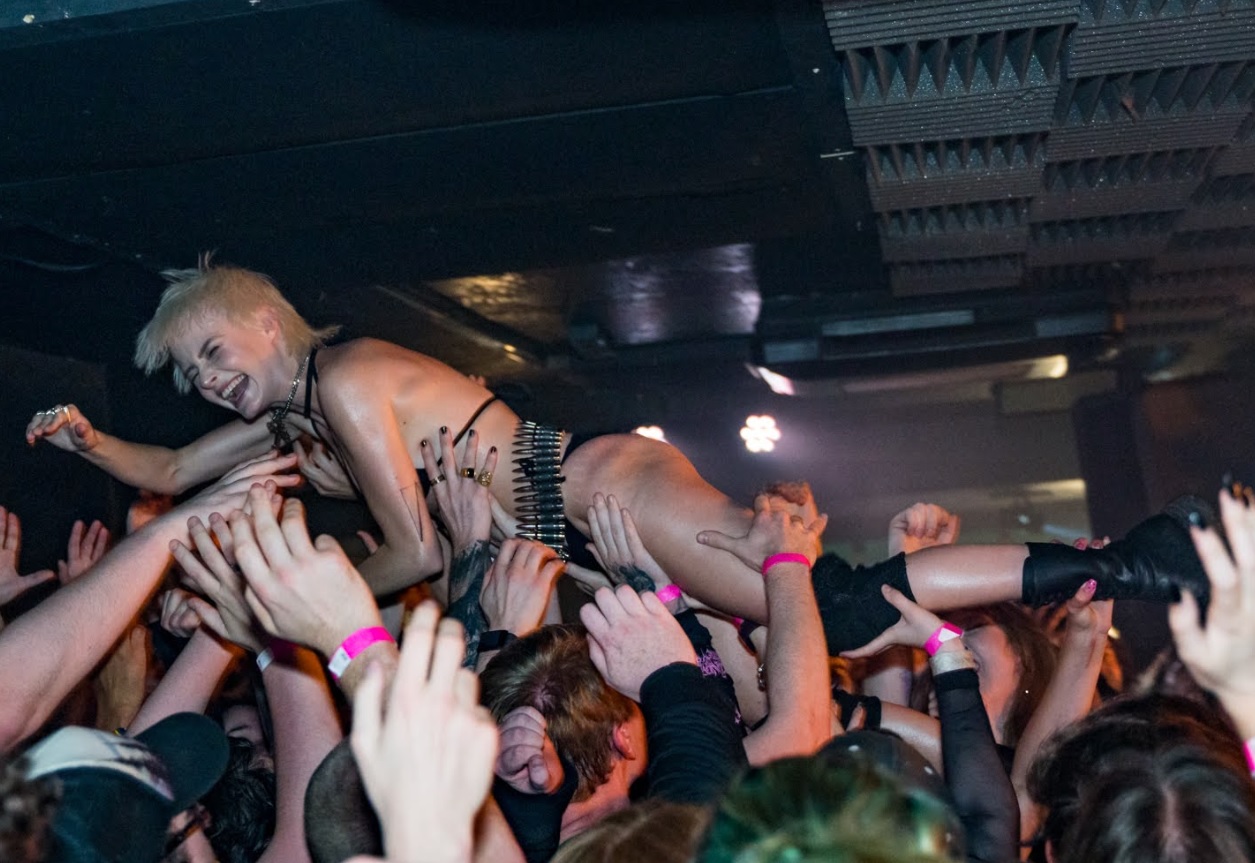 In all honesty, I don’t think I can review Wargasm with the cold distance of objectivity. I’ve been a fan since their early shows back in 2019, and have watched their ascent from intriguing new project by a former Dead! guitarist and a gig photographer always in the thick of the action to unquestionable game changers in the modern rock landscape. 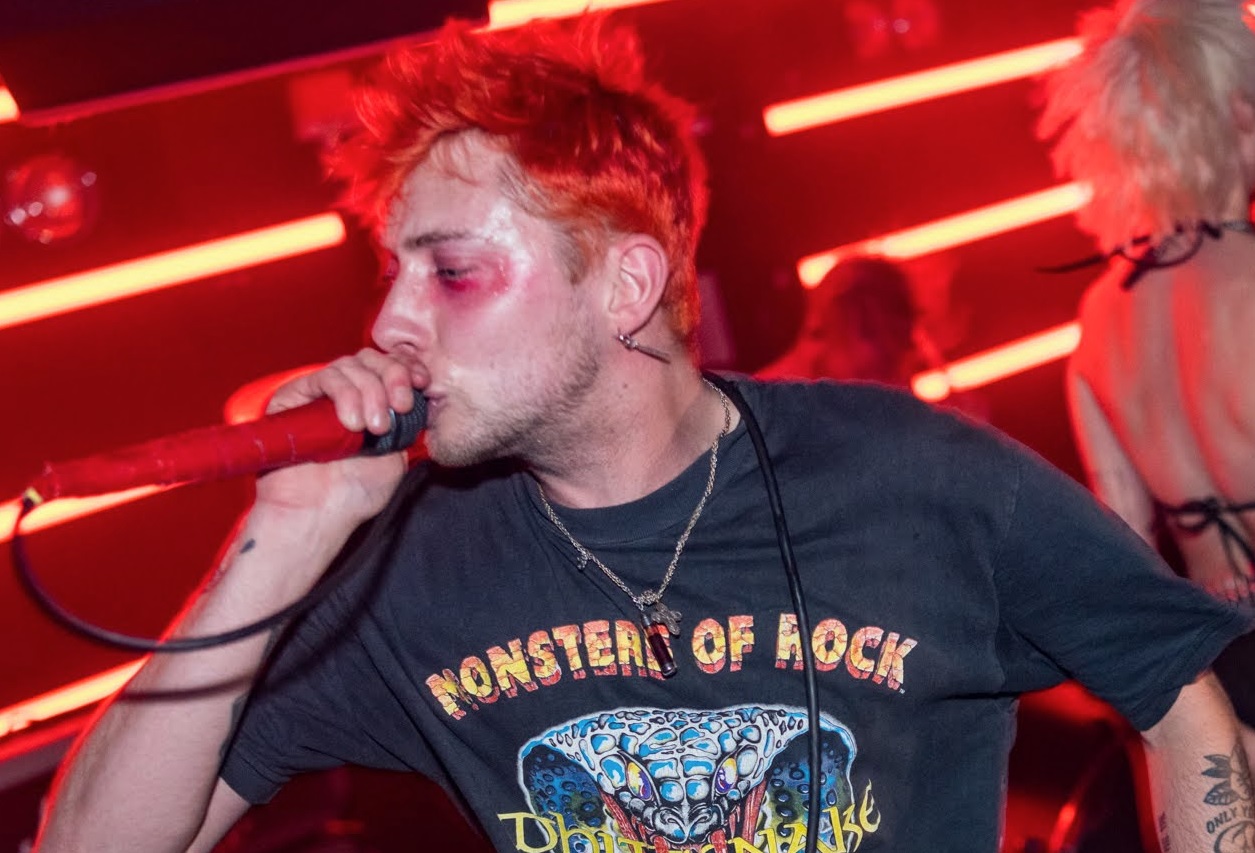 Even if you don’t come to their shows with my level of nerdy fan giddiness, Wargasm’s rise seems pretty unstoppable. There seems to be nothing the rock duo can’t do if they set their sights on it. Open Download’s main stage, standing as the only main stage band not exclusively made up of white men? Inject legitimacy and joy back into a genre as reviled as nu-metal? Reference the Untitled Goose Game in a rock song and make it sound genuinely cool? It’s all in a day’s work for the nu-metal revival’s liveliest band. 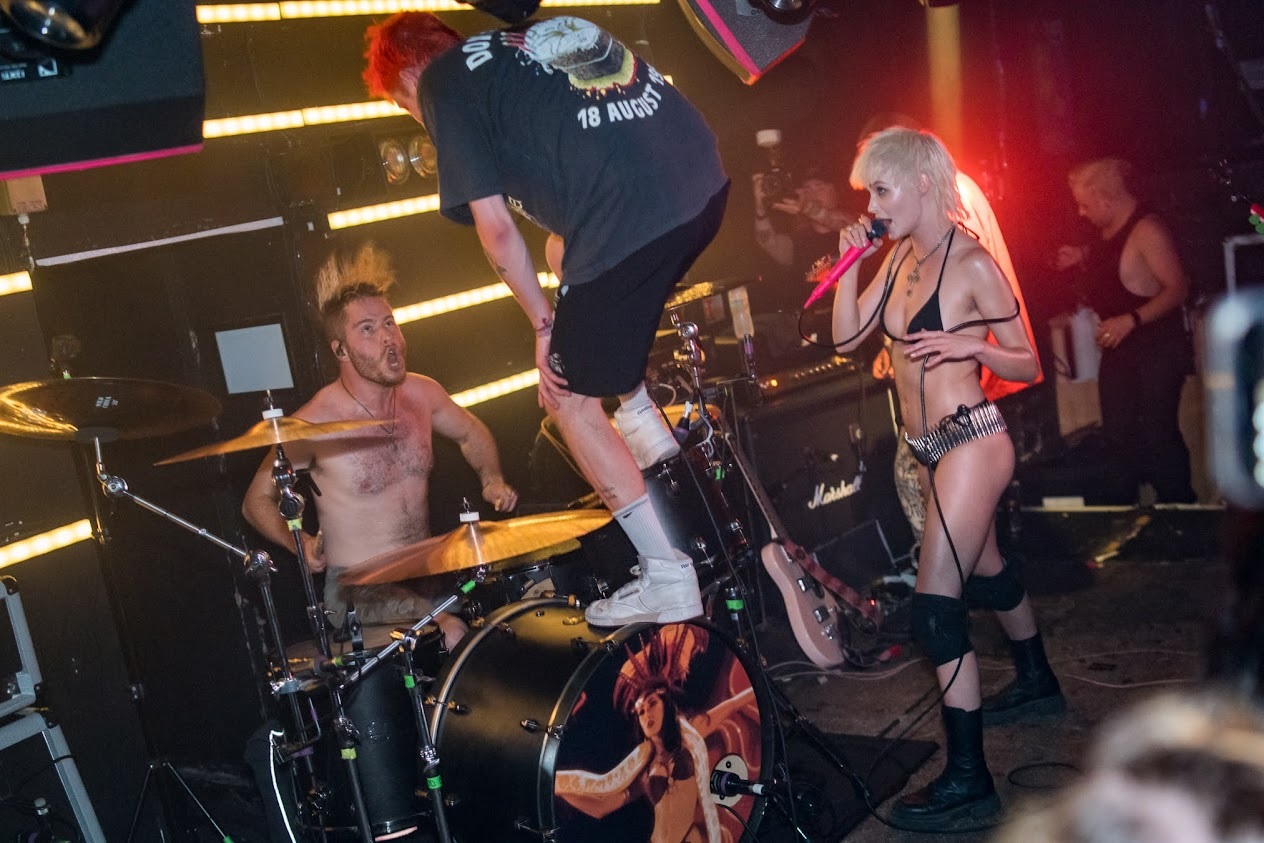 A little unexpectedly, Wargasm kicked off the month by announcing a one-off show at Patterns in Brighton. The venue’s better known as a nightclub hosting some of Brighton’s best hip-hop and electronic music nights, but even at the club nights, the chained-off stage invites moshers because of its resemblance to high-octane underground gig spaces. It’s a little left-field for a heavier band, who you’d expect to dominate the stage at somewhere like Chalk or Concorde 2, but since when were a band like Wargasm going to do what you tell them to do? 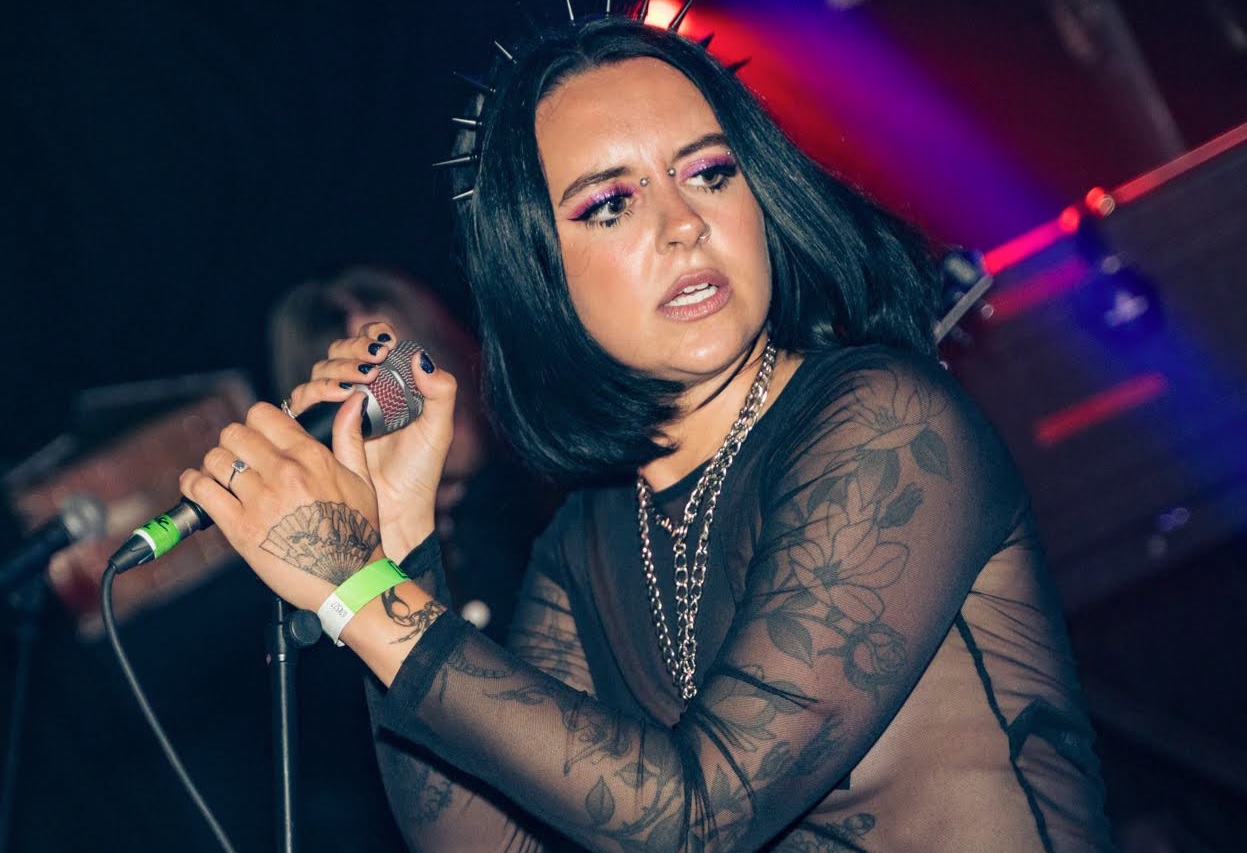 Local rising stars Knife Bride provided support, the metal influences and uncensored lyrical strategy they share with Wargasm making them an ideal fit. Fresh off the road from Donnington Park, Knife Bride’s set left fearsome doomy riffs ringing in our ears. Opening track ‘Masochist’ pretty much tells you what you’re getting from the five-piece: chilling backing vocals; guitar work on the darker and more mangled end of metalcore; and a healthy dose of sex positivity that’s endlessly refreshing for a genre so full of men bellowing thinly veiled misogynistic comments about their exes. Recent single ‘Grenade’ tackles this misogyny head-on, its barrelling riffs preceded by frontwoman Mollie Clack declaring the song to be a rallying cry against street harassment and victim-blaming. 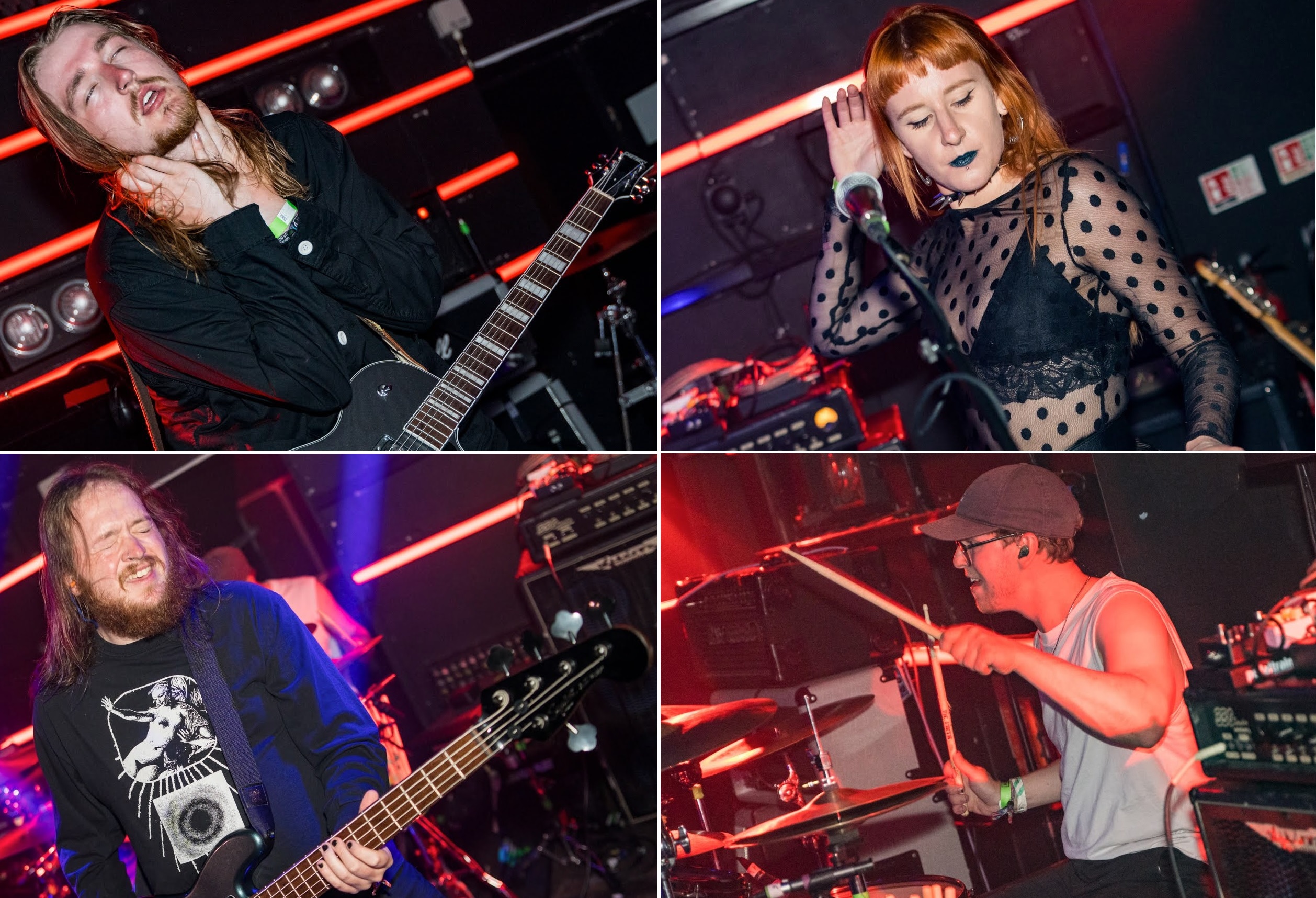 Sexuality and its potential for empowerment is a big theme for Knife Bride. Songs like ‘Tits And Teeth’ put the “heavy” in “hot and heavy”, balancing themes of seduction and righteous rage at the objectification of women with a mix of charmingly lilted phrasing and bold howls. I will say, though, that their stage presence wasn’t quite it in comparison to other shows I’ve seen them at like Green Door Store. Maybe it was the crowd’s response, which was far less eager than at other recent Knife Bride shows, but their confidence seemed a little more brittle. For a band built on nonconformity, this confidence is pretty essential; if you’re going to stick your neck out and write a song like ‘Vulture’ that decries cancel culture, you’d best convey a strength in your performance that’ll withstand the criticism the topic invites. 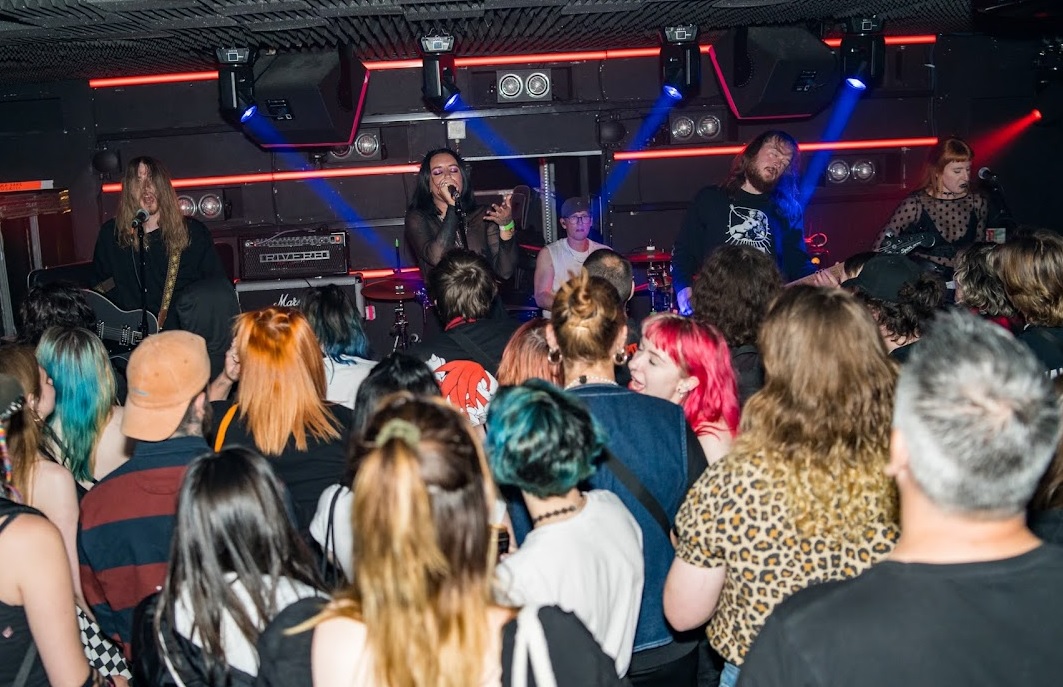 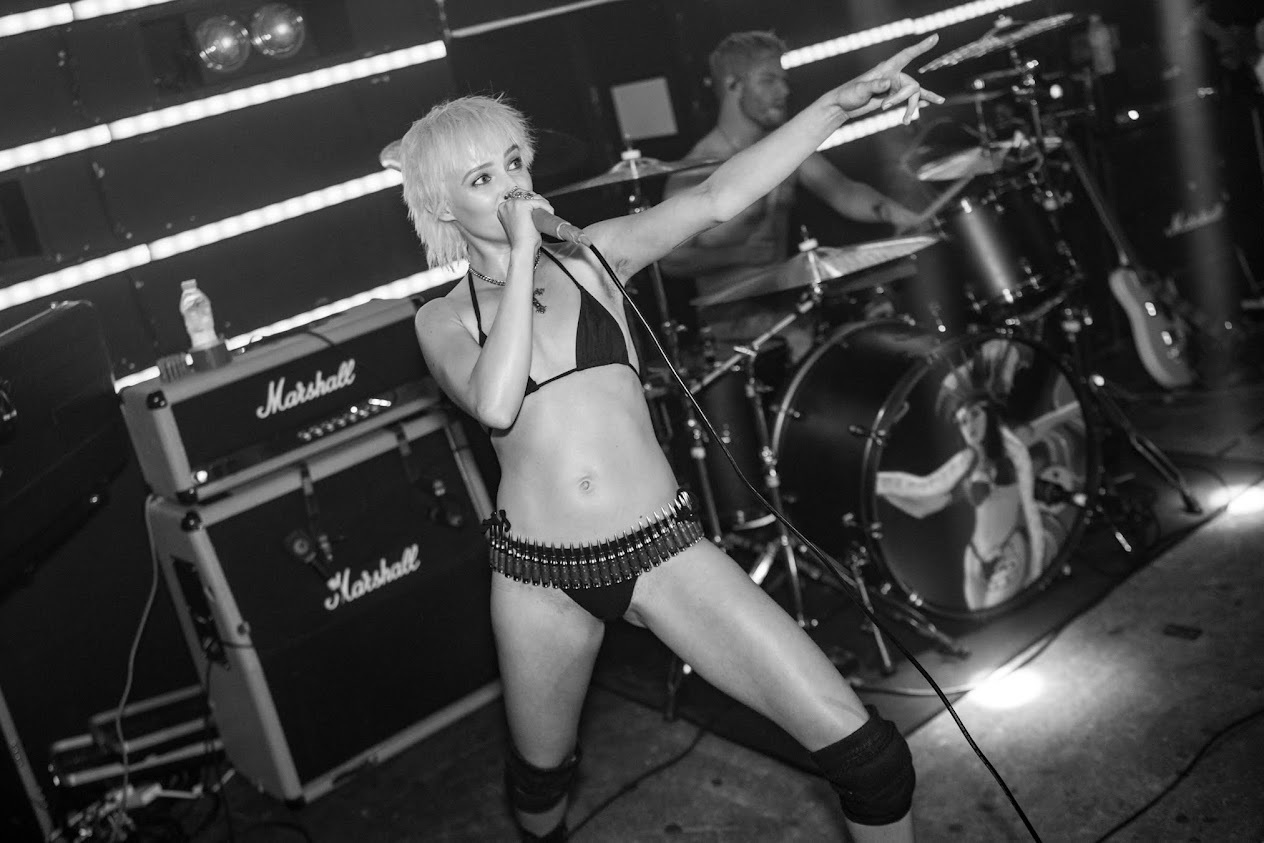 If you’re looking for stage presence, though, well, Wargasm haven’t disappointed me so far in their careers. From the moment the touring band members take their positions at the drum kits or clutching rhythm guitars, there’s a frothing anticipation in the humid air of Patterns. By the time Wargasm’s co-fronters Sam Matlock and Milkie Way storm out onto the stage, the screams are deafening. 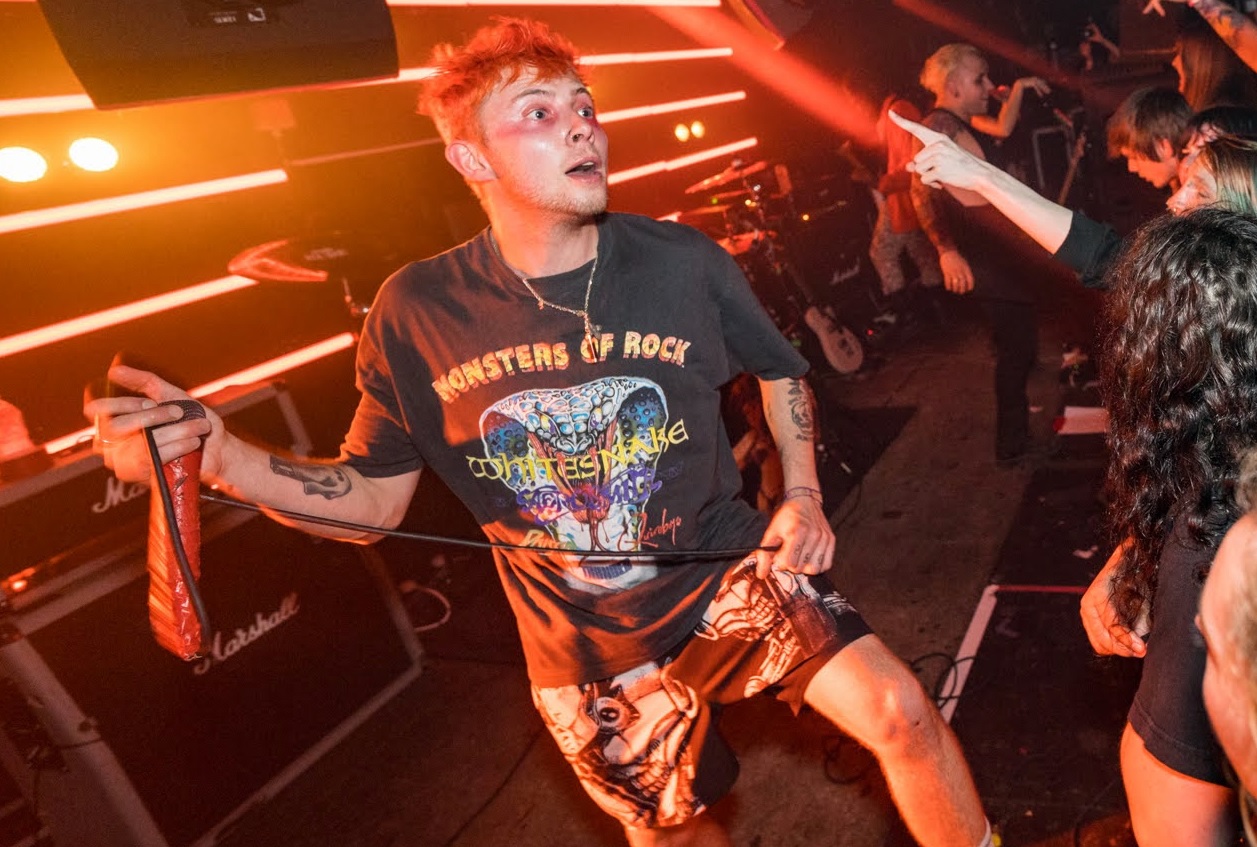 Way’s attire featuring a belt of fake ammo sets the stage for opening track ‘Minigun’, which sees the duo waste no time in firing out breakneck riffs and blast beats into the speakers. It’s their latest single ‘D.R.I.L.D.O’, though, that really turns the atmosphere from excited to frenzied. As soon as the single’s ominous industrial production kicks in, chants of “Drink! F*ck! Fight! Love!” sound from a mosh pit illuminated by strobe lights, filling the room with the hedonistic spirit that drives Wargasm’s music. Nu-metal has, historically, not been known as a genre that takes itself seriously, but in its revival, bands can make killer music while still knowing when to let loose and have fun. 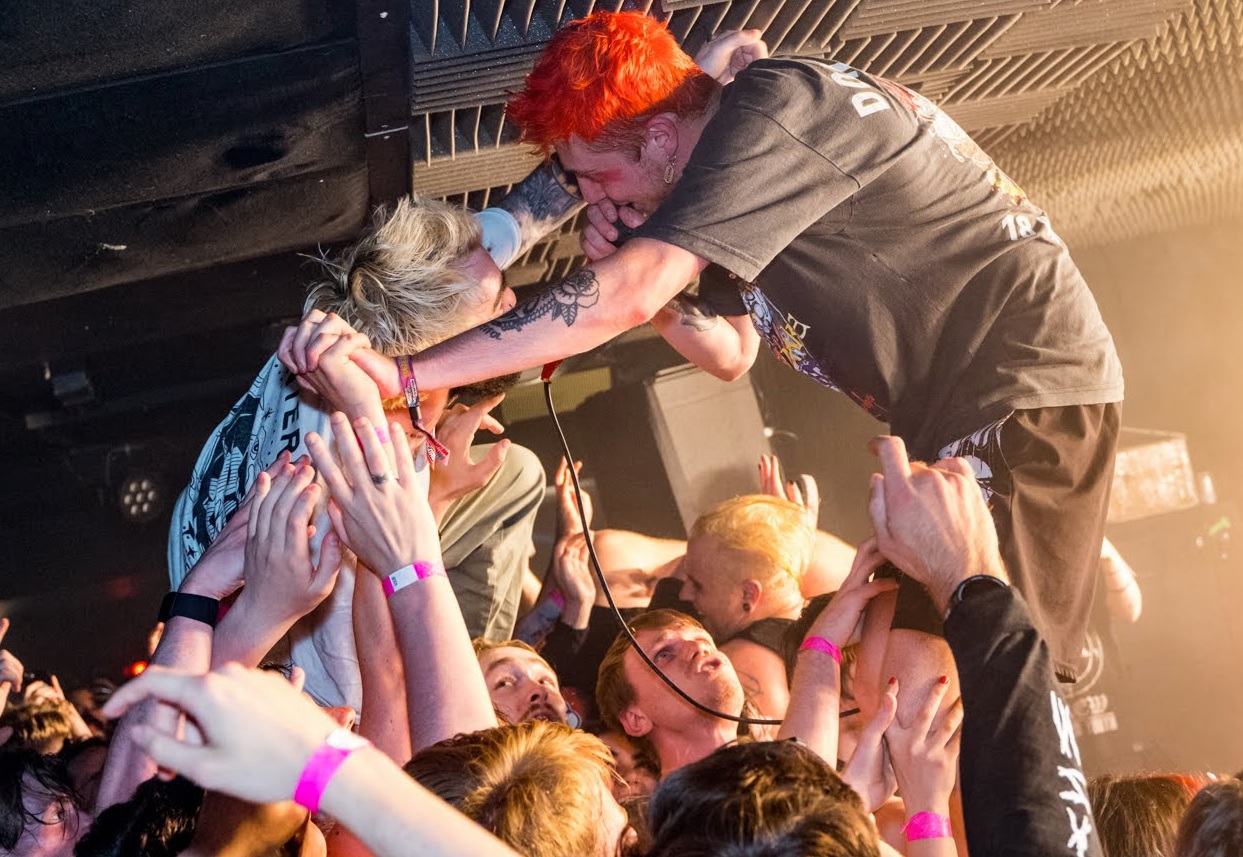 Wargasm’s core is the duelling instruments and vocal styles of its two founding members, Sam Matlock and Milkie Way, and this gig is no different. Fan favourite ‘Backyard Bastards’, an ode to the “good for her” genre of horror, exemplifies this brilliantly. Way’s high-pitched vocals on the chorus are equal parts fragility and ferocity, sharing her swagger and cockiness with Matlock as he snarls the “wanna kill, wanna kill, wanna kill somebody” refrain. What Matlock and Way match each other perfectly on, though, is their energy in their onstage antics. They clamber on the monitors, clutching at the foam ceiling for support, and generally rattle around the stage as though, like sharks staying still would kill them. The crowd responds to their incessant energy in kind by leaping up during old-school Wargasm tracks like ‘Rage All Over’ for good ol’ fashioned crowdsurfing. 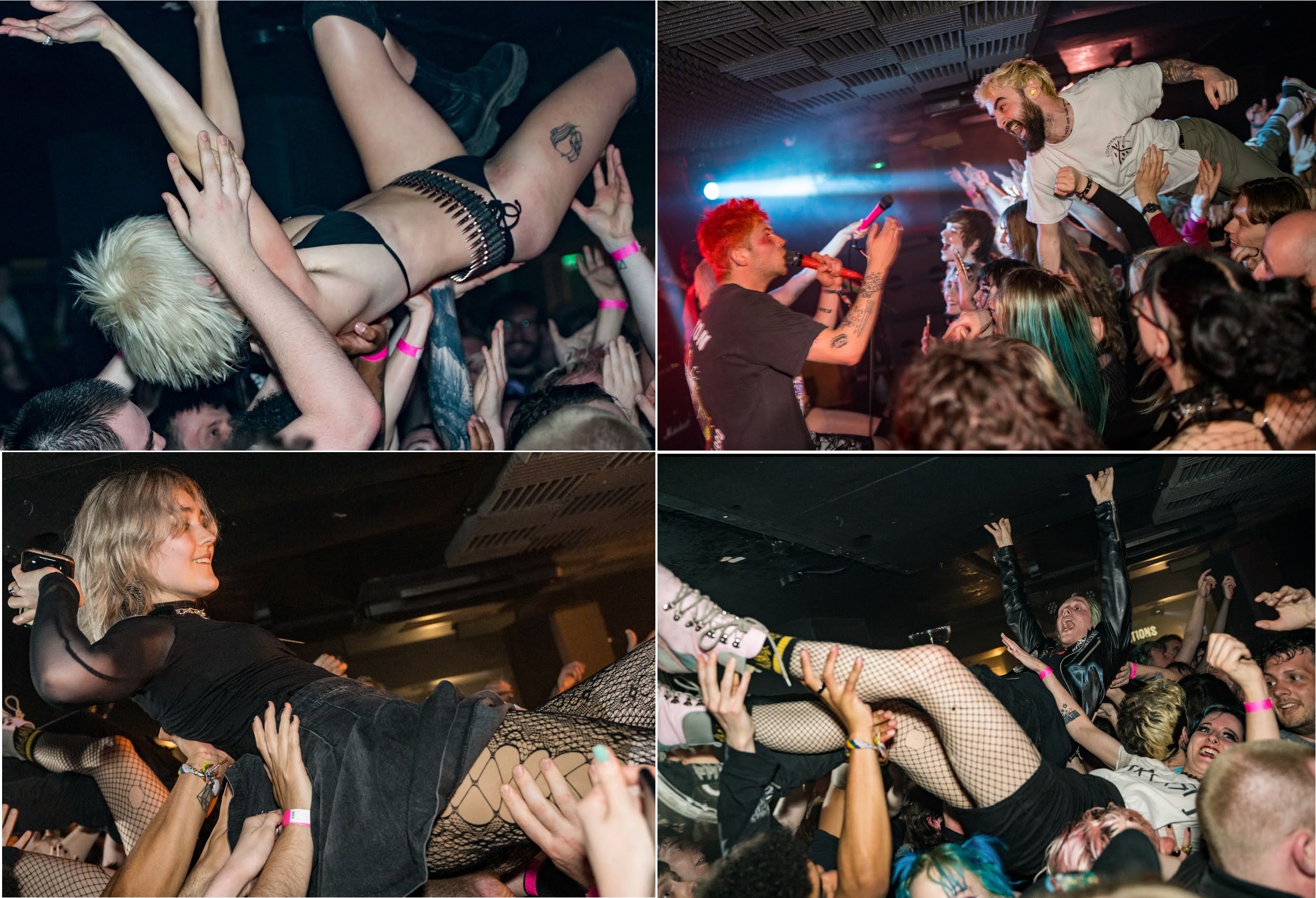 The chaos hit its peak for the last two songs of an admittedly very short set. In all honesty, I was pretty disappointed with how many of their older songs didn’t get featured – it’s not like they didn’t have the material for a longer set, but I’d assume a band as fervent in their performances as Wargasm would get pretty knackered performing a longer set. Luckily, ‘Spit.’ took us out on a high note. It’s their catchiest original song by far, with a kickass central guitar line that whirs into action like a slick guitar over-revving its engine. Transfixed under a blood red light by the nu-metal revival happening before their eyes, the chorus might start with a guttural cry of “it’s so disgusting!”, but the audience definitely disagree. 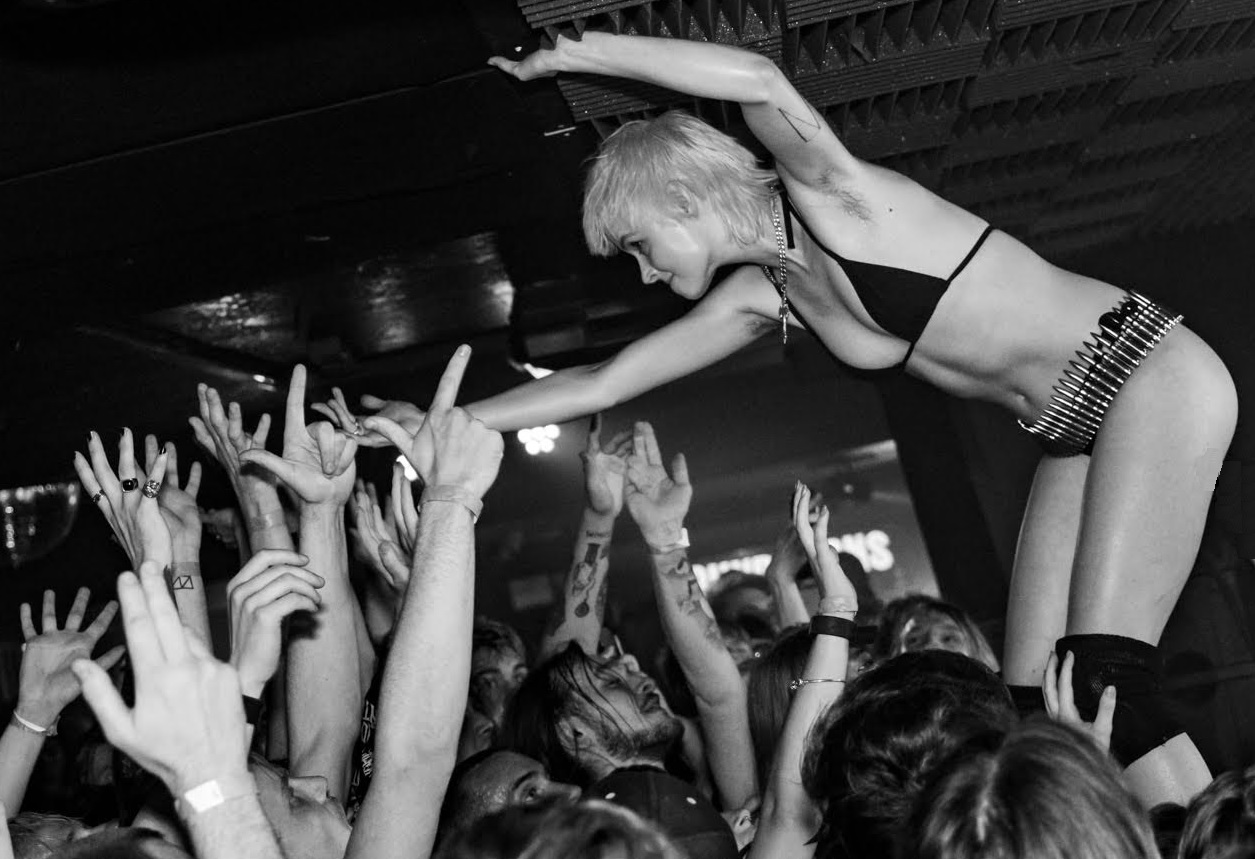 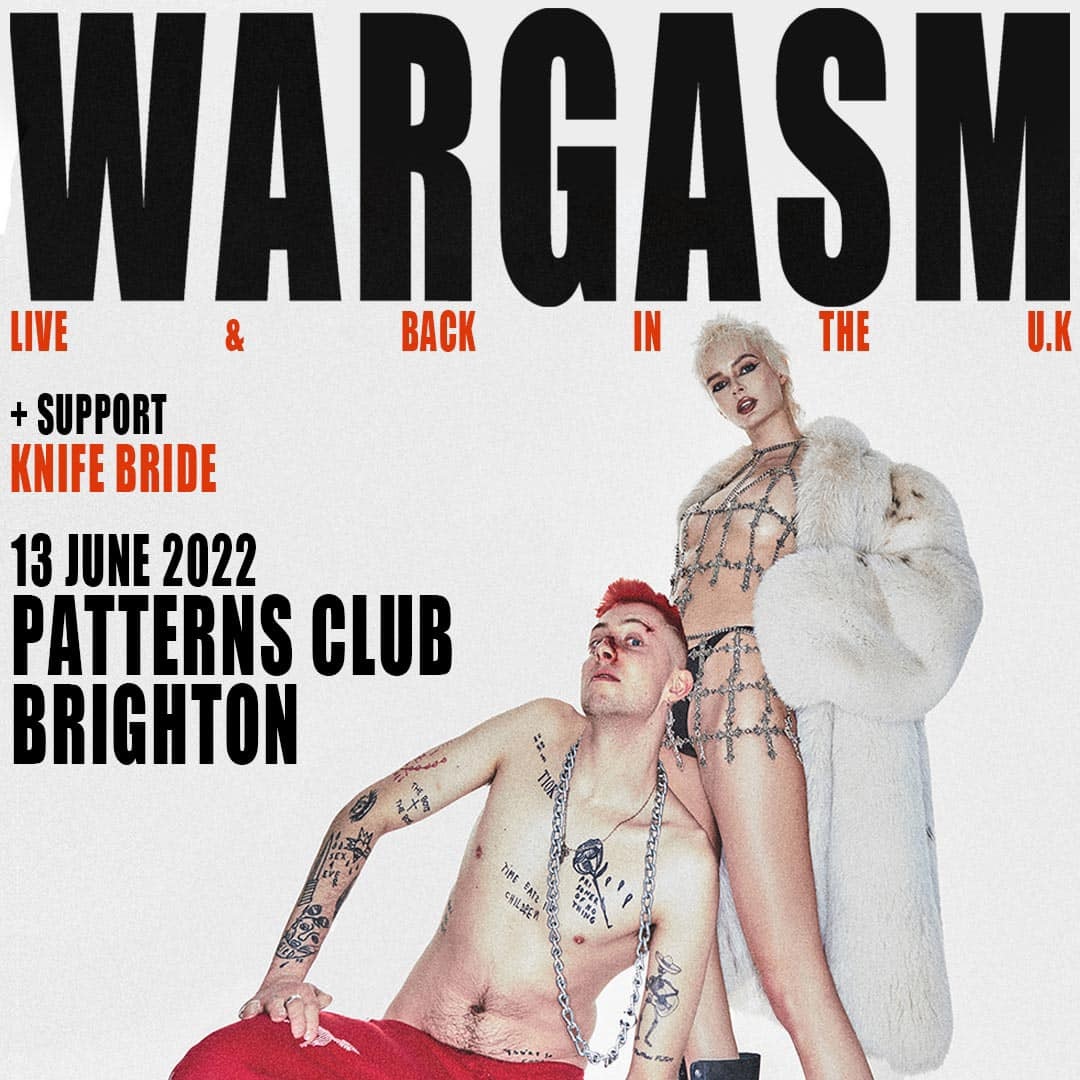