The plaque was unveiled at 4 Clifton Place, Brighton, where Normanton lived in her teens in the 1890s.

The twins, Izzy and Sophia Kilburn, were inspired to start a campaign for a blue plaque to commemorate Normanton after a school project led them to discover her grave in Ovingdean churchyard.

They learnt about Normanton’s trailblazing achievements which included a number of significant firsts – as well as her contributions to Brighton and Hove and to women’s rights.

She was the first woman to conduct a trial in America, one of the two first female King’s Counsel and the first married British woman to be issued a passport in her maiden name.

She was also the first person to leave a legacy donation in her will to Sussex University in 1957, becoming a founding funder.

The university, which is based in Falmer and currently celebrating its 60th year, went on to open its doors to the first cohort of Sussex students in 1961.

Normanton was born in 1882 and, after her father was killed when she was only four years old, she moved to Brighton with her mother, Jane Normanton, and her sister.

Her mother ran a small grocery shop and turned her family home, at 4 Clifton Place, into a boarding house. She was subsequently orphaned when she also lost her mother at a young age.

While also providing for her young sister, she was awarded a scholarship to York Place Science School, Brighton, which has since become Varndean College.

Normanton died in 1957 and said of her legacy to help found Sussex University: “I make this gift in gratitude for all that Brighton did to educate me when I was left an orphan.”

There is now the Normanton university scholarship in her name.

The girls’ application for the blue plaque emphasised that, although she worked in London, she was always close to Brighton.

Izzy and Sophia write: “This year, 2022, marks 100 years since Helena Normanton became the first woman to practice as a barrister in the UK. We think it is brilliant to be able to have a plaque put up in time to celebrate that.”

The Clifton Place blue plaque is the second blue plaque for Normanton. The first is at 22 Mecklenburgh Square, in Bloomsbury, London, where she was living when she was called to the bar in 1922. 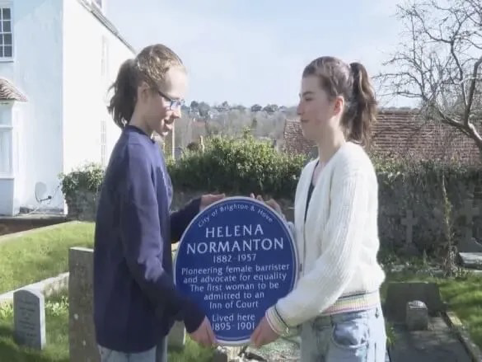 Izzy and Sophia Kilburn with the blue plaque for Helena Normanton

Helen Dancer, a senior lecturer in law at Sussex, a Middle Temple barrister and a recipient of a Helena Normanton Doctoral Fellowship at Sussex, was present at the blue plaque ceremony last weekend.

Dr Dancer said: “Helena Normanton dedicated her life to social justice and women’s rights. She was a visionary who valued education and wanted to help other women gain access to the law.

“Her determination to fulfil her vision in the face of many social, economic and professional barriers at the time is incredibly inspiring and a powerful legacy for the University of Sussex and for aspiring lawyers and academics of today.”

Sussex University vice-chancellor David Maguire said: “The extraordinary achievements of Helena Normanton KC are testament to the power of education to bring about real and positive change in society.”

Professor Maguire added: “We are grateful to Helena for her legacy gift, which helped to establish the University of Sussex, and for embodying the spirit of what made – and 60 years on, still makes – Sussex such a special university, in which convention is challenged to make society fairer for everyone.”

The Helena Normanton Society at Sussex University was founded in 2015 in honour of her many contributions.

The society recognises the foresight and generosity of Sussex legacy donors, all of whom have pledged to support one of a wide range of activities with a gift in their wills.

These include the creation of scholarships, hardship grants, academic posts, new buildings and research centres.