A shoplifter who repeatedly targeted shops in the centre of Brighton has been jailed. 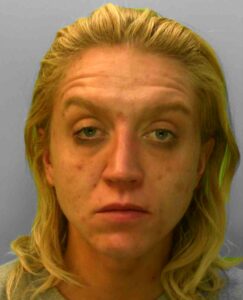 Carly Smart, 32, of Gloucester Road, in Brighton, was charged with 11 counts of shoplifting after a series of incidents between dates in April and July this year.

Sussex Police said: “Smart focused on a broad range of different stores, stealing almost £2,000 worth of goods including make-up, food, clothes and fragrances.

“From one store she even attempted to leave with a mop but was stopped by security guards.

“Many of the thefts were captured clearly on CCTV cameras and Smart was stopped multiple times by security staff and store employees before making off.

“She was identified as a prolific offender through work under Sussex Police’s Operation Apprentice, a partnership that includes Brighton and Hove’s Business Crime Reduction Partnership (BCRP) and Business Improvement District (BID) ambassadors.

“The BCRP and BID ambassadors provide vital information to help with investigations, such as timely reports to police, statements and CCTV.

“Their detailed knowledge of repeat offenders is also essential, helping to identify prolific offenders and secure prosecutions against them.

“Through Op Apprentice, officers work with the business community to identify areas and individuals of concern and work together to share information, gather intelligence and bring perpetrators to justice.

“Smart was arrested on Friday 26 August and swiftly charged with 11 counts of shoplifting.

“She pleaded guilty to all counts at Brighton Magistrates’ Court on Monday (29 August) and was sentenced to 16 weeks in prison.”

Sergeant Maria Skinner said: “Shoplifting has a profound impact on businesses and their employees – not just financially but through the emotional and physical abuse they are often subjected to.

“Prolific offenders in particular do a great deal of harm to our communities and as a police force we are committed to working with businesses to identify these individuals and bring them to justice.

“We will also continue to work with our partners in the community to address the underlying causes of this behaviour and help keep our cities, towns and villages as safe places to do business.”