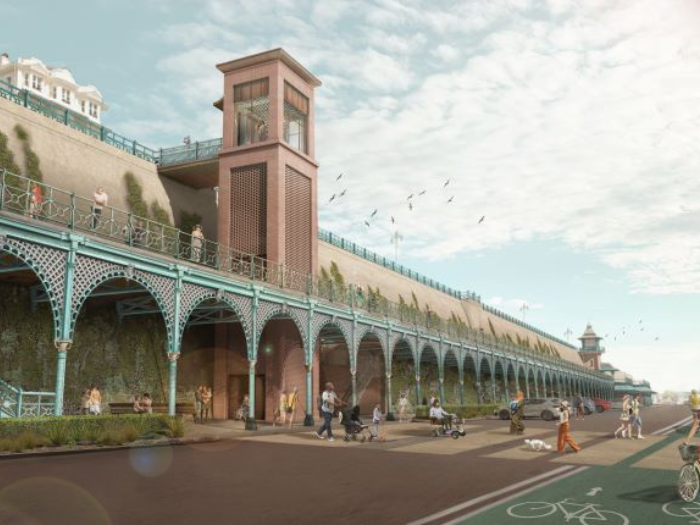 The modern design of the first of four new lifts on the Madeira Terraces does not appear to have gone down well with the public.

Brighton and Hove City Council submitted a planning application for the long-awaited restoration of the first section of the listed Victorian terraces last month.

While the restoration of the terraces themselves – and the existing lift in the Concorde2 venue – have been met with universal approval, the new lift by the Royal Crescent steps is not so popular.

Last week, the council’s conservation advisory group, made up of representatives from neighbourhood conservation and residents group, recommended the whole application be refused because of the lift design.

The minutes of their meeting on Friday state: “The principal objection was the inclusion of the new lift, the design of which is not attractive and will harm the longer views of the terraces.

“Could the restoration be completed without the new lift as the style and design is not acceptable? Views from within the conservation area are harmed the setting of the listed Royal Crescent.

“Perhaps a void could be left in the deck for a future installation?

“Connection between, and access to, the different terrace layers are important, as highlighted. Could the necessary lift structures adopt the materials and colour palette of the existing ironwork, eg Brighton Blue?”

Although only one member of the public has commented on the application itself (and is critical of the lift design), scores of people have commented on Facebook.

On the Save Madeira Terraces group, one commenter likened it to a crematorium tower, another said it was an “ugly box”.

The council’s application, written by Purcell Architects, includes several pages outlining how the final design for the lift was reached.

It says: “Although a significant intervention in the historic structure in its own right, the intervention is justified by the pedestrian access improvements it will provide to the terrace and the businesses in the area; reduce the known issue of severance, and improve access for people with limited mobility or with small children.

“The overarching strategy for the terrace proposed would eventually see several new lifts at regular intervals along the terrace. The application seeks consent for the first of these full-height lifts. 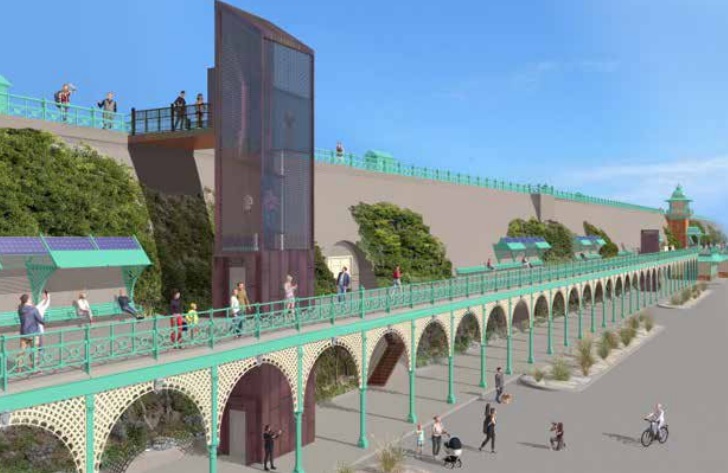 An early concept design for the lift

“Early concepts for the new lift explored metal-clad façade treatments, with solid, standing seam copper panels to the base, and an open metal fret work design to the top, with a pattern inspired by the arched spandrel panels.

“Consultation exercises were undertaken in winter 2021 and while the principal of metal-cladding was generally accepted, the design team were asked to look again at the design detail.

“The review led to further refinement and evolution of the lift design.” 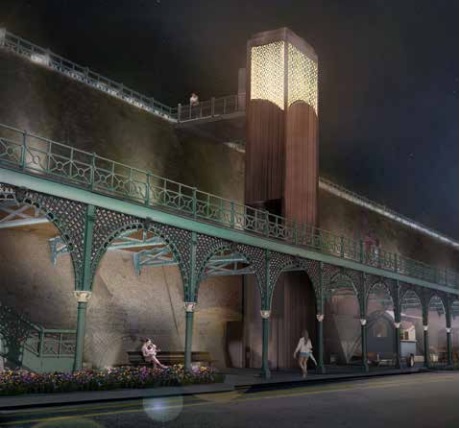 Purcell came up with variations with a metal-clad facade, brick facades, and different roof options.

It also put forward two options without a flat roof – one with a pitched roof, one with a domed roof – but in the commentary for both said: “The traditional roof form is at odds with the sharper, contemporary detailing of the brick shaft below.” 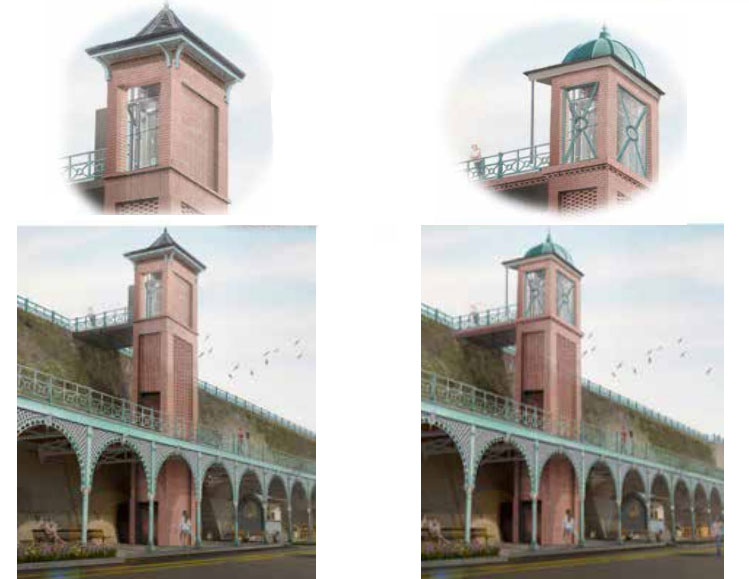 Two roofed lift designs which were not progressed

Of the final design, Purcell said: “Further refinements in the selection of the finish to the fair-faced brickwork, which should be more tightly detailed, smoother faced with tighter joints than the shaft.

“These are traditional ways of signifying a higher-status part of a building – via material specification – which are universally recognised, without recourse to crudely expressed ‘statement’ forms.

“In this respect the material expression follows the Victorian rulebook, without pastiche.”