A man attacked a woman at a bus stop in Brighton, spraying an unknown substance in her face. 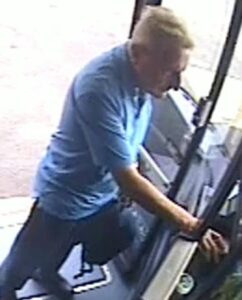 The attack happened outside the White Horse Hotel, in Rottingdean, on Thursday 1 September.

Today (Saturday 17 September), Sussex Police released a picture of the suspect and asked him – or anyone who recognises him – to contact the force.

Sussex Police said: “Do you recognise this man? Police would like to speak to him in relation to an assault on a woman at a bus stop in Rottingdean, Brighton.

“The victim was sitting at the bus stop outside the White Horse Hotel in Marine Drive when a man next to her became verbally abusive.

“He then sprayed an unknown substance in her face causing reddening and burning.

“It happened between 5pm and 6pm on Thursday 1 September and investigating officers believe the man pictured could help with their inquiries.

“He is described as 5ft 5in and of stocky build. He was wearing a light blue, short-sleeved shirt, and blue jeans.

“The man pictured, or anyone who recognises him, is asked to contact police online or by calling 101 quoting serial 183 of 02/09.

“Anyone with information can also contact police anonymously via the independent charity Crimestoppers on 0800 555111.”