Students at Brighton University have invented a device to keep people from losing their mobile phone.

Prince Ansah, who is studying mechanical engineering, is the leader of a team of engineering students which has come up with the device called Recall.

Recall is a wristband that sounds an alarm if someone strays more than 10 yards from their phone. 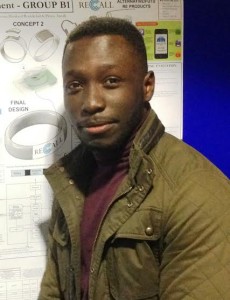 Mr Ansah is one of ten finalists in the Santander UK 60-Second Pitch Awards. The awards are intended to support and encourage university students and graduates to present their business ideas in a creative manner.

The winners are due to be announced next Monday (9 February). The first prize is £1,500.

Brighton is the only university with two finalists. The other is Melanie Smith, a graphic communication graduate from the university’s partner college Sussex Coast in Hastings.

She was shortlisted for her pitch about her new idea, Story, a mini suitcase full of ideas to help children find their imaginations to develop stories.

Santander UK managing director Simon Bray said: “In a fast-paced society as the one we live in every second counts.

“If participants are able to catch the eye of the viewers during a brief period of time, sometimes it is all it takes to kick start a success story.

“The 60-second pitch encapsulates the basic values of entrepreneurship and the academic world and putting them together with new technologies so that it can be easily accessible by the general public.

“There is a lot of talent out there and at Santander Universities we want to give all those entrepreneurs their time to shine.”