A team of maritime firefighters is to be retained after the East Sussex Fire Authority voted down an option to scrap them. 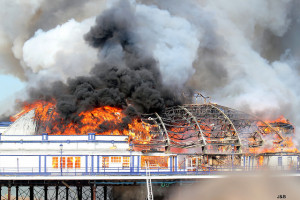 Eastbourne Pier on fire in 2014 by Brian & Jeff on Flickr

However, their numbers are to be reduced from 45 to 36 with firefighters in Barcombe no longer part of the team.

Instead, the Maritime Response Team (MRT) will be solely drawn from firefighters at Newhaven.

This will allow savings of £14,000 a year through overtime, training and equipment. No posts will be lost.

Chairman of the Fire Authority Phil Howson said: “We need to take a pragmatic approach to making decisions on service provision.

“We are fortunate that incidents at sea are rare.

“We also know that should an incident occur, they can be very difficult to tackle and specialist skills are vital. We have taken this into account when making our decision.”

Coastal Fire and Rescue Services have a statutory duty to fight fires on boats and ships, but only as far as the mean low water mark at ordinary tide.

There is no budget to fight fires beyond this point – including pier blazes such as the major Eastbourne and Hastings pier fires last year and in 2010, not to mention the West Pier fire in 2003.

The MRT had been funded by the Maritime Coastguard Agency, but has now ceased.

At a meeting on Thursday, authority members were asked to choose between three options – keeping the existing service running at a cost of £81,000 a year, concentrating it in Newhaven at a cost of £67,000 a year or scrapping it entirely. They voted for the second option.

At the same meeting, a 1.94% increase in the East Sussex fire service precept was voted through.