Sussex Police is to cut 1,000 jobs and £56 million over the next four to five years.

A further 200 support staff will lose their jobs and 300 more jobs which may be drawn from police ranks or support roles. 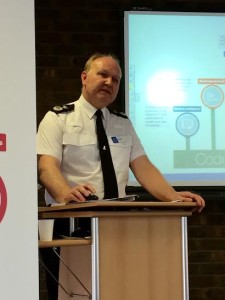 Chief Constable Giles York said that he expected less grant funding from the Home Office and that the nature of policing was changing too.

While burglaries and vehicle crimes had been falling, more people were reporting more cyber crime, including child sexual exploitation.

And Sussex Police was working more closely with other organisations to bring about better results for the public at a lower cost.

Consultants from Deloitte had analysed what the force was doing and worked with more than 200 officers and staff to find more efficient and cost-effective ways of working.

He pre-empted potential criticism of the use of consultants by saying that it would be too expensive to retain change management experts on the force’s payroll.

But it would cost less to use their expertise than to bodge the job of making the changes necessary over the next four to five years.

Sussex Police has already saved £50 million over the past four to five years, Mr York said.

He said: “Our vision for policing Sussex in 2020 is that we will be a service that protects the community, is relentless in pursuit of criminals and has an empowered workforce with integrity at its core.

“Sussex Police is an emergency service. We will be there when the public needs us 24/7 and we will build our capability to prevent crime by working even closer with the community and partners.

“However, we have to recognise what the public needs and ask them to help us by accepting that we can’t respond to every small thing that comes to our door.

“Key to the success of our model is reducing the demand on officers on a day-to-day basis so that we can continue to deliver core policing.

“It is also essential that we build understanding with everyone from the public to our partners and stakeholders so that they know what they can expect from us and the part they need to play in ensuring its success.

“My aim is to deliver policing more efficiently by embracing technology and multi-agency working, reducing costs and engaging with the public in a way that suits them and us better.

“It is only by changing the way we deliver our service that we will be able to maintain the level of public safety we have achieved in Sussex.

“It’s absolutely paramount that we respond when people face significant risk and harm.

“I am starkly aware that there will be a lot of public interest in how this will affect them and I am also aware that some will experience a reduction in some parts of policing that are very dear to them.

“We will continue to prioritise crimes that cause the greatest harm to victims and the community such as harmful anti-social behaviour incidents.

“Often the police are called on to respond when it’s not our place. The simple fat is that we can no longer respond to issues which would be more effectively dealt with by other providers or by working in partnership. 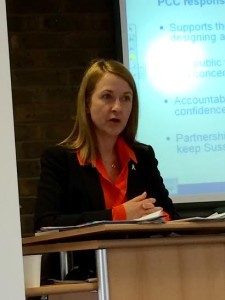 “An example is our successful street triage scheme which pairs mental health nurses with police in resolving emergency responses to those facing a health crisis and giving them a better alternative to police custody.

“It is this kind of thinking we need to apply across our business.”

Police and crime commissioner Katy Bourne said: “The chief constable has had my complete support in designing a new local policing model for Sussex that’s fit for the 21st century.

“I have been very impressed by the business-like approach Sussex Police has taken to this design process, which has involved several hundred officers and thousands of hours’ work.

“I have provided constructive challenge throughout this process, representing the public’s interests and their likely concerns.

“There will be changes that I know some residents may not feel comfortable with straight away. That is why I will be watching closely – and continuing to engage directly with members of the public – to ensure these changes are clearly communicated and understood.

“This is a long-term, five-year plan. The new Sussex Local Policing Model – and the changes within it – will not be rolled out overnight.

“I will be asking partners and the public to feed back their comments and concerns to me at every stage.

“My ongoing challenge to the chief constable will be that the new model must maintain public confidence and reassurance while delivering an effective and efficient police service.

“Everyone has a part to play in reducing and preventing crime. I will continue to work closely with the police, partners and the public to ensure we all take responsibility for keeping Sussex safe.”