A giant graffiti mural painted on a house in Viaduct Road in response to a council request to spruce it up is being investigated by council officials. 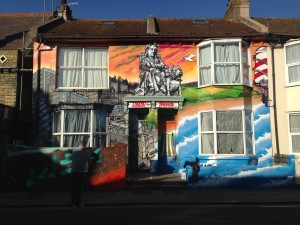 Brighton artist Aroe MSK painted the mural across two house fronts in Viaduct Road on Saturday, having been commissioned by the landlord.

He said he had been asked after residents in the street had been issued with a “cheeky” request to tidy up their houses.

Today, Brighton and Hove City Council said it was investigating whether it would be taking any action over the mural.

A spokeswoman added: “Local residents and the local area action team have told us they are concerned about the number of properties on Viaduct Road in a poor state.

“We are investigating and a letter has been sent to all properties asking for their help to improve the appearance of the street. This includes works such as clearing rubbish from front gardens and re-painting properties.

“We will continue to work with and support the community to improve the area.”

Brighton and Hove City Council has previously required businesses to paint over murals which breached advertising guidelines, including two Western Road restaurants, A Taste of Sahara and Pie Society.