More sections of the Madeira Terraces have been closed to the public this week after new structural problems were discovered. 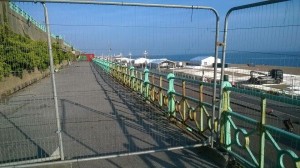 Fencing went up on Thursday preventing access to the walkway above the Jag Gallery in Madeira Drive.
And Brighton and Hove News understands that artists working in the studios beneath have been told they may have to leave within days because of structural issues.

“A council spokesperson said: “Work has been ongoing for some time to address structural issues affecting the Madeira Terraces.
“Our most recent structural survey uncovered issues with the Jag Gallery building.

“We are in regular contact with the tenant as we explore the implications of these structural issues.

“As a precautionary measure we have put up safety barriers to prevent public access to the affected area.”

Ken Frost, a company director with an interest in a nearby seafront business, said: “New barricades have been put up to stop people walking along yet another part of the decaying crumbling seafront, just above Jag and associated galleries.

“The east side of pier seafront is being allowed to rot, crumbling structures, empty buildings and rusting green railings. Skidrow On Sea is a more appropriate name.”

Parts of the Grade II listed structure were first closed off in December 2013.

The council says the problems relate to the corrosion of internal supporting beams and bolted connections within the concrete infill deck.

The concrete therefore needs to be carefully removed without disturbing the brittle cast iron. Any work needs to be approved by English Heritage.

In March last year, the council’s seafront scrutiny panel was told the council had set aside £0.5million to start work.

But in April, the collapse of the Fortune of War arches and the subsequent closure of the A259 for nine months refocused attention on repairs west of the pier.

Last month, the council was given £9m by the government to rebuild the arches under the A259 and the old shelter hall.

However, it’s estimated the total cost of seafront repairs is £100m.