Albion boss Chris Hughton said he will keep pushing and persuading the players in pursuit of breaking the team’s goal drought. 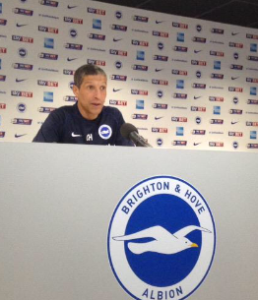 Speaking at this morning’s pre-match conference, Hughton said: “You have to be postive and analyse games – we had 65% possession against Huddersfield but they made it very diffucult for us.

“They worked very very hard in midfield and played a real compact team. We weren’t good enough on the night to open them up to a degree that gives us real opportunities.

“You have to look, are the team working hard enough and trying hard enough? And they are, that’s one thing I can’t accuse them of.”

Hughton said he had told the wide players to support and get in the box more.

He said Carayol had done this and had the best chance of the match when he hit the bar.

Albion, he said, have found areas were more quality and guile is needed difficult of late, but he will keep banging that same drum and try to get the players into the right areas.