Brighton College has lodged an appeal after its plans to put up a £6.5 million classroom block were turned down by Brighton and Hove City Council.

Officials recommended granting approval for the scheme – part of a bigger ten-year master plan for the expanding public school – but the council’s Planning Committee voted against the proposal.

The appeal will be heard by a government-appointed independent planning inspector who will weigh up the arguments for and against the scheme at an informal hearing. 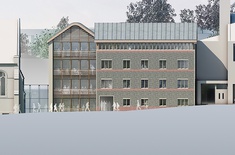 It is expected to take place later this year or early next year and follows an appeal by Sussex University after part of its master plan was rejected against official advice.

The Brighton College plans involve demolishing the old swimming pool and music school buildings and replacing them with a five-storey classroom block.

The new building would be linked to the grade II listed Great Hall and the Skidelsky building.

As part of the scheme an elm tree would be felled and replaced with other elms elsewhere on the school’s campus.

The loss of the elm was the reason for refusing permission for the new classroom block.

Among those to question the proposal to fell the elm – and to vote against the Brighton College scheme – was Councillor Alex Phillips.

Her husband and fellow Green candidate in the local elections Tom Druitt campaigned beforehand to preserve the tree.

When a council committee previously agreed a revamp of the Seven Dials, Councillor Phillips was one of those who voted for the scheme which involved felling an old elm.

Mr Druitt then camped out in the tree to save it – successfully. This time he just blogged about the threatened elm before the Planning Committee meeting.

A date has been set for a public inquiry into plans by Sussex University to build homes for more than 4,000 students on its campus in Falmer.

The Planning Inspectorate said that the inquiry would be held at Brighton Town Hall on Tuesday 20 October.

The scheme also included a proposal to build a new life sciences centre, replacing academic buildings that were increasingly outdated. It is part of the university’s master plan.

The new homes – replacing more than a thousand old bedsits – were intended to lessen the pressure on local housing stock as the university continues to grow.

Planning officials had recommended approving the scheme but councillors felt that it would be too much.