‘We make the biggest difference by working together,’ says departing Brighton and Hove council leader

His party had, he said, published an end-of-term report called What have the Greens done for Brighton and Hove? The report said that the party had implemented 85 per cent of the policies that were promised in its manifesto four years ago.

Councillor Kitcat wrote: “At midnight on (Sunday) 10 May, I will cease to be a councillor and so cease to be council leader.

“I’ve had eight fascinating and busy years on the council, with the last four in minority administration.

“In that time we have experienced emergency budgets, huge cuts in funding, a move to – and from – the cabinet system of governance, the creation of the Greater Brighton city region, numerous council by-elections, industrial actions, acres of media commentary and a groaning shelf of awards.

“On becoming the biggest party in 2011 more than half of our group were first-time councillors and our party had never led a council in the United Kingdom before.

“It was a steep learning curve but – thanks to plenty of support and advice – we were able to face up to the significant challenges facing the city.

“We’ve delivered some huge achievements, including finally dealing with equal pay and allowances for men and women across the council, the dirty secret that had been left to fester for far too long.

“We set about making our roads safer and transport more sustainable. This work is paying dividends, with fewer casualties, cleaner air and record use of buses and bikes.

“Our ambition and delivery for Brighton and Hove has been recognised in many ways including as the world’s first One Planet City, the 2014 Civitas European City of the Year for Sustainable Transport and as part of the UK’s first new UN Biosphere Reserve in more than 40 years. 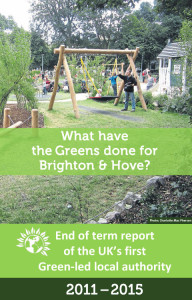 “Our work on the living wage and apprenticeships not only brought them to the council but also encouraged partners in the city.

“Now, one in five (20 per cent) of all UK living wage firms are in our city, thanks to that leadership and a great partnership campaign with the Chamber of Commerce and Unison.

“Indeed, that success points to an essential truth of this role. Even when leading a big organisation like the council, there is little that we can achieve alone.

“This is an age of collaborative leadership and partnership working. As with the living wage campaign, we make the biggest difference for citizens by working together with partners across the public, private and third sectors.

“We are lucky that, in Brighton and Hove, we already have so many great people working across the sectors who are passionate about this essential partnership working.

“Collaboration at the national and European levels has also been vital. We now have strong friendships between cities and local government associations which need to be maintained.

“We are also lucky to still have vibrant local media, supplemented by a fizzing political sphere on social media.

“These are vital to holding leaders to account and helping to engage citizens in the big challenges facing our city.

“I do wish we had been able to engage even more people in the debates around the council budgets but still the numbers involved did grow each year.

“Overall, despite a few nasty interludes, I’ve found being active on social media to be incredibly important in connecting me to people, issues and events in and around the city.

“I’ve sought to be an open and accessible leader while encouraging the council to move to greater openness too.

“Also, in the spirit of openness, we as a Green administration have published an end-of-term report that shows that we have delivered on more than 85 per cent of the 195 pledges we made in 2011.

“Those achievements have been possible only with the hard work of many council officers and partners.

“I’ve no doubt that the council’s morale and performance is much better than it was four years ago. That improvement shows, as we have just leapt an unprecedented two grades up to Investors in People Silver status.

“We are very fortunate to have an incredible cadre of officers working for us – true public servants who work so hard with such passion, integrity, creativity and talent.

“As I pass the baton on, as new challenges inevitably arise, I believe I leave the city and our council in a better condition than they were four years ago.

“No matter who or what comes next, in me you will have a lifelong champion for the great city of Brighton and Hove.”