Election result: Simon Kirby holds Kemptown for the Conservatives by a whisker

The Conservatives have held Brighton Kemptown – but with a reduced majority, bucking the trend across the country.

Simon Kirby picked up 18,428 votes, while his his Labour chall 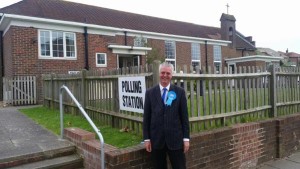 After being declared the winner, Mr Kirby thanked the other candidates, his wife and family and voters.

He said: “I will continue to work hard for all of you regardless of which party you support.”

In third place Ian Buchanan from UKIP won 4,446 votes while Davy Jones from the Greens came fourth with 3,187 votes and Lib Dem Paul Chandler fifth with 1,365.

The count was delayed because of uncertaintly over a number of ballots which it was not clear whether had been spoilt or not.