A Brighton student fell 20ft through a skylight at a building on Falmer campus and two more were rescued from the roof after dissertation celebrations this week. 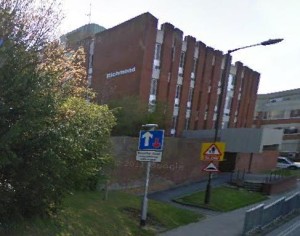 The Richmond building on Falmer. Image taken from Google Streetview

The 24-year-old and two others climbed onto the roof of the Richmond building on Boiler House Hill but then fell through the glass skylight at about 6.15pm on Monday.

The road was closed and buses diverted while paramedics attended the casualty and the fire service rescued the other people on the roof.

“The student was treated at the scene by paramedics and is currently recovering in the Royal Sussex County Hospital in Brighton.

“The safety of our students is of paramount importance to us and we are in the process of compiling a full incident report.”

The accident followed Dissertation Deadline Day, which saw hundreds of students celebrating handing in their dissertations in an event organised by the University of Sussex Student Union by Falmer bar.

However, the union was keen to stress there was no reason to believe the accident happened because the students had been drinking.

“This year students celebrated with dodgems, candyfloss, music and a BBQ.

“We have no reason to believe this incident occurred due to those involved being under the influence of alcohol.

“The safety and well being of our students is of the utmost importance to us, and we’re pleased to hear the student involved is recovering well from the incident.”

A spokesman for South East Coast Ambulance Service said: “We were called at 6.15pm to reports someone had fallen 20ft through a pane of glass.

“A man had sustained a cut to his arm. A neck collar and vacuum mattress were used for potential other injuries.

“He was assessed for the arm injury and taken to the Royal Sussex County Hospital.”

A police spokeswoman said: “Emergency services were called to York House at the University of Sussex in Refectory Road, Falmer, at on Monday after a report of a man having fallen through a skylight of the building.

“He and two others had climbed onto the roof.”