London Road set to get its third pound shop

London Road is to get its third pound shop with the imminent opening of a Poundworld in the old Co-Op. 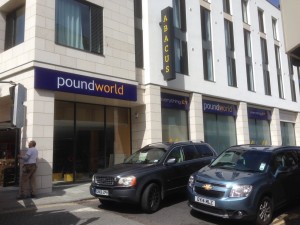 Although the busy high street has seen a renaissance in recent years, particularly in the case of new restaurants and bars, it is still struggling to shrug off its downmarket image.

The influx of students, with many now living in the Abacus apartments above the Co-Op shops and more due to move into student housing being built in nearby Ditchling Road and Circus Street.

But although trendy pubs and bars have no difficulty attracting the student pound, it seems upmarket retailers are less attracted by the prospect.

Now, with the signs up and a planning application in, Poundworld is placing itself to take advantage of tight student budgets.

Chair of the London Road Town Team Ann Townsend said that while it would have been better to have had a different type of shop, it was good the unit was let so quickly.

She said: “We think it’s a good thing that a shop has moved in so swiftly – before the shop was finished they had earmarked it.

“On the other hand we would liked to have seen a more general mix of retail outlets. We still feel the London Road can do with other things.

“If you ask anyone down the London Road what they would like to see it’s clothes and shoes, but they’re not coming down there.”

London Road is already home to another branch of Poundland, as well as the 99p store. It also has a Poundstretcher which sells goods cheaply, but at a range of different prices.

Another pound shop, Poundsense, closed down in 2011 and subsequently became a PDSA charity shop.