Young girls ‘threatened with knife’ by children at traveller camp

Police were called to the traveller camp at Hollingbury Park this afternoon after reports two young girls had been threatened with a knife. 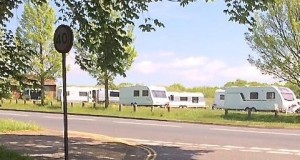 The camp at Hollingbury Park today. Image by BHEAG

Samantha Marshall went to the park with husband Daniel and daughters Megan, 12, and Scarlett, five, for a picnic lunch.

The girls then went to the playground but to Samantha’s horror they soon returned sobbing and distressed.

Samantha said: “My elder daughter came over and said that she had been attacked on the floor by some boys from the traveller camp.

“She said that they had a knife and they tried to stab my younger girl, Scarlett.

“She pointed out the boys to me and they were only four to six years old. I was really shocked.”

She said when she approached the group, they swore at her and told her to get out of the park and showed her the knife.

She said: “My husband decided enough was enough, and we called the police straight away. They came with their dogs and had a look to see if they had a knife.

“But they couldn’t find it, and there’s nothing else they can do at this moment except put it into the system so it’s flagged up if there’s another incident.”

A spokesman for Sussex Police said a report had been made of a small child on the site holding a cutlery knife – but Samantha says she is certain the knife she saw was a serrated, wooden handled bread knife.

A police spokesman said: “There have been no injuries or damage, and no arrests.

“There have been several calls to police from concerned local residents and there was a report today of a small child on the site holding a cutlery knife, but no evidence was found to substantiate that.”

A council spokesperson said: “A group of travellers who were at Hollingbury Park last week moved on at the weekend.

“We had a legal writ ready to move them but they went of their own accord.

“We have carried out welfare checks jointly with the police on the group of travellers currently at Hollingbury Park.

“We will be securing a very quick eviction of this group by using the previous unused writ.”

The travellers at Hollingbury are believed to be those who were evicted from both Woodingdean Memorial Cemetery and Preston Park yesterday.