Abusive parents have been blamed for the withdrawal of a lollipop man from a church primary school in Brighton.

They became abusive most recently when their number plates were noted down because their cars were parked on the “School Keep Clear” markings outside St Martin’s Church of England Primary School.

This obstructed views for the lollipop man, making it unsafe for him and for children and those accompanying them, according to a letter from Brighton and Hove City Council.

The incidents come after one mother asked an elderly resident of a neighbouring sheltered housing block, Old Viaduct Court, if she wanted a fight in a row over parking. 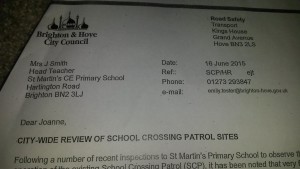 Some parents park without permission in the Old Viaduct Court car park, opposite the school, in Hartington Road, and have been abusive and threatening when challenged by staff or residents.

After the latest incident, the school newsletter to parents said: “We are disappointed to advise that our school crossing patrol officer has been withdrawn for the immediate future.

“We have attached a copy of the letter received last week from the LA (local authority or council) but sadly this latest incident of abuse has given them the justification to remove the service as of now.

“The road safety manager was on site this morning and again noted the following vehicles parked without due regard to the safety of children and other road users.”

The newsletter said: “The loss of this valuable service is sadly the result of the actions of the few.”

The letter to Mrs Smith came from Emily Tester, in the council’s Road Safety Team, on Tuesday 16 June.

The letter said: “Following a number of recent inspections to St Martin’s Primary School to observe the operation of the existing school crossing patrol (SCP), it has been noted that very few pupils and parents/guardians used the SCP facility to cross Hartington Road.

“In addition, several parents were regularly observed to park on the School Keep Clear road markings, some for up to 20 minutes.

“I am therefore writing to advise you that, as a result, retention of the School Crossing Patrol site in Hartington Road is under consideration for relocation.

“As you will be aware, the factors supporting the provision of a SCP include sufficient demand by pedestrians on foot for a surface crossing point.

“Other sites in the city meet this requirement and we are therefore compelled to review provision frequently. 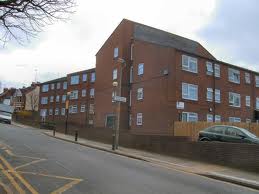 “In addition, one of the key factors that require being satisfied is the health and safety of the officer appointed to provide the service.

“The inspections at Hartington Road indicate that insufficient demand exists for a SCP facility.

“Furthermore, there is evidence of a clear disregard by parents of the road safety objectives of School Keep Clear markings and the impact that violation of these has on the safe operation of the SCP.

“When approached by officers recording usage, some parents were abusive and as a result the vehicle licence numbers below were recorded.

“I am sure you will agree that removal and relocation of the SCP facility will cause significant concern to some parents who regard the service as beneficial.

“The school has a key role to play in ensuring that the road safety and operational benefits to parents are clear and I am therefore asking you to write to parents reinforcing these points.

“The SCP is present to assist crossing movement and if parents do not require this service we will relocate it.

“In addition, School Keep Clear markings serve to create a safe visibility splay for the patrol officer to determine a safe and convenient time to cross child pedestrians.

“Any obstruction of this splay by parked vehicles constitutes a hazardous work environment which means that the patrol should not operate.

“The road safety manager has recently authorised improved traffic signs and flashing warning lamps for the site and this is a good opportunity to make parents aware of their need to improve parking behaviour.”